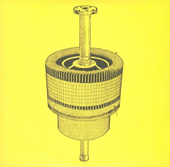 “Typically he’ll write about his provincial, low-life upbringing in the Scottish Borders or the extremes of relationships. Sometimes though, he’ll write about gangs of giant seagull queens or wrestling granite saints in order to gain access to heaven.” That’s one third of FOUND’s assessment of their lyricist and singer Ziggy Campbell, whose recent second wind has seen the band signed to Chemikal Underground. It’s also seen them shed two former members, clearly not afraid to break eggs in their hunt for the perfect omelet. For factorycraft, renowned engineer Paul Savage has been brought in to help too, and does by doing what he does best for the other hits on the label: carefully weed out the cheaper wizardry that gives the album a definable era, and strap the mics as close as possible to the guitar and drums so that they thud, even for quiet tracks. Forty-one minutes later and the end result is an engaging record with no obvious single material, but whose scientific balance of lust/indie hooks/amplified Scottish accents harks back to the glory days of the nineties. In short, factorycraft is art rock at its sharpest: loud, melodic, and filled to the brim with smut.

The one thing it isn’t, however, is decipherable. Campbell’s two backgrounds—one working on assembly lines, the other not shaving and writing intelligent ballads—has left him brilliantly confused, like the son in a TV kitchen sink drama. “Your legs are coated with anti-climb paint / But I try / And climb them all the same,” he coos upon meeting his date in the album opener, weighing a night spent robbing his own workplace against a night convincing women to fall in love with him. But which topic will make the more interesting song?

Luckily, FOUND don’t let him answer, and jam their way around further questions by dressing Campbell’s angst up in disco rock, bits of which are more than a little familiar. If you’re even half aware of “Just Like Honey” by the Jesus & Mary Chain (i.e., if you’re 31, or one of the 13,302,651 people who made it to the end of Lost in Translation) your jaw will drop as Tommy Perman and Kev Sim brazenly computerize its drum beat. Your jaw will drop, but your feet will fidget: “I was born to use my hands,” bellows Campbell, followed by a torrent of Game Boy noises as the track jumps into UK garage. This isn’t just the moment where the producer tries the band in baseball caps to see how they’ll sell to estate kids—this is a twee band pulling off an actual IDM breakdown, complete with lyrics by the last remaining worker who refuses to use Microsoft Office.

When not contemplating a job change, Campbell shifts his focus back to relationships, especially whether or not to sustain one, scowling like the hero in every Alan Sillitoe book he’s probably read the living shit out of. Between the surf rock and duck calls of “Johnny I Can’t Walk the Line,” he worships a girl who’s a very long way from June Carter, a “girl who likes to draw scenes from Invasion of the Body Snatchers.” And only a bona fide Scotsman could make “can’t” rhyme with “Johnny” the way Campbell deftly does. If that’s not gritty enough, he gets more personal on the follow-up, “Every Hour That Passes,” where, to a chorus of crap guitars and keyboards, he drunkenly attempts an old sex position. Lyrically, you don’t want this anywhere near a prospective partner, but musically, the band will hook you onto the dance floor, pulling strings to get tired libidos and perpetrators of clumsy hook-up disasters hungry and thrusting again.

And then, finally, there’s factorycraft‘s own arts segment where FOUND get devious, rabidly bending various indie-rock conventions to see if anything works. Four out of five times, it does: the acid disco attack of “Lowlandless,” for example, or the ambience/final slap of “Blendbetter,” where a gathering storm bursts into choruses that see vocalist, guitarist, and drummer all orgasm. As Campbell screams “My heart isnae in this,” you get the sense that he’s lying, though if he’s not his bandmates can still probably carry him with their Snow Patrol chimes (“Shallow”) and drum machine blues (“Blackette”).

Together, each member plugs a big hole in one another’s underachiever lifestyle, just as they potentially do for UK regional indie nuts who’ve been waiting patiently for a fix. Basically, if you’re a Suede fan looking for a way forward in 2011, then factorycraft is your personal lifeline, a snake-hipped mating dance with a guy who’s got a mouth like a Hearts supporter, a mouth that exists purely to confess—jealously, restlessness, rashes, warts, and all. Happy scratching.