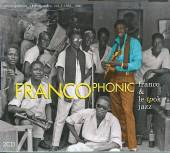 Franco & Le TPOK Jazz wasn’t so much a band as an institution. Led by the eminent François Luambo Makiadi—le Grand Maître, the Sorcerer of the Guitar, the posthumous Commander of the Order of the Leopard of former Zaïre, or simply Franco—the band helped forge the immensely influential Afro-Cuban style once known as African rumba, now called soukous, out of clavé rhythms, the arpeggios and solos of the sebene, and of course Franco’s wicked guitar. The always impressively large band didn’t itself invent the genre, but Franco and co. certainly were its champions. For anyone curious about the history of African popular music, Francophonic is an invaluable resource, distilling Franco & Le TPOK Jazz’s humongous output (by one estimate, the band released many as 150 albums in four decades) into a two volume set. This first installation features 28 carefully selected tracks, a glossy booklet full of photos (including one of a smiling Franco in traditional garb groping a woman’s breast), and a detailed and insightful essay by compiler Ken Braun, mapping the band’s evolution from a scrappy beerhall act into an intercontinental powerhouse.

Franco is legendary for his silvery guitar licks—elongated, harmonious, and sliding. But as Braun writes, he was more than just a great guitarist. In many ways, he embodied the revolutionary transitional age from which he emerged: the years when the Belgian Congo became Zaïre; when the government’s preferred language went from French to Lingala; when the eminent political leader Patrice Lumumba suffered a grisly assassination and Mobutu Sese Seko ascended to power, introducing pro-West policies, platitudes on African “authenticity,” and torture chambers reserved for political prisoners. Over a long and highly successful career in which he ballooned into a 300-pound gourmand, Franco was a folk hero and something of a playboy, a cautious patron of Mobutu who indulged in European fashions and penned songs in French, Spanish, Lingala, and Kintandu, the tribal language of his mother. He had few qualms about setting sophisticated arrangements to endorsements of commercial products (who knew that the 1973 hit “AZDA,” with its sly guitar and six-part harmonies, was actually a one-off advertising a Volkswagen dealership?) or tributes to the Mobutu regime’s policies. But his verses, sung in the mbwakela lyric style, were also known to deliver acidic criticisms masked in allegory. “Liberté,” a romantic African bolero of jangling guitar and piercing horns, is ostensibly about an authoritarian wife, but nobody can ignore the subtext of a line like, “Since you’ve confiscated my passport I’m determined to regain my liberty.” Franco’s patronage seemed to bolster Mobutu’s own popularity, but it ultimately failed to save him from state harassment—he and his bandmates were even thrown in jail once, on the pretext of writing “obscene” songs, after the public got hold of some particularly nasty bootlegs.

The most fascinating aspect of this compilation is Braun’s essay, which examines the importance of each track with lyrical passages and a bit of historical analysis, working as a useful adjunct to the tracks themselves. Disc one shows us the early years of Franco’s career. Opener “Esengo ya mokili” is one of Franco’s first studio takes, recorded in August 1953 with the help of his street urchin friend Dewayon. Throwing down a driving samba, the two of them are already lauding themselves, singing: “Let the priests Dewayon and Franco and the others / sing a rumba.” By 1957, with the singer Vicky Longomba as a de facto frontman, the bandmates are introducing their motto in the comparatively dainty “On entre OK, on sort KO”: One enters O.K., one leaves knocked out, a point they clarify with the sultry guitar, pared down rhythm, and striking vocal harmonies of “Tcha tcha tcha de mi amor.” As the Congo gained its independence in 1960, Le OK Jazz grew to twenty but Longomba dropped out, to be replaced with songwriters-vocalists Mujos Mulamba and Kwamy Munsi, who conjures swing-like razzle-dazzle with “Bolingo ya bougie,” replete with punctuating bass, plucky guitar, and another one of those oblique multi-part vocal harmonies the band is famous for. “Ku Kisantu kikwenda ko” (“I will not go to Kisantu”) is decidedly more cryptic, a take on an old song from Franco’s mother’s village, with a subdued guitar and an opening sketch that perhaps alludes to the witchcraft of a neighboring village.

Disc two takes us through the ’70s, after the tragic death of Franco’s brother Marie-Marie, a short hiatus, and a transformation of the band: Franco added the acronym for “Tout Puissance,” triumphantly dubbing his band Franco & the Almighty O.K. band. (O.K. meant, alternately, Oscar Kashama, his OK Bar, and, as Braun puts it, “Yeah! Everything’s cool.”) At their height, Franco and his bandmates have been known to fill half of an LP with one grooving song, allowing them to develop the transitional soukous style. This they do in “Chèrie Bondowe 2,” with Franco working off a light bass line with shiny ascending guitar licks as the vocalists and musicians come in and out; just past the halfway mark, the band suddenly moves into a hot double-time finish. “Kinsiona” (Kintandu for “Grief”) and “Mambu ma miondo” (“The problem of land”) are meditative and mournful, with haunting vocal harmonies soaked in reverb, respectively reflecting the tragedies of Marie-Marie’s death and the post-colonial wars. Closing on the ten-minute, drum machine-laden oddity “Nalingaka yo yo te” (“I don’t like you”), Braun has shown us the signposts of an oeuvre full of wit, pomp, and sadness, but he notes that there still are ten more years to go before le Grand Maître stops strumming.

Franco must have known he was on to something when he crafted his first guitar out of tin at the age of seven. Now, his kind of languorous phrasings are so omnipresent that they show up in anything from Vampire Weekend to Ugandan dance music made on FL Studio. If you haven’t before heard the African rumba evolve before your ears into the proper soukous, then Francophonic is what you need.