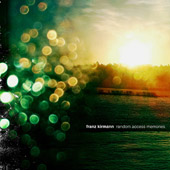 Now here’s something for everyone who likes to combine genres. Frenchman Franz Kirmann began life as a filmmaker, then switched to playing in a new wave band, then went back to films again to work as a semi-professional editor, then set up his own record label. Having bottled and fine-tuned all his experiences, he decided the best way to reach a signature sound was to Howitzer the canvas with ideas and trim wherever he saw white. The results, which first surfaced on his own imprint Lobe Records, weren’t as ghastly as you first might think: Mixmag, IDJ, and real DJ Laurent Garnier all rated him, intrigued that someone had fused post-rock with glitch electronica and still retained their social skills. Three years later and Kirmann’s fused enough to make a whole album, one which he’s cattily named Random Access Memories in honour of those people who skip through records on their iPods. So, without any further ado, let’s jump straight to track five.

“To The Lost Years…” is actually a good starter for RAM, and not just because it’s one of the more orthodox of the eleven compositions. It opens in the same mood as its four predecessors—silky electronics with a slimy gleam—but Kirmann teases a melody out of the protozoa, making the music feel less mechanical and increasingly human. By the time he mixes in the electric guitar, you can see what Laurent Garnier and chums were raving about: Kirmann’s got a knack for deconstructing genres, then layering them carefully onto tight IDM beats—so carefully, in fact, that you don’t notice, your attention drawn by whichever genre you’re comfortable with. He hinted at this power on “De 6 a 7,” where ambience sprouted from a po-faced drum track, but there the main attraction was a strange crunching pattern, softening you up for the main act.

It’s at this point the post-rock camp will be thinking, “But can’t we get something a little less Machiavellian?” Luckily Kirmann’s agenda on RAM isn’t just to smuggle as many guitar tunes as possible into the latest drill sequences—he genuinely wants to excel in both fields, and succeeds several times, at least. The doped out, hazy riff on “L’ennui” feels worthy of its own Western, and should certainly be on the radar of any filmmaker who can’t get a yes from Godspeed. Equally, “Lexi”‘s lo-fi rock, garage production, and hopeful whispering hints that Kirmann’s fan of early Arab Strap, and hints it so strongly that Aidan Moffat should be setting up a meeting with his lawyer. He’ll only get him for one song, though, as Kirmann’s soon seen dabbling with Bollywood soundtracks and acoustic beats on “Tunis,” replacing the intimacy he reached with Scottish anti-folk with lightly twanged sitars. And resistors.

Surprisingly, the record is at its most interesting when sticking to Kirmann’s own hinterland, and not trying to walk a balance beam between his two founding genres. For every goosebump-inducing moment of electronica or squeals that sound like strained rubber, there’s a “Memories/Scars,” where Kirmann’s originality is allowed off the leash and shows us he’s got fresh ideas. A mix of intestinal wheezing and faraway piano, it sounds like something unashamedly extraterrestrial, or something trying to digest an orchestra. Perhaps, given that Kirmann brought so many ideas to the table, results these mixed were inevitable, but its the breakthrough points on Random Access Memories that inch it above its competitors. You hear stuff like “Jimmy Jimereeno,” which is little more than someone rhythmically moving a cocktail shaker, then you try being musical with your own cocktail shaker and realize just how much work’s gone on here. It’s these kind of moments where RAM soars, and these precise tracks you’ll be skipping to in future. I just hope for his sophomore Franz Kirmann spends less time mediating and more time giving license to his strangest ideas. Or, if he is going to mediate, do it between two even more unlikely genres. Opera, maybe, and indie metal.