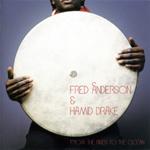 From the River to the Ocean

I spent a lot of time while writing thebe-bop and free jazz issues of Retconning thinking about how jazz has found its way into the music of today. It’s more difficult to think about jazz in the present. The eighties mark some weird black hole of jazz continuity where still-marketable ageing stars lost the plot, the Kenny Gs of the world gained adult-contemporary authority, and where new movements in jazz began to become irrevocably mixed with jam-attitudes (Béla Fleck & the Flecktones) or wrapped into electronica (more explicit during the late nineties in cool [Squarepusher] and non-cool [St. Germain] forms). The initially profound work of electronic/jazz pioneers — like Herbie Hancock on Futureshock (1983) — would have an important affect on hip hop, sure, but the pristine sheen of such music left little room for its development.

But it’s not like jazz has lost its own plot. Culpability extends elsewhere too. I remember when I first moved to Toronto friends already aware of my taste for jazz would note, “you should go to [Bar X]. They have some great jazz there.” In most cases they didn’t, and in most cases people were responding to the lessons four decades of revisionism have taught us: that jazz that sounds the most like traditional be-bop is the best. And that everything in between never happened. This sense of weightlessness in jazz — that it has lost its cache — is due to a combination of things. It is nostalgia for the great albums of the past, a nostalgia itself fabricated by the few jazz imprints that avoided the mid-sixties shift to rock music. Blue Note wants us to listen to their tremendous back catalogue, and also their new catalogue that sounds very much like their back catalogue. And in this contemporary environment of pre-Vietnam urges we therefore must face an artistic-diluting reality: the best way to make money as a jazz musician is to remain faithful to an art form (be-bop and hard bop) that most critics felt had run its course by the mid-sixties. Free jazz? Never happened. Modal jazz? Never happened? Fusion? Never happened. But four dudes playing standards? “Get me a bourbon; I’m staying all night, and my head will bob like this!”

The vibrant jazz scene of Chicago has avoided this conundrum because there are clubs that cater to a wide range of jazz tastes at the same time that veteran artists are embracing new techniques and approaches that they adopt within the confines of jazz (rather than adopting jazz to them). The vital presence of jazz-tinged post-rock outfits like Tortoise also helps, certainly, as does the impressive local jazz legacy. But the big thing is the artists. Most of the leaders of the scene, like Anderson and Drake, have been playing in Chicago since jazz first wondered how to get its pop culture groove back in the early eighties. And most of them are keenly interested both in adapting other styles of music into the rubric of jazz while preserving the basic tonal and rhythmic elements of later be-bop and early free jazz. From the River to the Ocean goes both ways: serpentine grooves that use their forward momentum to feed all sorts of tributary melodies and giant, liquid spaces of free maneuvering. You can sort of see how Coltrane leads to Coltrane (or Coltrane, for that matter) in the passage of the title track or opener “Planet E” at the same time that you can pick out a million embellishments that either Coltrane would never have imagined.

That’s because the nexus of this album exists in the interplay between Anderson and Drake. Anderson’s fluid tenor sax is an endless spate of motifs winding and rewinding each other, always resting against or clipping off the beat. He does sound a lot like John Coltrane (maybe without the angled swagger), but comparisons to Pharaoh Sanders might work too. Drake’s a percussionist who gets that tone and variation is as essential to creating tension as playing fast and hard. His stick work is Blakey-brilliant topped with Bennink accents and Tony Allen embellishments. Hearing the two play off one another on the bluesy “Strut Time” is wonderful: Anderson plays “cool” to the hilt while Drake snarks away beneath him, playing a series of drum lines that are alternately subversive in their giddy cuteness and technically astounding.

The rest of the band has a blast as well. Hearing Jeff Parker play more traditional jazz is a treat; his pre-Tortoise work was mostly in jazz and it shows. His work on “Strut Time” and “Planet E” is like opposite sides of the same coin; on the former he’s loungy chords and bluesy-rhythm, on the latter he’s a series of neurotic stabs. Josh Abrams and Harrison Bankhead move around the back of the stage picking up instruments as they find them. They duet on bass for “Planet E,” Bankhead moves to cello for “Strut Time,” to piano for “For Brother Thompson,” and back to bass again as Abrams picks up the guimbiri for the final two tracks (the last of which is just him accompanying Anderson). But it’s not just the instruments that assure the stylistic diversity of the album; it’s the way each of the five tracks is incredibly different in mood. “Strut Time” and “Planet E” might be the river and ocean but “For Brother Thompson” is a whirlpool, the title track a puddle on a rainy day, and closing meditation “Sakti/Shiva” the calm surface of a lake.

It’s not that I think we should take the water metaphors too seriously; I do think the title of the album might be hinting at the brief history of jazz I mentioned above. The pre-‘60s river had jazz musicians rolling forward together with incredible momentum; the post-‘60s ocean set them adrift to explore their own ideas and mingle with the influence of other genres. From the River to Ocean isn’t about trying to get back to the river; it’s just Drake and Anderson’s way of pointing out that it’s all the same water.