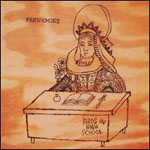 Chris Freeland, founding member of the suddenly litigious Oxes, has offered a surprisingly melodic and personal album -- though still schizophrenic. Birds in High School, his second under the Frenemies moniker, plays with cards held further away from the chest, a rough-around-the-edges style of pop that in places is a stone's throw away from emo. I've heaped dribbling admiration on the likes of Oneida for this same dabbling style of songwriting -- fundamental pop structures and breezy acoustic tones flavored with the odd electronic beat, hand percussion and sporadic noisy outbursts -- and it again endeared me to Frenemies with few listens. But there's something darker at work here. Maybe the record is intentionally less stylish and goofy, maybe even jovial, but there's also something jagged, unrefined and curious to be discovered.

Birds in High School possesses an air of amateurishness, something garage about it that is charming and immediate, such as the way Freeland's voice cracks into a laugh in the final verse of poor man's reggae "Zach's Song," or the drums' cardboard box quality and needlessly loud cymbals. The playful way Freeland stutters "W-w-w-w-w-w-w-w-where did you go? / I was just starting to bloom" is perfect for the carefree, economic electro-pop of excellent single "Everybody Wants a Piece of You." It's the sort of song that is not only fun to listen to, but it also implies that the listener is capable of the same themselves. Last year The Blow's Paper Television made us believe that they could make motivated music for specific people but enjoyable to all. Birds in High School's best moments can motivate all to make enjoyable music. "M's Destiny" builds to a brilliant cascade of melody in its final minute and a half that ascends with strides into cacophony. There's at least one moment like this in every song.

Most of the arrangements and instruments benefit from their low-fi approach, conjuring images of instruments being played, mistakes being made, a tangible, accessible process rather than the cold, clinical studio ether from which many of our favorite albums seemingly spring. However, Freeland's limited vocal range might have been shored up better against the intrinsically melodious pop being played here had they received some degree of doctoring. It may seem naïve of me to point out an unconventional voice when fans of Isaac Brock and Win Butler probably wouldn't take theirs any other way, but it's less a question of convention as it is of personality. Brock and Butler's voices have personality; Freeland's simply doesn't.

I can't help but also note that there's, disturbingly, a puzzling undertone of violence that sometimes, though not often, creeps to the surface. At least twice Freeland makes reference to someone being "beaten in an open field." I could, and might still, take that as the inside joke it sounds like, but for de facto closer "Love Thy Enemy," which begins with the line "I couldn't help myself 'cause she was just so bad / I wanted to use a fist, but a palm was all I had / She's a girl you can't just grab and throw into the wall of the studio / Rip her up and let it go / She never shows her bruises." Yeah, "eesh" is right. And all that over an alarmingly joyful pop music stomp. By song's end, when Freeland says, "You're not afraid / How could you be? / Here with me," it sounds like echoes of battered spouse syndrome. It'd be a pretty serious accusation on my part if I didn't also admit that I don't know if he's being serious, making a bad attempt at facetiousness, or if the song is just an example of when metaphors go bad, but the lyrics are odd and uncomfortable enough to make the song an unfortunate, awkward way to end an otherwise genuinely likeable album.

Ultimately, I'd love to hear a Frenemies album with the same amount of thought given to the lyrics as to the hooks. Freeland is obviously a talented songwriter; he's written a good record, essentially without fundamental flaws but lacking maturity. Now if only maturity were simply a matter of time.