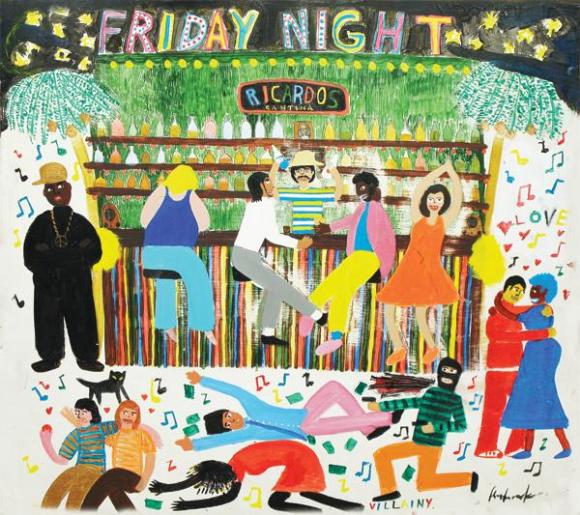 Hip-hop, or more specifically, the hyper-masculine thug archetype perpetuated by Jimmy Iovine and his ilk, facilitates self-parody to an extent: clueless buffoons running about in ridiculous chains, spouting verbal diarrhea that amounts to tremendously insecure self-aggrandizement (hey, DJ Khaled). It’s the prudent approach to just allow the sheer ludicrousness of this minstrelsy to serve as its own comedy; some of this stuff is so poignant it doesn’t require its condemnation or commentary, just a room-temperature IQ and functioning senses.

Attempting to chime in on this toxicity through one’s art is often as inane as the actual music being commented upon; also: it’s self-important and dick-ish. The notion of “conscious” rap is laughable in 2008 because of so many botched attempts to articulate the merits of “real hip-hop.” Little Brother’s The Minstrel Show (2005) fell flat on its face in part due to its ultimate purposelessness. Phonte came out in interviews preceding the album irately bitching about rap’s obsession with materialism and proceeded to put out a marginally boring record about rapping held together loosely by half-funny skits lampooning acts Dave Chappelle had already mocked ten times better. Not that these aren’t legitimate qualms, but its execution was as boring as any Plies record. You can see why it’s hard to take this stuff seriously anymore.

Which brings me to Friday Night—who certainly aren’t taking any offense at their money-loving counterparts’ idiocy, just happy to have some material—composed of Chicago cabbie/rapper Serengeti and his frequent collaborator Hi-Fidel, who eagerly consume thug-isms and the senseless rhetoric of party and bullshit rappers, and, instead of commenting upon them explicitly, don their clothes and crash their shindigs, playing the part of the snide assholes in the corner mocking the rest of the room with facetious quips. As Serengeti deadpans to Hi-Fidel’s inquiry about what he’s about to get into next amidst a night of debauchery: “coke.” There’s a vividness to the characters Geti and Fidel play here, some bizarre cross between the Big Tymers (charisma and winking intact) and Will Ferrell and Chris Kattan in the “What Is Love?” skit, out for a good time, but unconsciously fucking everything up—spilling drinks on themselves, getting a good friend killed, and a slew of other unfortunate coincidences (driven home by their hilariously nervous interactions with various partygoers in a series of skits).

This could be helplessly stupid in less able hands; Geti could drive that coke joke into the ground and Hi-Fidel could sport a diamond-encrusted penis around his neck, but there’s enough restraint here for things to be consistently engaging. It helps that these guys are genuinely talented rappers with an impressive chemistry, Geti’s stumbling, at times borderline autistic flow bouncing off of Hi-Fidel’s emphatic baritone; you can almost hear them giggling at how absurd the other one seems. Which explains why this is so much more interesting than most parodies: it’s actually a fair amount of fun on its own. It’s a party record making fun of parties, really. This is accentuated on the horn-driven “Down On The Corner” where Geti laments, revealing his character’s inner lameness: “Tonight feels like Easter / I need new beaver / I heard you gotta be calm / Can’t be too eager.”

As engaging as all this is, Fidel and Geti really are just playing half-baked faux-gangsters, and this shows through over the course of 66 minutes, especially during a ten minute span of overly obvious punchlines and lazy observations in the latter half of the record. But, defying the trend, the Chicagoans avoid harping on the same stereotypes repetitiously, electing to make asses of themselves rather than sport Roman collars. Ultimately, their self-titled effort succeeds because of this decision to have fun with themselves and their targets in equal measure, draining this satire of its self-importance and allowing the funny to shine like the oversized disco balls at the dive bars they frequent.