10. Spelled In Bones
11. Everyday That We Wake Up It’s A Beautiful Day 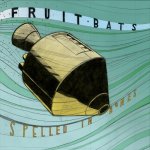 (Ed: David’s been working as a camp counselor this summer and is too busy to write "regular" or "informative" reviews. He’s been playing a lot of records for the kids, though, so let’s sit in and see what they have to say!)

Camper: What’s this?
David: It’s the new Fruit Bats. Do you like it?
Camper: Who are they?
David: They’re this great folk-pop band on Sub Pop.
Camper: Oh.
David: Yeah.

Camper: Wasn’t this in Garden State?
David: Well, not exactly. There are definitely some points of comparison --- the tenor vocals, the image-laden, pseudo-philosophical lyrics, and the medium-fi aesthetic that The Shins used to do, but I get more of a woozy Beulah-plays-Beach Boys vibe out of it.

Camper: Ummm, I guess. But this doesn’t sound like “Good Vibrations.”
David: I’m not talking about the multi-part harmonies. Think about the orchestration the Beach Boys used; they used to be a surf-rock band, remember? The ‘Bats are sort of doing the same thing, just using the guitars to make a nice harmonic bed for the melodies to float over.
Camper: I thought Beulah was a book.
David: No, that’s Beowulf. The Fruit Bats are a little more laid back, anyway. And there’s no horn section.
Camper: Whoa, were those handclaps?
David: Yeah, I like how they slip them in there right at the end. That song’s called “Legs Of Bees.”
Camper: I’m allergic to bees.

David: So, do you like it?
Camper: Is this like, indie-rock or whatever?
David: Pretty much.
Camper: I think that stuff’s pretty pussy.
David: How come?
Camper: It’s not loud or fast enough. Plus all the stuff you play is some guy singing about being shy and lonely, it’s depressing.
David: Not a fan of the spurned lover pose, huh? Let me play you “Lives of Crime” and we’ll see if you change your mind. It’s super-catchy, and just when you think you’ve already had the chorus, they give you another one.

Camper: Hey, if we kill a deer, can we spell our names on the hill with its bones?
David: No, but the title track with all those keyboards and funny instruments is cool, right? Camper: Yeah, but it sounds silly sometimes.
David: I think they’re trying to expand their sound, so I have to give them credit for that, but “TV Waves” and “Traveler’s Song” overdo it a little bit. The songwriting is good enough to stand on its own. Then again, I’m a sucker for stripped-down stuff.
Camper: Why are there two songs about the '70s? These guys must be old.
David: I think they might be making some commentary about that generation’s sense of confusion, cleverly using the framework of the 60s to point it out. Either way, “Born In The '70s” has a sweet “War On War”-style breakdown.

Camper: Dave?
David: Yeah?
Camper: This is great and everything, but can we listen to Green Day now?