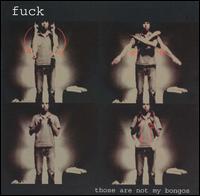 Those Are Not My Bongos

To name your band “Fuck” is no simple task. It requires a dexterity of wit and musicianship that not every Joe Blowhard with a penchant for terse vocabulary can grasp. The term is just so sublimely tongue-in-cheek that using its lazy impact is enough to reduce the actual product—the music—to gimmickry, to nothing more than filler at the whim of a cute social elbowing. Yet, in the sense that Fuck will never be embraced by any mainstream audience during their, or our, lifetimes, the word connotes an alienation that defines much of the maundering Those Are Not My Bongos.

Fuck, a four-piece hailing originally from San Francisco, met in an Oakland jail cell in 1993. Album after album, Fuck have subdued their psych-pop beginnings by working into something of a shoegazing noir-folk. Previous outputs, most notably the debut on Matador, Pardon My French, and Smells Like’s excellent Cupid’s Cactus, have never completely captured the creeping claustrophobia that is seemingly at the heart of Fuck. Bongos is the honing of a band’s mystique. Is this the logical conclusion of an outfit obsessed with the lonelier side of commercialism?

There is no doubt that Fuck succeeds on all accounts in dredging a particular atmosphere from its most recent sixteen songs. There is terrible longing: a tumescent sound bite of a train station cradles a dirgelike strum and the lyrics, “…when it rains here it’s like winter out there / have I missed my stop?/ Have you felt this much?” in “A Conversation.” There is the shudder of a relationship in “How To Say,” a love song that burns from Leonard Cohen’s dry kindling. There is unbearable nostalgia in this record, and it has the power to command the listener’s attention in its least telling moments.

2001’s Cupid’s Cactus belied its soft air with nuances of surprise. It added hints of dance club electronics to lethargy. It used crying babies or even silence to poignant effect. The problem with Bongos’ cogency is that it lacks the idiosyncrasies that lifted Cactus from a predictable mire. Fuck are good at being Fuck, except, by perfecting the dirty, morbid sound of their titular word, Fuck have lost their one grace against the burden of the word. Allowing the rarely layered guitars and soft pianos to watch themselves through to extended conclusions, Fuck trade an engaging hint of longevity for the perfectibility of a milieu.

There are moments like the coolly picked bridge of “No Longer Whistler’s Dream Date” that seem to come from miles away. “Hulk Baby” is boring, a keyboard added to the sparse mix at precisely the point that makes most sense. The album’s closer, “The Sandy Man’s Name is Not ‘Sandy’,” follows an earnestly fingered acoustic guitar up the aquatic wall of sound that drives the slow rhythm of the track, and it feels all too familiar. Much better than the Eels, but ultimately stolen from Damien Jurado’s rucksack. Even the middle of Bongos fails to really excite. The triptych of “A Vow,” “Hideout,” and “Table,” while pleasant and engaging, feels too neurotically placed to break from being much more than a classic call for buoyancy in an otherwise drowning mood.

Such adumbrative irks keep Those Are Not My Bongos from being a truly great release, but Fuck still have the songwriting chops to craft some fantastic pieces. “Vegas” quivers with murky crooning, the warm desert of its namesake echoed in brushed drums and cymbals. “Nowhen, Or ‘Now, Hen’ ” is a dainty pop precursor to the Nike Drake ode, “Good Eavnin’.” “Firing Squad” channels They Might Be Giants through Ween’s most carnivalesque side, and the result is an odd gem.

Yet, such is Fuck. It would come as no shock that a band with such a name would conjure comparisons to such acts as They Might Be Giants or Ween, and the comparisons are definitely there, but, except for the opener “Motherfuckeroos” that dumbly begins with the line, “Does the penis offend you?” Fuck actively avoid wearing their quirks on their sleeves. Instead, they attempt to go farther than irony, redefining the very connotation of their moniker. They sympathize with the stigmatic aspects of “fuck” and create a beautiful tribute to the grey area between their penises and their mouths.

Unfortunately, Fuck’s atmosphere is too meticulous in respect to its somber isolationism to warrant considerable repeat listens. It is as if Timmy Prudhomme and crew are crassly grinning receptionists, opening the door to, as the band’s website so deems it, fuck world headquarters. “THIS,” they whisper in unison, “is FUCK.”