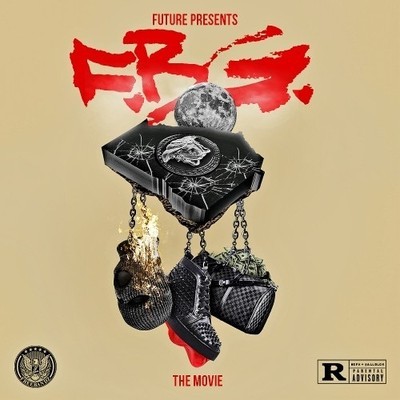 Future doesn’t really rap, and he doesn’t really sing. He bawls, intones, caterwauls, and sometimes burbles; he breathes fire and spits the kind of smoke that chokes and does not rise. He is, yes, as inseparable from his ubiquitous phase vocoder as Bane from his breathing mask, but commands the same furious force without the aid of those overstrained eyes. (One imagines Future’s as somehow eerily clear and totally faded at the same time.) Maybe it’s the combination of these unwieldy ways of shaping words and the androidal sterility of the Auto-tune, or maybe it’s just something in the Sprite: either way, trying to make sense of his style is like trying to cage a wild animal. Rob Harvilla has suggested in an excellent Village Voice piece that we can put Future in a dynasty of savage vocal pioneers like Tom Waits, and in this respect that suggestion makes a good deal of sense. The appeal of Future’s style is precisely in its ugliness and disregard for just about every known convention of vocal technique. What Tom Waits did for the blues, Future does for the post-Flocka trap scene: wrecks and rebuilds.

Last year’s Pluto, which CMG’s Colin McGowan held up as the best album of 2012 with what I am increasingly coming to see was good reason, was a sprawling (and borderline insane) voyage through the uncanny tricks in Future’s reserve. But it was also an emotional powerhouse: once you got past the initially overwhelming slobbering-bulldog-after-a-long-day-at-home-alone enthusiasm, a track like “Turn on the Lights” revealed itself to be a straightforward and startlingly affecting ballad of a dude looking for the girl he was meant to be with. Indeed, despite the frequent violence of his style and the high-quality bluster of his production, Future Hendrix is really a big softie when you dig into his verses. On one song from Pluto, the aptly titled “You Deserve It,” he shouts with glee about his little cousin calling him from school to congratulate Future on his success; on another, he sums up the spell of attraction with poetic concision: “I took a sip of your tea and I ain’t been right ever since / As I think to myself / ‘Could it be?’ / ‘Is it heaven-sent?’” The introduction of such unalloyed sentimentality lends an affective dimension to Future’s chaotic bluster that sets his music apart from just about anyone else I can think of.

On F.B.G: The Movie, Future’s first release since Pluto was upgraded (via an extra dose of Drake and Diddy) to Pluto 3D late last year, isn’t as consistent or as deep as that record, but as a case study in caging a wild animal it’s pretty damn fascinating. Future’s unofficial status as the new king of Atlanta comes with certain trappings, and you can check them off here like like clicks of the Rolex: the guest verses from Weezy and Wale (and, uh, Sisqo); the rags to riches talk (he uses these actual words, a lot); the introduction of the Freebandz, his own personal mini-collective a la Young Money or Dipset. None of this really works out, at least not the way it’s supposed to. The we-made-it talk is de riguer, if not unconvincing, and was more interestingly expressed on “Jealous” and “You Deserve It.” The FreeBand Gang can be a bit exciting—Casino, in particular, has a compelling Rick Ross-ian flow that works well as a counterpart to Future’s more restrained moods—but never commanding enough that you want them to take center stage. Weezy just sounds like a fucking corpse.

All this window dressing has the undeniable, if unintended, effect of refocusing the listener’s attention on Future himself on every track. Fortunately, he’s as magnetic as ever. If God gave his voice to one of those streetcorner prophets on the day before the apocalypse, I imagine his cadence would resemble those atonal upswings on the terrifying “Mark McGwire”; if Satan responded, it would probably be to the tune of “Karate Chop.” Future has a way, on tracks like these, of drawing an incredible amount of expressive power from the bare, often song-length repetition of one arresting vocal pattern. What should be monotonous and grating enthralls more each time. And tracks like “Keep On Shinin’” show that this particular trick, with just the slightest variation (a syllable or two withdrawn from verse to verse), works as well from a subtler point of attack. I don’t know if it really makes sense to talk about new uses of repetition in a genre built from it, but Future ought to be prominent in that discussion if it does.

So he’s his own star; a one-day permanent scar. It would still be wrong not to mention some of his more frequent and successful collaborators. First and most notably, there’s Mike WiLL Made It, the Atlanta prodigy who started out producing for Gucci Mane and last year was responsible for “Bandz A Make Her Dance” and (some part of) “Mercy.” WiLL’s off-kilter, submarine, weirdly pretty approach to trap is a perfect match for Future, especially in lovesick-sap mode. Unsurprisingly, his two tracks here attract the highest-profile collaborators (with apologies to Sisqo): Weezy and Drake on “Bitches Love Me,” and Drake again on first single “Fo Real.” Which: I do my best to talk maximal shit about Drizzy, but he does serve as a bizarrely effective foil to Future’s when they get together. Drake the essence of smooth, all charisma and poise, and Future a conjurer of some filthy primordial chaos—two sing-rappers could not be much different, but Future draws Drake far enough into his own orbit that they almost seem to be speaking the same language. But the center of gravity, on each occasion, is wholly unmistakable.