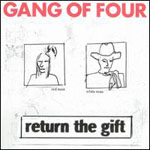 Gang of Four: Return the Gift 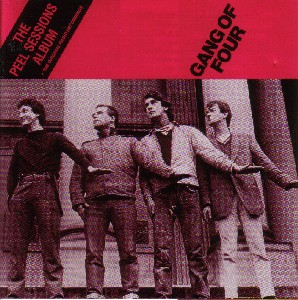 Gang of Four gives listeners all they can handle: bells, whistles (well, melodicas), and a serious philosophical dilatation.

While most of us are familiar with them as exemplary, politicized post-punk practitioners, there was a method to their manifesto. These smart, pissed-off university students took the bludgeoning, adolescent appeal of the Sex Pistols and filtered it through a cracked, collegiate lens. The Pistols pounded out updated Chuck Berry riffs and spat lyrical messages of anarchy as the ultimate end-all in rock ‘n’ roll. The socially aware Gang of Four, however, took this approach to a different level, inventing the funky, jagged agit-pop songs that music buffs salivate over, songs with a similarly sarcastic but overall more cerebral appeal. While the I-wanna-be-anarchy-get-pissed-destroy Sex Pistols preached destruction and exulted nihilism for its own sake, Gang of Four illustrated why it all felt so goodbecause you feel empty and shitty all the time, you idiots! You’re constantly barraged with the promise of a better life through the endless purchases you make in a marketplace of goods you don’t really need! Yeah, we know you’re horny, lonely, and unfulfilled, but a new miniskirt, waffle iron or drunken blowjob isn’t really gonna give you that purpose in life that you so desperately claw for each day! These aren’t so much songs as they are war chants of sociological epiphany, and their messages get lodged in your brain from sheer repetition: “Repackaged sex keeps your interest!” Say it loud, and say it proud! “The body is good business!” These rhetorical gems were a blast of fresh air, at least for a while, and they established a solid theoretical foundation explaining punk rock’s constant quest for freedom. Gang of Four managed to retain some of the best stylistic elements of punk—urgency and primal rhythms—and seamlessly blend them with a more sophisticated message.

Gang of Four’s intelligent, dissident music was intended to reach kids of all ages with capitalist critiques and spirited indictments of a vengeful and sadistic society. And what better way to indoctrinate the listening public than with swinging grooves and aggressive guitars? So while a glut of “college rock” may have gathered in their wake, college rock this is not. In fact, drummer Hugo Burnham abandoned the leftist theater troupe he founded at Leeds “because he was already preaching to the converted”—meaning other left-leaning college students. The jaded university kids may make up most of the band’s audience, but Gang of Four knew that for real paradigms to shift they would have to appeal to a broader segment of society. EMI Records knew punk’s musical fury and radical messages were hot property. They figured on this marketing angle, and thus was hatched Entertainment!.

It’s little wonder the 1979 debut is critically revered as a grand statement of musical evolution and post-punk idealism. Much has been said over time about Entertainment’s greatness and influence, and we won’t bother repeating any of it now. What often gets forgotten or ignored, however, is the band’s real powerhouse package, The Peel Sessions Album (compiled and released 1990), a record so good it actually manages to make the searing Entertainment! sound flat and too carefully considered in comparison. Made up of three separate BBC Radio performances between 1979 and 1981, these sessions not only capture a fantastic live band perfectly at ease with melody and feedback, but they also prove that GO4 could really swing with a frenzied energy that leaves Entertainment’s performances in the dust. The band’s signature sound, their controlled fury and perfectly executed nervous energy, are displayed more effectively here than on any of their other records. The Peel Sessions prove their strength as soon as you drop the needle on track one, “I Found That Essence Rare.” It’s in-your-face and demanding, faster, looser and far more exciting than Entertainment’s comparatively understated counterpart. The up-front guitars are louder and more dynamic, and the rhythms are downright hip-shaking, conjuring up Gang of Four as a jagged, cantankerous perversion of white-boy boogie rock.

Bringing their material to state-of-the-art technicians in the BBC studios was a wise move. The opportunity to broadcast their urgent musical and lyrical message to the radio masses found Gang of Four in full bloom. They’re so confident-sounding and on top of the material that it’s scary. With the stealth of cougars and the skill of conductors, they build tension across taut verses, lying in wait for the perfect moment, and then they release huge, scorching choruses, firmly nailing each nuanced twist and turn. As the band gleefully tears through “At Home He’s a Tourist,” “Natural’s Not in It,” and an especially earnest rendition of “Return the Gift,” they forever sound like a gas can above a bonfire, growing hotter by the second. The rhythm section shuffles along, gaining momentum, while Andy Gill fills any empty airspace with his expressionistic staccato guitar stabbing. Then it’s full-on musical release. Even Jon King’s lead vocals teem with an uninhibited vitriol when held next to the breathy and self-aware delivery on Entertainment! The fervent lyrical eloquence of songs like “Natural’s Not in It” is especially ingenious when you consider the bigger picture: a singer rails against the appraisal of sex as our society’s ultimate goal-and-reward structure while the band simultaneously energizes the listeners with an undeniable, butt-shaking backbeat and slaughters them with mean, cutting guitars. It’s a brilliant all-around commentary on our pathological love/hate relationship with sex, and it’s delivered in the context of a formidably efficient and skewed pop song.

These days, college rock has come and gone, and it has given way to grunge (Kurt Cobain cited Gang of Four as a big influence) and ‘90s indie rock. Our current musical landscape finds angular new-wave and post-punk back in vogue, and Gang of Four has garnered renewed public interest. As a result, our latter-day critics say Entertainment! should be a touchstone in any self-respecting music fan’s collection. This attention, of course, seems largely due to bands like the derivative Franz Ferdinand, whose influences are impossible to ignore. They gloss over GO4’s more difficult musical tendencies and anti-fashion, anti-capital sensibilities, sanitize the picked-over corpse, and spoon-feed bits of it to the attention-deficient public in the form of vapid, commercialized (literally—“Take Me Out” was used in a PSP ad) ditties. That Franz Ferdinand finds mainstream success in a sound that shamelessly bowdlerizes its much stronger and more salient source material is, unfortunately, the way of the world. Ease of consumption always trumps risk, challenge and originality—Gang of Four realized this too, and it eventually overcame them, at least musically. Sadder still, yet predictably enough, Rhino finally decided in 2005 to give a proper, permanent American reissue to then-26-year-old Entertainment! while allowing The Peel Sessions Album to continue to languish in out-of-print obscurity, where it remains to this day. Unfortunate, too, because if all of us had these sessions ahead of Entertainment! on our iPods, Franz Ferdinand’s pallid little discs would be littering dollar-bins ‘round the world.