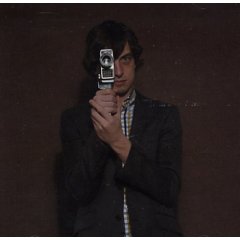 Bass, drums, geetar. This is the basic, familiar template of a record that does nothing but be basic and extremely, gratifyingly familiar. There’s no one to ask what’s wrong: all instruments lost in wonder and disillusionment, blasting chord-shapes and suffering voices like all kinds of barbed wire high-jinks, smoldering punks, day and night. Not to say that the band is hardly listening—Gentleman Jesse is certainly the best-recorded of this year’s crop of lo-fi revisionists, disarmingly bright to the extent that it stands more or less separate, a comfortable stone-steady beacon from which we can hitch easy lines to the underground but nothing so strong as to shake what is effectively establishment.

This is the type of record that either stands or falls hard on a promise of good, old-fashioned rock; the kind of retro-avant shit that got discorporated and promptly forgotten a couple of years back but right now stands for some big next-level push. That push being backwards, and depending on your point of view, upwards also. This is regurge-rock forcing its way back to the head, grid-fried and comfortably spazzed: loose and firing in vomitones, as nature intended. It’s also a really solid, persuasively calculated set of brash, cherrycoking pop songs. All’s missing is the tsk-tsk of pick-ups flubbing, people blowing out some less-than-zero noses.

So far, so fun. Still, do yourself a favour and try to get a physical copy of this. The vinyl rips floating around are hazy and do dull, pretty much, the third, big-notion Reason why we’re reviewing this and not a lot of the other genre-enlivening jangle-bop that’s been making its way out of the basement; that is: the cheery, downright fantastic production job. Here, fashionable murk is eschewed for genial and lighthearted lucidity: guitars really hit crisp, balder-like and complementing some on-point bass’n’drum work as solos shift positional into the obvious nooks. It’s all obvious, for sure. Still, that obviousness does nothing but highlight the exceptional construction of some of these songs: the way “Wrong Time” works its metric, or how “Butterfingers” bellhops a register into a final, fist-pumping chorus. Neither an amusing travelogue or weird ceremony of style, the band crashes this sound like a body politic, or a birth-right. It’s all very carefully authentic.

And all through this, Gentleman Jesse pulls you in on the amusing facts: home is a “black hole,” he’s “ready for the curtains.” He’s gun sleep away the rest of his days. And, um, if he can hear you, “you’re t-talking too loud.” Love’s, of course, always the snag. His heart songs are his rhythm strips. Everything else, meanwhile, peels down to Nick Lowe and the oft-mentioned Exploding Hearts. Jesse channels Lowe’s smallprint, with an eye on the breakout affability that made Guitar Romantic (2003) this decade’s cheeriest debut. The result is something at once measured and casual: the verses of “Attention” skipping over gutters, its chorus just very smartass in its call-and-response jive. “All I Need Tonight (Is You)” is straight pep. “Put Your Hands Together” improbably coalesces like so much shock red on wallpaper, as Jesse carouses for the rafters.

The depth of it all must frighten him. Taken forcibly, his band’s self-titled is perhaps this year’s most rigorous and unassuming statement of self-definition slash effacement, take your pick. The range over which it moves is functionally non-existent; for once, we can cop to artfulness and just call this thing refreshingly musical. like a rising balloon of blazing riffs and low moods, Jesse is nothing but fun, endearing company. It’s a record that doesn’t ask much (of itself) and so, by its close, almost seems to come off as painfully egregious with its hooks. Haters will call it workmanlike, which is fine. This is hard work. Hard work will get you places, fuckers.