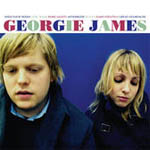 There’s such a difference between the pop-light of Georgie James and John Davis’ last band, Q and Not U, that when Demos at Dance Place opens with “I thought I saw you / right where we were walking / back in my evil days,” it’s hard to predict if it’s the “you” of pop convention or the “evil days” we’re more likely to fixate on. More confusing still is what comes next: “I don’t miss my evil days”; a sentiment that, if referring to those spent with the seminal D.C. Dischord band, may lead Q fans to cast too harsh a look at what is, essentially, a nice little demo of likeable, if uneven, pop songs.

After the dissolution of Q and Not U, Davis teamed up with fellow D.C’er Laura Burhenn, whose solo projects the band’s Myspace describes as, “Beth Gibbons meets Leonard Cohen and they share a drink at the piano with Nina Simone,” to write pleasant ‘70s pop music. Though the aspect of Georgie James’ music likely to receive the most attention is the extent to which this description contrasts with Davis’ spazzy former outfit, Demos at Dance Place possesses something fundamental enough justify any individual attention the band receives. At seven songs, Demos offers enough, and with enough confidence, to cast their impending full-length in a promising light.

Though “Need Your Needs” opens Demos with the aforementioned lines, it’s really “More Lights” that will establish that the band has a songwriting drive of their own. Davis and Burhenn hot potato an infectious melody on alternating verses over Rhodes piano and acoustic strums. It’s a simple, summery mix, unimportant in a way that is both nonsensical and central to the song’s appeal. “Cheap Champagne” closes out the EP in a similar vein, begging us not to look too closely at what is being said in favor of the verses’ enjoyable two-chord momentum, and that impetus anchors the song, and most of Demos to the listener’s lobes.

Davis’ drumming is still rock-solid and full of gorgeous tones, even if the style of music here demands less the octopus-armed drumming of a “Soft Pyramids” than the straight up funk-pop of “Need Your Needs.” Davis’ bass and guitar work is similarly solid, serviceable and catchy where it needs to be, though never straying too far from the beaten path of Demos' pop formula. At the same time, “Aftermath” is almost entirely a Burhenn effort, a brand of McCartney piano pop that nicely breaks up the EP with an extended piano/vocal intro that turns out to be the song’s primary melody.

Really, that a demo is this clean sounding is sure to once again distance curious Q and Not U fans, but that Georgie James sound this professional takes positives steps towards distinguishing the songwriting and style of the Davis-Burhenn combo. Where Chris Richards, Davis’ former band mate, went internal, acoustic and unfamiliar with this year’s Purple Blaze (under the moniker Ris Paul Ric), Davis and Burhenn have decided to set out on more recognizable roads, the signposts for which are the favorite pop records of recent decades. It’s a more instantly gratifying approach, surely for both artist and listener, musician and music appreciator.