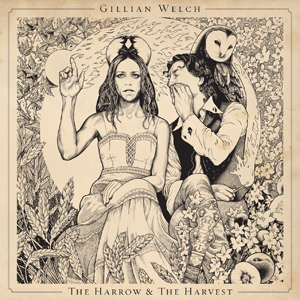 The Harrow and the Harvest

What does eight years represent if not an overdue anniversary to stop counting, to cease peering longingly into the horizon and ‘fess up to whatever you’d hoped to see? That near decade separating Gillian Welch’s Soul Journey (2003) from any studio follow-up had rusted over with indifference; once overzealous fans like myself became complacent while the songwriting duo of Welch and David Rawlings considered calling it a day. The days of anticipating a new record with bated breath were well expired.

So credit the raw potency of The Harrow and The Harvest not only for rebuilding Welch’s estranged congregation, but also for convincing fans and press-folk alike to begin counting backwards. Much like recovered addicts piecing together the years in which they gradually derailed, listeners have become smitten with an origin tale that stretches back over those lost, seemingly uneventful years. And even if the grounds for apathy change from interview to interview—with Welch and Rawlings citing songwriting slumps, the three years spent building their own studio, or their habit of crisscrossing the USA by car—it’s the duo’s diligent quality control that shines throughout The Harrow and the Harvest like a proud badge.

Here’s a record tragic enough to warrant a renaissance of Welch’s aging cult status and elusive enough to justify fans romanticizing the death-slow creative process that kept Welch in the shadows for so long. The weary-eyed chorus of “Tennessee” has the anthemic touch of fellow alt-country collaborator Ryan Adams’ “Oh My Sweet Carolina,” only inverted as though any history buried in the soil is cursed, not glory-bound. A trio of disconnected ballads echoes a similar small-town plight, with “The Way It Will Be,” “The Way It Goes,” and “The Way The Whole Thing Ends” each finding new ways of articulating the poverty and tough love of a fated melodrama. Sometimes Welch and Rawlings seem content telling the tale as opposed to selling it—as on “That’s the Way the Whole Thing Ends,” where a drowsy guitar oscillates their rootsy nursery rhyme ad nauseum—but repeated listens reveal the grit and mournful harmonies scattered over the track’s emaciated skeleton. This is bone-dry Americana, for sure; the kind that casual listeners will label “too country-ish” and coffee houses won’t touch. This is music for taking swigs of whiskey off the dash of your car; “Tennessee” states as much explicitly.

Be warned: there’s just as much poison in The Harrow and the Harvest‘s sparseness as there is hard-fought contentment. And, more often than not, these two conflicting moods—the dour and the tender—form a cocoon-like veil over the listener, depressing and comforting them all at once. The likes of “Dark Turn of Mind” and “Down Along the Dixie Line” deal mostly in resignation, looking halfway back on a past one can’t change and a future seemingly stuck in stone. Matched to the record’s looming sense of economy, which renders each vocal coo and banjo pluck precious and fleeting, Welch and Rawlings draw us defenseless into The Harrow and the Harvest‘s long plateau. Its overcast may be thick like a dustbowl, but well-placed rays of light make this record an especially accomplished return.