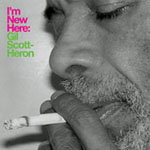 The idea of Gil Scott-Heron as some “godfather of rap” or revolutionary street poet and singer is, in 2010, perhaps never so strongly understood as the simple fact that he’s the guy who told you that the revolution will not be televised or a sample credit in Common’s liner notes. Especially as time went on, a certain type of Scott-Heron song—the disco-influenced PSA, heavy handed stabs at relevance forecasting some of the preachier aspects of the backpacker crowd—made a large scale revival of his iconism not seem very appealing.

But as for how Scott-Heron sees himself in 2010: he’s new here. It’s been over a decade and a half since his last album, nearly three since he was consistently doing much of anything. And of this he is painfully aware; probably the single best thing about I’m New Here is how Scott-Heron doesn’t argue at all for his legacy as anything worth dwelling upon or dissecting. “I had an ego on me the size of Texas / But I’m new here, and I forget / Does that mean big or small?”: the line withdraws slowly from Kanye-brand meta-egoism towards something more soulful and inconclusive, settling into a tiredly conversational mystique. It’s all free-floating ambivalence, the recognition of the emptiness of self- and popular regard and then replacing that with an outwardly searching, curious attitude rooted in the accrued perspective of age.

As much as this sort of rumination works over spare guitar lines, Scott-Heron doesn’t spend much time with any instrumental idea; each song of the twenty-eight minute album is like a brief snapshot of what could’ve been a themed record in and of itself, as if Scott-Heron’s attempting to cover a lot of ground, re-introducing himself to the listener in oneiric notions instead of with a hardlined retrospective of the last twenty years. Scattered throughout are soundbites of wisdom in nearly contextless skits, fuzzy and tossed-off enough to come off as excerpts from an interview or overheard conversation; some are even manipulated electronically, but with a subtle touch that mirrors the kōans he drops.

Elsewhere there’s the ubiquitously bluesy “I’ll Take Care of You,” where strings and piano backup, straight out of a Lee Fields demo, linger over atypically, ambiguously romantic lyrics, suspend above unhurried chords and the steady pulse of a bass drum. More characteristically, check the darker, ambient “Where Did The Night Go” or “The Crutch,” almost but thankfully never quite reaching the threshold of dubstep as Scott-Heron’s deeply felt yet unresolved slice-of-life vignettes develop, to sense how sternly Scott-Heron feels unresolved with his life as he nears its twilight. Staying up all night trying to write a letter; lonely yet self-composed city life; observations of someone who’s grown old while somehow refusing to get comfortable in an ideology or a false sense of artistic security: with these broad conceits he toils.

And, still, it’s an assured effort he churns out: Scott-Heron’s age-thickened voice and simple lyrics, stripped of the didacticisms of early, well-known songs like “Angel Dust” or “The Bottle,” are more charismatic than ever. His new turn towards humility and away from the production that once characterized him makes his voice all the more immediate; instead of bemoaning the ghetto’s reliance on the bottle, he speaks with a voice gone raspy from alcohol. But as he says on “I’ve Been Me,” “If I hadn’t been as eccentric, as obnoxious, as arrogant, as aggressive, as introspective, as selfish, I wouldn’t be me, I wouldn’t be who I am.” By demystifying his legacy he gives it girth.

Cannily, the album is bookended by two parts of “On Coming From A Broken Home,” both backed by samples of Kanye West’s “Flashing Lights,” both of which give perspective to his gadfly preacher persona with a more focused, personal perspective. And the fact that he gets back at Kanye, sampler extraordinaire, who has sampled Scott-Heron on a number of occasions—it’s a plain-faced, brilliant move that encapsulates all the wit, humility, and wizened forward-thinking that makes this such a striking album.

And it may just be his best record. I’m New Here manages to pack a lifetime’s worth of artistic growth in one completely unobtrusive half-hour. Even though he ditches everything that anyone thought they liked about him in the first place—scolding, prescriptive poems over elemental funk (although the inverted-Beck of “New York Is Killing Me” and the synths of “Me and the Devil” work nearly as well)—he ends up distilling a far more compelling essence of the artist that influenced so many by still schooling those he influenced as good-naturedly as he references them. Forget the American Recordings and “Hurt,” at the very least this is the gold standard for a comeback.