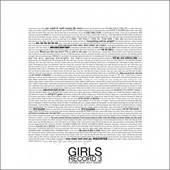 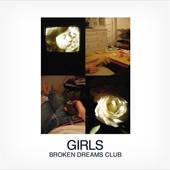 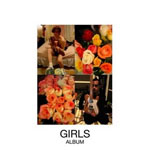 As much as I hate to begin another Girls review the exact same way, their name is still rich territory were one to ever feel compelled to accuse bands of false advertising. The San Francisco-based duo, despite featuring girls on the covers of their records and in their press photos, is most definitely two men: Christopher Owens and Chet White. Their songs are certainly in love, or trying to be in love, but more with music and the west coast than with actual girls. On Album, their debut, Owens and White are bigger on Big Star-styled power-pop, Jonathan Richman’s supposed innocence, and relentless optimism—the idea that pop music can still change at least its creators’ lives.

Album‘s songs are strikingly welcoming, full of endearingly narcotized sunshine and pop tributes. In fact, this could be the single most accessible thing to have ever been inspired by Spiritualized’s bliss-outs, which appear in condensed form all over. “Laura,” otherwise a relatively concise bit of pop built on a bass line mixed so loudly that it practically steals the listener’s attention from Owens’ soaring, snarling vocals, gives way to a two-minute coda of layered vocal harmonies and dense guitars, and the song is better for it. “Summertime”‘s optimistic melody explodes into three minutes of drawn-out guitar chords atop an unbelievably cheesy synth line, yet there’s something almost irresistible about it. “Big Bad Mean Motherfucker” plays out like a harsher version of Yo La Tengo’s cover of “Little Honda,” drugging the hell out of a Brian Wilson-derived song structure. There’s still cars, but getting high and getting laid are clearly much more important than shifting gears or actually driving the thing somewhere. Despite the fact that these are songs willing to give themselves almost totally to freakouts, Girls’ pop sensibility almost always comes out on top, and the songs never get eaten by moments of indulgence.

If anything best indicates the variety within the band’s fairly consistent songwriting and arranging (take studied melancholy, add sunshine, downers), it’s their singles. “Lust For Life,” built on a trebly guitar progression, gets immediately into the pining (in this case, for “a pizza and a bottle of wine” and “a brand new start in love”), then the tambourine comes in and everything comes conveniently to a close. “Hellhole Ratrace,” on the other hand, runs nearly seven and takes forever to establish itself beyond a start-stop acoustic guitar and hand-percussion arrangement. With every repetition its chorus gets bigger, pushing harder and harder towards the anthemic; the first repeat allows an electric guitar and harmonies to break through, the next is consumed by feedback and stronger versions of those harmonies, turning it into the most overt and most successful of the band’s Spiritualized homages. Unlike much of Album, however, these are songs almost exclusively of longing, “Hellhole” works more than partially because Owens’ frustration—or his attempt at solution—gets to hijack the song almost totally, stealing it from the sad-sack narrator’s relentlessness. There’s really nothing immediately salable about it.

When the record isn’t busy poking at Jason Pierce, it’s instead taken with classic American pop songwriting. “Ghost Mouth” quotes the “Be My Baby” fill like a dozen songs before it and on “Lauren Marie” Owens goes into full-on worship, as he mentions how he “chased his broken dreams” and admits that “even broken dreams can still come true” before stalkerdom wins out in its chorus. Closer “Darling” is all about how Owens “found a friend in a song,” and its infectious optimism comes through in country-tinged guitar work and another bass line mixed practically across from the lead guitar in volume and panning.

Despite the fact that there’s little save for its significantly cleaner production that immediately differentiates Album from the slew of stoned, sun-dazed pop coming from California this year, there’s something really quite wonderful about it. In the face of a whole lot of tunelessness, Girls shoot for often excellent melodies and treat them just strangely enough to keep them interesting. Whereas Owens’ Holy Shit bandmate Ariel Pink buries his tunes beneath layers and layers of deliberate ugliness, with White the duo’s songs are sprawling and sometimes strange, stopping their prettiness from becoming a distraction or a contrivance. Despite having ties to shitgaze, this isn’t a record obsessed with that aesthetic, and this works to its advantage, since these songs clearly aspire to be bigger than that and have very real potential to be.