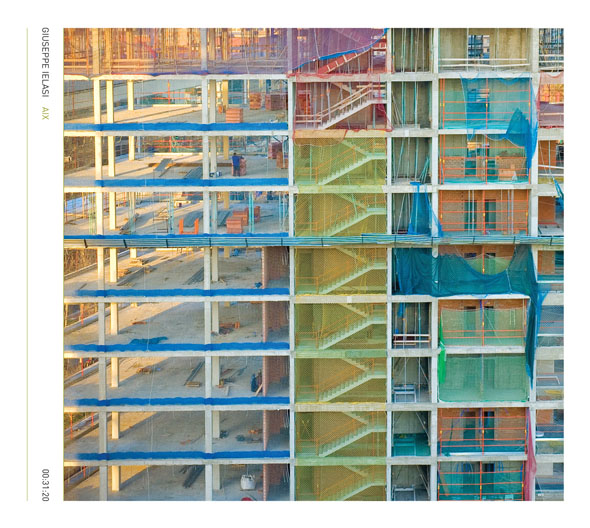 It was easy to see how Giuseppe Ielasi fit into the standard for the 12k label with his 2007 release August, a beautiful but unsurprising ambient album full of long drones nestled with acoustic instrumentation. Aix hardly seems like the work of the same artist, or at the very least, sounds like he took some of the same acoustic samples and put them to completely different ends. In fact if August demands rote descriptions, it’s hard to know exactly how to summarize this toothpick construction: AMM with a downtempo beat? Burial with 90% of the music submerged iceberg-style?

While you’d easily expect an ambient artist wanting to insert more of a rhythmic basis in his music to veer towards techno, Aix almost feels like it could break into a free jazz jam at any point. The fact that it doesn’t points to a weird paradox of the album, that it somehow is both left-field funk and strict musique concrete at the same time—as linear and composed as the geometric composition on the cover but full of unexpected rhythms and even virtuosity in small doses. The second track (they’re all untitled, which only adds to the strangeness of the whole thing) consists mostly of what sounds like a prepared piano playing at the low and high ends, reverbed percussion, an aerosol can, and a zipper. On paper it sounds like an absurd high concept Fluxus/Matmos experiment and yet in practice it’s actually a smooth slab of acid jazz. Likewise, the opener is mostly just a single chord on an organ backed by the kind of wind-up toy percussion Autechre pioneered—but that chord, cut up just when it seems like it’s developing into a riff and smeared all over the track, feels like the faint imprint of funk.

And if Ielasi did retain some of that haunting ambience from his days as a Fennesz disciple, it’s employed here not in some obvious minor-key way or with semi-masochistic asceticism but in a kind of Mission: Impossible sense. Track 6 is almost all flakes of industrial samples and rumbling static that sound surprisingly brisk and light rather than heavy. Track 3 is a buoyant mix of mouth harp and hand percussion, more physically oriented than the vast majority of electronic music, but still sounding like it’s scoring a stealthy jaunt through air vents and clean hallways.

Of course, making music that only hints at action rather than actually embodying it isn’t always that satisfying but Ielasi finally hints at darker undertones on the final track, where mellotron drones and slippery bass are augmented by the sudden aggressive plucking of strings; this is a rare instance on Aix where he completely inhabits the instruments he samples. Sudden radical paradigm shifts don’t usually succeed right off the bat, though; at least Ielasi’s already halfway there.