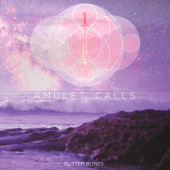 How To Dress Well’s Love Remains (2010) proved it possible to convincingly establish a sense of place for a listener with nothing more than a few heavily distorted “oohs” and “ahhs” layered atop one another, but one never got the sense that atmosphere was that record’s end so much as its means to hold everything together. Conversely, Amulet Calls, the surprisingly accomplished (and freely downloadable) EP from the blogosphere’s latest witch-house upstarts Glitter Bones, is content to simply set the mood and bow out there.

This suits them just fine: the shimmering, utterly of-the-moment surfaces this EP trades in are supremely appealing, if ultimately shallow. So what if it’s more or less just an immaculately presented collection of contemporary poses, a neatly packaged amalgam of trending stylistic ephemera? This is a snapshot of the zeitgeist (or zeitgeists), chillwave and drag and whatever will get popular next summer included; there’s nothing inherently wrong with that. I probably won’t remember what this sounds like in a year but it sounds pretty good right now, and I’m content with that.

You could call them “post-Salem” or “post-Washed Out,” if you absolutely must—except “post-” doesn’t exactly work because this is all, for better or worse, completely right now. “Ceremonial Secrets,” the strongest and most fundamentally pop-oriented song on this EP, could accurately be described as a combination of chillwave and witch-house, which I realize sounds like the most irritating thing ever but is actually pretty great. That the two most discussed (and casually derided) microgenres of the last two years would eventually converge was inevitable. That the convergence would result in a well-rounded, infectious pop song was decidedly not so inevitable—here Glitter Bones deserve some credit for not only daring to do it but for managing to successfully pull it off.

They’ve got the, um, chill-drag aesthetic, and by extension atmosphere, down to what seems like a science: gleaming synths, half-broken drum machine, Houston vibe, everything slinky and slow and largely unintelligible. It’s an appealing mood they set; they don’t do a whole lot with it, and nothing else here lives up to “Ceremonial Secrets,” but it sounds nice enough. Again, one can’t exactly expect this stuff to endure through the ages, but as fleeting pop fluff goes—this is straight-up contemporary confection—you could do a lot worse.