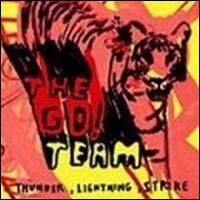 As I write this, I find myself periodically drifting from my computer screen to my television, glued to CNN, equally beguiled and appalled by the war on civilized discourse America has waged over the course of this election campaign. Talking heads from all geographical and political quarters weigh in on possible outcomes: a narrow Bush victory, a narrow Kerry victory, overwhelming legal challenges from both parties, mass protests, terrorist attacks, insurrection, revolution, civil war. Even as a Canadian, the culture of fear is all but unavoidable: our time seems to carry a looming sense of severity.

And indeed, a cursory overview of the most celebrated bands of the early 21st century is as indicative of the cultural climate as any Gallup poll or political documentary: Wilco, Interpol, Radiohead, and even The Strokes each, in their own way, carry and even celebrate the burden of post-millennial panic. While all four bands work from distinctive sonic templates, their emotional distance and subtle touches of dread all pin them directly to their era.

So perhaps it is the utter lack of this dread that makes Thunder, Lightning, Strike, the debut of England’s Go! Team, all the more exciting. Sounding something like The Avalanches reborn as a garage band, the sextet subverts both rock and dance formulas into largely instrumental music that, in the best sense, sounds like everything and nothing you’ve heard before. While there’s nothing overtly innovative about the record, its crucial gift is the obvious and palpable sense of delight that went into making it; this is music that is joyous but not phoney, creative but not not self-conscious, celebratory but not hedonistic. For those lucky enough to hear it, it will be one of the highlights of 2004.

It opens with “Panther Dash,” mixing choppy guitar chords and furious Soft Bulletin-style drumming with a brilliant and altogether unexpected harmonica hook. Elsewhere, on “The Power is On,” judiciously-used schoolyard chants are set to thundering drum loops to create what sounds like a game of jump-rope in hell. Other highlights include “Bottle Rocket,” complete with sampled brass and a completely incomprehensible rap, and the absolutely stunning “Huddle Formation.” Listing highlights implies that there are lowlights, but really, aside from the questionable (but aptly titled) 38-second “Air Raid GTR,” the album is all but immune to the skip button.

Whether the no-strings-attached exuberance of Thunder, Lightning, Strike is able to translate to larger American audiences accustomed to gloom and angst remains to be seen, but it isn’t unthinkable; music this infectious just begs to be heard, and the album works as well on headphones as it does at parties. And in the end, the album is so inclusive and universal that it’s hard to imagine anyone disliking it. Think of it as a party invitation: it is as thrilling and original a debut as has come out this year, and one that leaves an ingenious sonic blueprint to build upon.