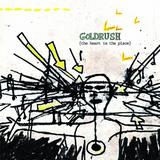 The Heart is the Place

There must be something in the Britons' water that attracts its songwriters to sappy, affected calculations of the universal. "Every One of Us," the first single from Oxford band Goldrush's third release, sounds designed to be listened to while standing on top of a building, looking up at the sky, and asking if every one of us is "fighting for position / in this impossible world," then don't we have more in common than we think? "There must be a place for every one of us," mustn't there?

So, yeah, your ability to stomach pabulum will go a long way towards determining how much you'll enjoy The Heart is the Place, a sometimes beautiful, sometimes stilted British rock album in the style of Manic Street Preachers, Elbow, Doves, Coldplay and the Verve. It's huge and clumsy in its bombast, but it has an impenitent, naïve posture that makes it easier to forgive its bluntness, and it's as positively encouraging as a clap on the back. Maybe you won't love Goldrush, but you will want to ruffle their hair.

Mapping substance onto frontman Robin Bennett's broad lyrical threads becomes a compulsion. I suppose it'd be easier to write off the band's efforts were this album its debut, easier to cynically assume they'll be handed some hyperbolic accolade or another from a British magazine, but it appears Goldrush have their share of stories to tell. An unceremonious dropping from EMI's factory farm and early work with legendary producer David Fridmann testify that Goldrush might have been destined for something bigger and are now positing their wide-eyed earnestness from the very different position of a bucket-scraping also-ran. Despite the hugeness of their sound and expansive strokes of their songwriting, they're indie now.

When Bennett sings, "If you're really so small / in the scheme of it all / then you've got to stand tall," on the otherwise pretty (and vaguely reminiscent of Brian Eno's "St. Elmo's Fire") "Can't Give Up the Ghost," it's tempting to allow cynicism to overshadow and crush the sentiment -- kindergarten as it seems -- under its boot heel. Cheesy thoughts abound, but they're hard to take real offense to, and once past the occasional Sesame Street-ism, The Heart is the Place is a professional, mature-sounding album from a band that had no business sticking around once all those big label dreams crumbled.

The one-two of instrumental intro "Aperture" and "The Story of the City" lays a defiant, ambitious groundwork for the album, cycling an immense refrain from the former into the latter. It's a gripping, effective way to open, and along with "Every One of Us" and the excellent "Goodbye Cruel World," it's enough to sustain the listener through the album's first half, at least. "Goodbye Cruel World," specifically, is a surprising, cathartic, packed but focused number. Horns, strings, flutes and effects are harmonious in their coordinated swell towards some beautiful imagery: "And they were singing / And it sounded like / a one word answer / A hundred telephones ringing." The song allows a trumpet the spotlight over the usual bed of crashing cymbals towards its end, but it's such a natural, confident bit of songwriting that it never has the feel of tacky accoutrement.

The Heart is the Place elevates itself slightly in its second half, not so much for any overbearing triumph as for its willingness to set out from Brit-rock's confusing and seemingly perpetual tendency toward redundant arrangements. "We Will Not Be Machines," counter to what its title might imply, is rigidly controlled and sounds disinterested until its last minute, when it finally allows a small amount of noise to creep into the mix. But "Heaven's My Destination" and "Sun in My Eyes" are perfect contrasts of what can and should be done with strings and horns as accessories to studio rock. The former uses them to subtly conjure syrupy charm, the latter to unremorsefully aspire to "Kashmir." The title track's cliché, allegorical lyrics are difficult to mistake for their intended profundity and soon give up on the premise of storytelling altogether ("We don't have to go back to war / We know our lives are too short"), but the music is sonorous, catchy pop that belies the self-seriousness at play in Bennett's words.

Goldrush's latest is made up of many very large moving parts, ideas and sounds alike, and at times that bigness can make it seem like Bennett and company are trying to work square shaped blocks into circular holes. When two parts don't work well together, there is little room for such unwieldy elements to stand on their own. But for fans of stadium-ready Brit-rock, this is no original sin. If one can forgive or even take some comfort in its fortune cookie wisdom, The Heart is the Place delivers on much of the band's promise.