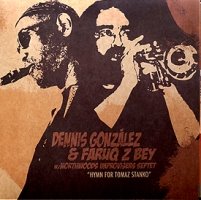 Considering that Tomasz Stanko himself spent a good deal of his career paying tribute to and re-imagining the work of modern jazz/soundtrack pioneer Krzysztof Komeda, I think it’s fair to say that Dennis González, Faruq Z. Bey, and the rest of the Northwoods Improvisers Septet can easily follow in Stanko’s footsteps without looking like your little brother’s Kiss cover band. Regardless, Hymn for Tomasz Stanko—which takes the “inspired by” route as opposed to merely being a covers record—balances stark melancholy and Afrobeat/free jazz vamp in a way that can’t be taught by anybody.

Much of the album feels like classic large-ensemble free jazz collapsed into sparse pockets of melody. “Calligraphy” starts with a deeply resonant stand-up bass solo by Mike Johnston that you would expect to lead into a tighter rhythm but instead becomes a catalyst for the saxes (Bey along with Skeeter C.R. Shelton and Mike Carey), which spiral off for long interludes every time the rhythm breaks off. As does Mike Gilmore’s vibraphone towards the end of the track, an instrument which might as well be called jazz’s “make dreamy/euphoric/spacious machine.” Oddly, the liner notes list the order of solos, as if the instruments weren’t bleeding into each other. Still, the track does service to its name, employing a series of voices which bear both the distinctiveness of handwriting and the ancient craft of penmanship.

“Kuntu” is almost a complete turnaround with Gilmore moving to marimbas for the most overtly Afrobeat track here. It makes sense if you consider that a driving rhythm is just the flip-side of no rhythm at all, both allowing for free-range expressive jaunts from the other instruments. This is probably why African rhythms have become so common in free jazz in the decades since Don Cherry popularized the notion that the “free” aspect of jazz should also be geographical. The septet continue roaming—this time to the Near East and India—for 13-minute closer “Ilam,” which flips the equation back to sparse and open again, Gilmore opening with a baglama solo and backing the rest of the track with a steady tambura drone. A track like this can seem so slow it’s practically formless but it’s worth it for the playing alone, if not the careful placing of silence.

Then there’s the opening one-two punch of the title track and “Hu-Nu.” The former is nominally the tension-fueled opener, drums rolls and cymbal crashes backing González’ crystal-clear legato trills on trumpet. But then the track goes on for over 12 minutes and the would-be build-up becomes a kind of lethargic loneliness, like playing in sweltering heat where every note is a strain. “Hu-Nu” is equally ragged (and yet at the same time incredibly precise, which is a dichotomy the band plays off excellently): it takes a staccato motif that’s played in imperfect synchronicity, the musicians playing almost imperceptibly around each other. This is González’ track, and while he’s not the most talented trumpeter, each note carries an incredible power. That’s right, the same sad cliché most often thrown around in relation to Stanko’s music. Still, if someone wrote a hymn for these guys, I’d listen to it.