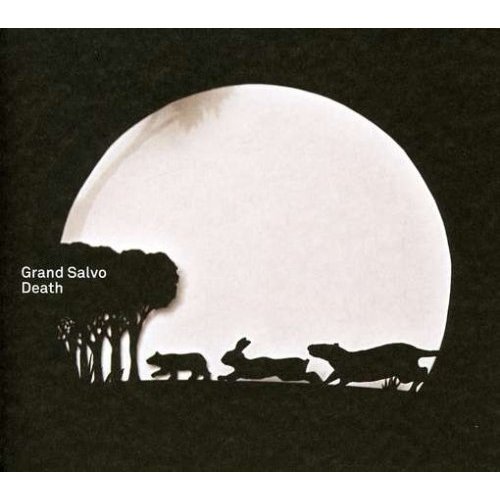 Here’s an album whose songs deserve page numbers if I ever saw one. Paddy Mann, Australian singer/songwriter/arranger of Grand Salvo, isn’t “bookish” because he peppers his songs with literary references or wears horn-rimmed glasses over a smug Colin Meloy grin; and his fourth album Death isn’t “literary” because it examines an obscure boll weevil endangered by the suffocating pages of Encyclopedia Britannica or reinterprets a Japanese folk tale via Tommy (1969) wankery or some shit (ahoy again, Captain Meloy!). Death provides story enough without such gimmickry, thank you very much, and what a story it is.

Mann’s narrative—which centers on a bird, a bear, a rat, a rabbit, and a man—begins in the woods by a riverside. Nasty winds and a merciless winter send some of the animals on unexpected journeys, leaving the others waiting anxiously behind. While Mann prudently avoids overly flowery or stilted language, his storytelling is far from straightforward. The tale’s central event—a wind-battered tree’s plunge into the river—unfolds, over the course of two separate songs, through the words of both the hunter and the bird, though each delivers a tale from different vantage points and with different interpretations. Likewise, each of the narrative’s remaining component stories is told and retold (at least once through means of a flashback, even) by the different furry creatures, each shedding its own worldview through the telling. Through its misdirects and differences of literal interpretation, Death provides penetrating insight into the very act of storytelling and what makes it as satisfying as it is frustratingly imprecise.

Don’t let its mammalian comrades deceive you: this is not a cutesy fairytale fit for bedside readings. Sure, the story runs deep with themes of companionship, loyalty, courage, and, above all, love, but it also treats self-doubt, humanly corruption, wanton killing, and suicidal contemplations with equal attention. Call Mann a postmodern brother Grimm, if you will.

From the flitting, chirp-like clarinet opening of “Bird” to the whooshing winds of “Tree Falls In The Wind,” Death strikes as a naturalist work. One might imagine it as the aural accompaniment to a lost page torn from Thoreau’s diary since, like that great American transcendentalist, Mann counters his serene, naturalist scenes with cutting political commentary, albeit of the philosophical type. While floating down the river on his arboreal vessel, the hunter, named Shaelem Relagh, finds himself face-to-face with civilization. The environmentally injurious presence is more than apparent: “The closer that I got / To that metropolis / The water got to stink / So I could not drink.” The man-made world proves equally virulent for Shaelem’s moral disposition as the hunter soon despises himself for slaving for money “like a whore” and fantasizes about turning his hunting rifle on himself. His Rousseauian ideal for himself as the noble savage has dissipated, thanks to the vices of modern society, and not even a desperate return to solitary life can salvage it.

Mann had been working on the concept for Death even before 2006’s gorgeous The Temporal Wheel and it shows. Acoustic guitar-based folk narratives adorned with stately classical arrangements are nothing new to the Grand Salvo camp, but Death finds Mann and his talented cohorts at their most cohesive and complementary. The album alternates between Mann’s sometimes hushed, sometimes courageous folk ditties and short, classically arranged instrumentals often accompanied by spoken-word narrations by Paddy’s father, Spencer Mann. These brief passages imbue the narrative with urgent momentum and ensure that the record never gets too monotonous or stale. They are at once lush and subdued.

Death’s often-insular feel may leave some thirsting for an even more adventurous, panoramic affair, one that tweaks the artist’s folk song formula as much as his lyrics twist storytelling convention. Mann’s shown steady growth as a songwriter since 2000 debut 1642 – 1727, and I wouldn’t put it past him to outdo himself once again with his next release. This speaks less to Death’s shortcomings and more to Mann’s formidable talents as a songwriter, one who can proudly stand next to Ned Collette as one of Australia’s finest specimens of unsung crooners.