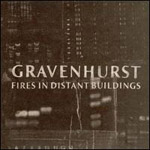 England’s Gravenhurst operate within a series of contradictions. The band performs songs about a fictional world that singer/lead-guitarist Nick Talbot has created. As with all fictional worlds, it can border on cloying in the almost naïve and wide-eyed sincere way Talbot sings about Gravenhurst; but the world is incredibly dark, filled with murderers and dark cities, so there’s a strange disconnect with this guy plaintively pining for this dark, murderous world he’s created. Also, the band works with forward-thinking dynamics in their songs, changing tempo and style within the songs repeatedly. At the same time, the changes become almost predictable in some of the songs, lessening their impact.

It’s these contradictions which can make a visit to Gravenhurst more trying than it ought to be. The band’s music breezes between a jazzy ambience that recalls Bark Psychosis and Talk Talk, moves into dream-pop territory and then proceeds to rock the fuck out. It sounds great, and indeed it can be, but Talbot’s stilted, moody lyrics can be disorienting. His songs about Gravenhurst are so overly romantic and melancholy that it can be a hard language to digest for 50 odd minutes at a time. Like any imaginary world, you have to learn to speak and accept it’s language before being able to fully embrace it. It’s a difficult step, and one some listeners will doubtless be hesitant to make. Thankfully, the music is always intriguing and rewarding.

Opener “Down River” starts with a jazz-inspired riff resembling something off Codename: Dustsucker and Talbot’s hushed-lyrics before exploding into a roaring Black Sabbath squall. That leads into the album’s highlight, “The Velvet Cell,” a murderous post-punk jaunt with a knifing riff that recalls both early Wedding Present and Interpol. The song sounds for all the world like a typical up-tempo college radio hit, at least before its two minute aching guitar coda. Talbot revisits the song later in the album, jamming and fleshing out the bare riff. “Animals” is a mid-tempo steeped with cloying coded lyrics about Talbot’s world that swells to an electronica-tinged end. “Nicole” is a sweet, hushed folk song that stands out because, unlike the other songs on the album, it doesn’t really go anywhere.

By the time “Cities Beneath the Sea” rolls around, if you haven’t yet bought into Talbot’s world, you might be inclined to shut the disc off and move on. Talbot sings about “magical stones that leave their magic on the beach when you try to take them home” over a sparse jangly guitar. It’s Phil Elvrum-esque sized romanticizing of nature that either have you nodding “yes, yes, yes,” or clicking “delete files” whilst shaking your head.

That’s the gauntlet Talbot throws at his listeners: embrace my world or go home. Sure, artists like Joanna Newsom and Phil Elvrum present similar challenges to their listeners, but at least to these ears, those two are able to express wrap something that in spite of being coded, still resonates as universal. In that way, their songs are vital. Talbot’s world seems too closed off to make any similar connection with his listeners. Either you are interested in his world, or you aren’t. It’s a shame, because as I’ve said the music is consistently engaging throughout. Hopefully, next time out Talbot will give us more of a reason to explore the world he’s created.