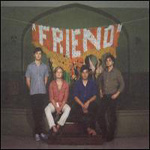 Grizzly Bear are a golem: assembled from unequal parts solo acts, guest spots, acoustic aesthetics, electrics and electronics, remix projects, traditional rock 'n roll songwriting mores, and a sense of temporary urban cool, these now-indistinguishable parts constitute a shuddering mass of size and strength. It's tricky to build while reigning and controlling, which is why Yellow House (2006) is still an accomplishment and lasting listen for how its unbroken façade still implies the multifarious. But step outside that album's warm confines and watch Grizzly Bear perform live: the songs are not the product of collaboration for collaboration's sake, the satiation of some "what if?" There's a distinguishing taste at work, trimming and refining as it includes and amends; the band's juggernaut sound emits from song structures as ordered but delicate as a cat's cradle. Substance is spun seemingly of the inchoate. That makes this EP -- a too-long distillation of gorgeous imaginings, new material, and covers by vastly inferior bands -- the diegesis of both how Grizzly Bear make music and that music's endemic problems.

I recently saw Grizzly Bear play to a half-capacity university theater, at which they erected for the skeleton crowd cavernous testaments to former iterations. It was there I heard the version of "Little Brother," "Deep Blue Sea," and "Alligator" that are here faithfully recreated; that impossible live sound, less testaments to myth-laden artists than wormholes, are captured more effectively here than on anything the band has done prior. Grizzly Bear as a torrent rising are pegged. The EP's first half-dozen tracks pose the serious question of whether Friend is a small foothold in an ascending arc of heteroglossic efforts or, as unlikely as it seems, even a worthy follow up to one of last year's best albums.

At which point you listen to CSS provide the first of two covers of "Knife," a song with value only outmatched by how, quizzically, it's used as a go-to for appreciation of Yellow House's immense depth. Grizzly Bear are one of a few conventional bands to emerge from the last couple of years' music to transcend the long-stilted format of singles and rotation, and yet the position of "Knife" as a polished demonstration of the Yellow House's otherwise meandering treasure map track list is unreasonably cemented, not only because it's performed more than once on an EP, but in that it's performed by a band like C.S.S., who, being less interested in transcending, weakly conform to a status quo that demands the band not only do all the work of music making but all the work ordering their fanbase's listening. It's not strange that C.S.S. would play "Knife" or be featured on an EP doing so. That it would be an EP in the Grizzly Bear discography, and one that's first half stands towering on its hind legs, is both strange and instantly diminishing.

Band of Horses generate more interest for the fact that theirs is a two-dimensional use of the same aesthetic that Grizzly Bear so masterfully unfurl. Where Yellow House's central metaphor of the unexplored, history-rich address was a perfect image for music with details so precise, idiosyncratic and fascinating, Band of Horses lazily toss a drop-cloth of reverb over the soulless condominium of their rock and rolling. One imagines how material like "Plans" might force them to extend that aesthetic and plumb new depths, but that's unreasonable: Band of Horses are a perfectly likeable band precisely because they contrast how those ocean-bottom depths can be alienating and demanding. "Plans" is here reduced, like Band of Horses, into an inoffensive platitude, a curiosity with no place in such a great band's spectrum.

That this eleven track disc is classified as an EP at all is an excuse, a request that one look the other way when encountering its weaker half and duplicates. Friend is neither the ingenious remix album of 2004's Horn of Plenty nor is it something new: it's a flimsy apparatus set up around an opening salvo so promising that most of it was best left for the next album. That an EP might feature an incredible cover of The Crystals is less distressing than to pair said cover with fleshed-out and unimaginative clutches at an out-of-reach golden ring. The Rossen home recording of "Deep Blue Sea" is a gentle, broken bird of a thing that elegantly closes a mangled and disjointed second phase, and concludes Friend with the assertion that if an EP offers up so much quality material with the exception of only a few tracks, which are less likable for their lack of subtlety than an inherent lack of quality, really, that it should be held up for strong consideration and make it imminently purchasable. But Grizzly Bear should be more than a sum at the end of an equation, or a careful weighing of pros and cons: they're a great band, one who should be followed and watched. And, like most great bands, their latest is crippled most by the specter of what it might have been rather than what it is.