1. Your Introduction
2. The Mean English Eye
3. I Was Moving On A Different Plane
4. I Missed The Call I Was Digging
5. The Question
6. Tiny Meadows
7. Market Town
8. June Is The Beginning Of The Summer
9. Allotment
10. School
11. So Full Of Pleasant Mystery Is This
12. Sylvia
13. Sunshine Reprise (…everything became the same and stayed that way forever) 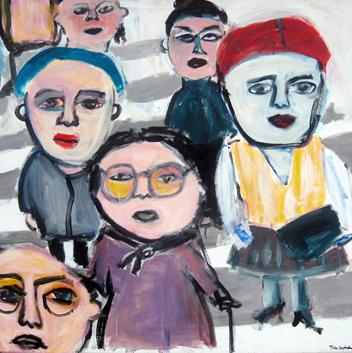 Singer-songwriter Dan Scott and his wife, performance artist Trish, had up until recently been releasing CD-Rs from their flat in Brixton, South London—records that infused pop-sensibility, pastoral psychedelia, and Boredoms-esque noise into a deliciously harmonious jumble. As always, the necessities of work and the gray squalor of London began getting in the way of creativity, but, determined to keep Happy Band of Japan alive, Dan and Trish decided to up sticks and relocate to sunny Barcelona. Their new found home sees them rejuvenated and renewed: tracks have been rolling out, they’ve been touring through Spain and Germany and, along the way, picked up a drummer, Sergio, and a bassist, Jerome.

Allotment is the culmination of all this frenetic activity, the Happy Band of Japan closing the door on their previous incarnations and setting a keen eye on the future. Beginning with news coverage about city workers commuting away from London, “Your Introduction” breezes in, literally, like a fanfare—a chirpy brass led acoustic song, a missing instrumental from Nixon (2000) walking in the sunshine. In comparison, the bare “The Mean English Eye,” which frames Dan’s croaky Ian McCulloch baritone with a shuffling Talking Heads bass and bubbling electronics, is positively nocturnal. As this trips into the dissonant shoegaze-fixated “I Was Moving On A Different Plane” it’s clear the scope of Scott’s compositions has developed by bringing in other players. Dan could previously sit erringly close to whimsy, but now there’s a muscularity and edginess which pulls Happy Band closer to early-Boo Radleys territory.

As if to illustrate this point, two early compositions are dusted down and reworked: the lovelorn “The Question,” and “Sunshine To The Brain,” now titled “Sunshine Reprised (…everything became the same and stayed that way forever).” ”The Question,” originally an effects-laden harmony fest, has now mutated into a dub inflected ballad with chiming afrobeat guitars allowing the truly heart-warming lyrics to shine through: “I built her wings out of beautiful words / And I lifted her up with a kiss full of seashells.” “Sunshine” is transformed from it’s beginnings as a simple mantra into a sea-scaped kiss-off replete with rolling surf, gongs, bird song, and warm spacey pads which close the album on a luscious honey-dewed note.

Which isn’t to say that Allotment is not entirely without fault. There are a few moments when the psychedelic tone can seem like overkill. The title track, with its repetitive varispeeded vocals against a backing of guitar scales and found sound slightly overstays its welcome, especially after the similarly drone-based “June Is The Beginning Of The Summer.” But, thankfully, there are many more moments of absolute joy—like “School,” in which Scott’s plucking style and singing voice take him into jazzy inflections that Cat Stevens or Leo Kottke would be happy with. And, from tiny beginnings “Tiny Meadows” blooms with filtered harmonies, fuzz-tones, and tabla into a reflective beauty. Even the narrated “Market Town,” with its chopped and sampled banjo/vocals, has a rootsy charm, although its wry observations about satellite towns and shop names, delivered in Scott’s unapologetically blunt accent, may be meaningless to anyone outside of the UK.

Ultimately, Allotment shows the Happy Band of Japan’s progression from cottage industry into fully-formed band. And, with its narrative themes of nostalgic images of youth, UK life, and promising tomorrows, it acts as a dazzling beacon of the beatific imaginings and sonic experimentation yet to be fully nurtured. Until then, take the time out to enjoy and cherish them, even contact them through their Myspace—they may let you in on that equally rich back catalogue.