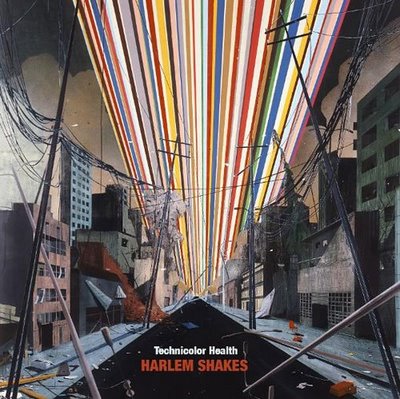 There is palpable fear at the CMG HQ. The Harlem Shakes debut LP is quietly fucking things up.

Technicolor Health is some sick candy: it’s what our indie pop should sound like in 2009. It imagines a world where The OC still matters, where goddamned Kanye West is agreeably employed, and where your little brother doesn’t think it’s just ok to listen to Neutral Milk Hotel that many times/isn’t aware of more than half of the bands the Shakes are copping freely when they’re not just writing sad songs about girls, which is a lot. This is indie pop. This is your lousy local band carried forward starship-like into a fizzing pop nebula and left to spin so fast and so ably that you ultimately forget the baggage and any corny adage; because Technicolor Health fundamentally sounds good and because its songs are well-crafted enough to make a lot of the African drumming and horns sound less like garnish and more like some well-earned reward for writing songs strong enough to make that shit sound sort of necessary. Technicolor Health is self-sufficient. It isn’t community, it eats itself. It is every good-to-great pre-Wincing the Night Away (2007) indie pop record brought forth and actualised as the definitive good-to-great (but mostly great) indie pop record you should be hearing as spring turns into summer, 2009. The Harlem Shakes wear everybody’s clothes really well.

So in comes an album with zero individuality, zero originality, zero workaroundability…and it’s really good. How good this thing can get is sort of terrifying considering how bad this material might sound in the hands of other bands. The new staff ‘round here don’t know what to make of it; the new blood you don’t know yet (they make our coffee) thought we were into Momus and shit. Now they mill around confused, attired in the standard real black regal cloak plus straw hat and tine-fork combo which Scott made us all wear that time he went nuts and gave Dave Greenwald—er, Boogz—the gun that totalled a lot of real physical music that we now can’t listen to. Fernando is particularly obsessed with hitching his uniform’s front up as Mark passes, but Mark always moves so inexorably and with this just intense direction that I don’t think he’d notice if it was Shakespeare doing it, or if God itself made an injunction and sent scattered whines across the whole left channel of the CMG Boombox so everything would sound shit or good, depending (obviously) on whether it was shit or good. Though some shit is apparently good.

We all nod for Mark, who shrugs for us. It’s this way in which we do nice things for each other that makes us close-knit. For instance the pure delight with which Clay receives my weekly sturgeon, which I fish and serve especially for him in a paper-round of Ulysses, lightly salted, as he likes it. Or the way Dom listens to Bonnie “Prince” Billy for Clay not to; or how Clay leavens DOOM for Conrad; and Conrad covers our asses for all of us; whilst Chet, in a lotus position, compromises civilizations of comparable zen to open his mouth on all those who retard the total power of ass-whipping democracy. In three words he can slaughter a gypsy. (Rivers Cuomo, when he interned, used to bathe in the butter fountain.)

So, to wit: the already bonkers HQ is going nuts! Everytime Technicolor Health comes on an argument starts. Everybody knows it’s good-to-great, but nobody seems to knows why. We’ve already mentioned how derivative this thing can sound so no bother running through the cool melodies and everything-at-once energy. You know that stuff. We know that stuff. But the reason, I think, you should know that stuff like we know that stuff (again), and in this context is because Harlem Shakes is at base-level a really talented band.

When “Winter Water” dutifully bridges into loud thumping rock music from quiet vibey balladry, it’s with a wink and a snare. Where many bands have a bad habit of not hiding their rotten schemes for blog-action via the use of unnecessary and purely fashionable devices that can’t mask the fact they haven’t studied up on how to write an effective pop song, the Shakes play it relatively straight—they, um, keep the purity of their sound. So, yeah, the big rock moment comes and introduces glorious guitar wank and some nicely affected ramshackle, but it’s in the spirit of the game. You hear the pop nous of “Niagara Falls” or the woop-woops on “TFO” and know this is a band that understands and respects the deal it’s hashing out with a potential fan-base. Like: we’ll like you, but please don’t fuck up. (Please!) This is not the sort of band to scupper a good song with marimba, or drop a dance beat to sound hip with it, or speak in interviews about how libraries made them succumb to the pressure of Satie so they just had to, y’know, just had to throw all that furniture in the mix before you lost interest. Harlem Shakes won’t do that shit. (Please!) Harlem Shakes is basically just a really solid pop band.

This is important. It’s not because the old tricks are better, but just that those tricks are the right ones to use for these songs: they wring out the most emotionally-fulfilling potential; they allow you to replay these choruses as big grand vistas on The OC are covered by a tiny camera in the air, and you, for that hand-on-heart moment, are the protagonist, dating Marissa, who never died; you are the one this music matters to. And to get all that out of a sound that loadsa people think doesn’t matter—I think that matters.

A lot of Technicolor Health makes me think of Boogz and that gun and how it sounds as if Boogz aimed his rifle at this band and demanded they play Wilco’s Summerteeth (1999) really loud and really fast and the band, terrified, did exactly that then recorded it, then got the good fuck out of there before they had to figure out an easy way to approach Nels Cline. Will we remember this album in six months? We will. Will Harlem Shakes make another great record? If Boogz makes them: they will. Will it sound like the Swirlies? Can it sound like the Swirlies? Hearing the Swirlies played really loud and really fast would be just sick. You listening, Boogz? The secret’s in the good songs. Love ya.