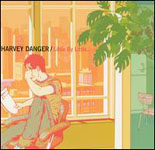 Centralia, Washington is a sleepy and haunted town. Presently, it's a quaint and poorly kept small town like any number of Western Washington towns off of the I-5 corridor. Dilapidated split level houses line the residential streets; all are about fifteen years past needing a new paint job. It is also the site of one of the most infamous labor disasters in the Pacific Northwest, five dead bodies that included four American Legionnaires and a lynched International Workers of the World organizer. A commissioned memorial --- for the Legionnaires --- remains in the town square; even without the pro-union murals, the air is thick with muted outrage, something you can taste if you couldn't see.

In Little by Little, Harvey Danger uses the city as the staging ground for modern day political insouciance. A sprightly piano introduces the principle chord changes, an unthreatening circular pattern. A bass plays a melody like a guitar would, it too in its upper register and fuzzy, inviting, loping before it plays a dark and sinister note on the second chord. Okay, so things aren't what they seem in Moral Centralia, got it. Sean Nelson sings the melody from the back of his throat, recalling, for a brief instant, Michael Stipe in the opening passages of "Camera." The beat drops after about a minute, lead by the snare drum, swinging with its teeth bared. "As long as I don't have to interact / with anyone else on a meaningful level / I'll be fine, because I don't want to marry my convictions," Nelson breathes, painting an object lesson of aggressive apathy, of willfully blind narcissm: "once again, it's all about myself." The song ends with a martial beat behind its opening theme, a pied paper leading its townsfolk off the end of oblivion.

It sounds a long way from "Flagpole Sitta," and now we need to rewind the film a bit. Five years ago, I was telling anyone who would listen that Harvey Danger's King James Version was going to be the Pinkerton of 2005. It was such an idiot-simple comparison: perceived jovial alt-rock band with video(s) in heavy rotation releases a more studied, literate and nuanced follow-up record, which is thin on hooks but long on depth, and, incidentally, blows the debut clear out of the water; radio had no idea what to do with it, and it sunk without a trace, but it bears enough of a resemblence to trends in indie rock that it should attract an obstreperous following of supporters. All I had to do was upload, wait, and practice saying "I told you so."

It isn't so, of course, for any number of reasons: London/Sire was reluctant to promote it, giving the band the opening slot for opportunists SR-71, whose fan base had a median age of about thirteen. The label also shelved the record after less than a year in the shops, and quickly dropped Harvey Danger like a lead weight. There is also no sexy rock n' roll myth to Harvey Danger's disappearance; Nelson helped get Barsuk Records off the ground, as well as being active in The Long Winters and writing reviews in The Stranger, Seattle's alt. weekly paper.

Truthfully, the band always had a limited appeal: too brainy for the pop crowd, too candied for the indies, too dorky for either. "Flagpole Sitta" is the quintessential fluke (versus SR-71's "Why?" as calculated and cynical a flash in a pan as it gets), boasting fuzzy bass, rudimentary drums, and a vocal hook that seems to be pulled through the bridge of Nelson's nose. I love the song, but I've no idea why it caught on: the co-eds who sing it at Wednesday night karaoke certainly posses TVs, to say nothing of a noticeable disinterest in independent publishing and machine raging. Maybe the world is hungrier for brainless "ba ba ba's" than I give it credit.

So here we are in 2005, with King James Version no more poised to overtake Pinkerton than Mary/Star of the Sea. This may work in the band's favor, since expectations for the post-breakup record are low, if they exist at all. It also helps that the band has narrowed its sights; as the title suggests, Little by Little finds its breath in smaller spaces, piecing an expansive picture out of fragments. It is also decidedly more modest with the songs, or at least their volume, than previous records had been.

So Jeff Lin has traded in his guitar for his piano (brief aside back to "Flagpole Sitta:" remember that noisy guitar coda at songs end, the one that sounds like it came right out of Ira Kaplan's stratocaster during sessions for Electr-o-Pura? Seriously, how the fuck did this song get on the radio? Better question: remember when a song like this could get radio saturation?), but the constant remains Nelson's wit. Here, he's replaced his sarcasm of earlier records with self-deprecation. Compare album opener "Wine, Women, and Song" with any song from Version. "Loyalty Bldng." for example, where a hungover Nelson saunters around bars, harassing the barhopping crowd: "If you're looking for someone to blame / I recommend the dead..." and then you can almost see him sticking his tongue out: "...because they never answer back." Over the stately, mid-career Beatles down-beat pop that defines most of the record, "Wine Women and Song" tells the story of his band's failures. "I figured wrong, with a capital "R" / All the baggage I brought wouldn't fit in a mid-sized car."

This doesn't necessarily spell a better record; too often it seems like they're aiming for the dorm room brooding of Barsuk alumni Nada Surf or Death Cab for Cutie, especially in the sighing closer "Diminishing Returns." John Goodmanson and Steve Fisk's crisp production keeps things from being too weighted, lending an appropriate Phil Spector homage to the mighty "Little Round Mirrors," a mid-tempo piano ballad (complete with French horns) that a band like Jet wouldn't be able to write with guns to their heads (having already tried with dumbfounding "Sexy Sadie" rip "Look What You've Done"). But then there's no excuse for "Incommunicado," a duet with Jenny Lewis that pinches a melody from Billy Joel's "A Matter of Trust."

The aforementioned Nada Surf are, of course, enjoying a second act of highly polished, unadventurous indie rock with a rabid fan base of men in their early twenties. It's not hard to imagine Harvey Danger as the next in line for that story, but then I've been wrong before. They could do better, of course, for if the band could fit along side of the No Doubts and Cherry Poppin' Daddies for a day, they could fit comfortably in the fractured and idiosyncratic lineage of the community that spawned them ten years ago.