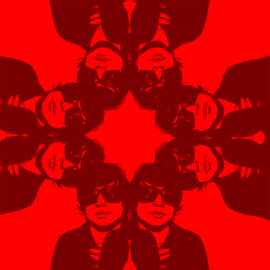 Islands of Ayle, Hawnay Troof’s sophomore album, is like a group-hug between strangers in a sweltering show space—simultaneously implacable and infectious. The same could be said for Hawnay Troof’s front-man, Vice Cooler, a jilted Alabaman lover-boy who is apparently friends with almost every reputable indie artist alive today. He has toured and performed over the years with experimental and dance acts like Mr. Quintron and Miss Pussycat, Numbers, and Gravy Train!!!!. Since it all began in 2002 with the EP Who Likes Ta?, Cooler’s Hawnay Troof has evolved from a crude, deeply perverse toss-up into a fairly sophisticated electro-pop outfit, reminiscent of “one man band” artists like IDM free-styler Cex and bad-mouthed drum machine maven Peaches.

On Islands of Ayle, Cooler and an underground all-star cast of collaborators (among them Jenny Hoyston of Erase Errata, Jamie Stewart of Xiu Xiu, and Randy Randall of No Age) produce a record that is boiling over with spasmodic oomph, full of strange pops and squeaks, unidentifiable hits and bracing starts and stops, cute melodies and bouncy bass-lines. Cooler keeps up the heat with his brassy free-styles and chants. All in all the record is a departure from Hawnay Troof’s earlier material—still unpredictable, daresay schizophrenic, but mature and pop-oriented.

The songs are meticulously assembled from a library of samples that Cooler collected during a twenty-month world tour. Cooler recorded the cow bells that get mutated on “Zhou Zhong” as he passed through the Swiss Alps. He worked via e-mail with Bretzel Göring of Stereo Total to craft the lo-fi melody of “Front My Hope” and other 8-bit-style samples. One might expect that a bunch of samples from around the world would lend the record a hermetic “new age” feel, but it’s quite the opposite.

Cooler is at his most innovative in “Bizarre Triangle.” The song starts out with a sustained screech, accented by a high-pitched wail that seems lifted from the Battles song “Atlas.” Then the 16th-note pulse of a synthesizer comes in, the screech turns into chord progressions, drums evolve out of a synthesized snare and an echoing clap, and a scratchy synth counterpoints the pulse. Cooler raps at a near-incoherent speed. During the chorus, he chants, “Make it, take it, grab it and bake it, stick it, lick it, double-edge wicked, mix it, grip it, double-end dip it, ease it out and double-end flip it.” The line seems lifted from either a porn director or a cooking show host; the effect is intoxicatingly perverse.

Following the great 8-bit Nirvana-pounding closer “Out Of Teen Revisited,” the album simply ends, abruptly. At 31 minutes, it’s a disappointingly slim release—but forgivably so, given how sophisticated a departure it is from Dollar and Deed, 2006’s double-album of FruityLoops anthems that grew more tedious with each listen.

But following Cooler’s development is worthwhile, no matter the length of the release. Hawnay Troof is no longer the FannyPack-style caricature who, back in 2002, told his listeners, “If you like to dry hump (Yeah, yeah! Yeah, yeah!) / Get prepared to be dumped (Yeah, yeah! Yeah, yeah!).” Islands of Ayle is his strongest effort yet. He is moving into pop territory, but strangeness, dissonance, and hyperactivity are still Troof trademarks, as agreeable as punches to a masochist’s gut.