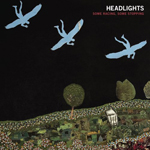 Some Racing, Some Stopping

There is something to be said for the music of Headlights. This much is obvious—the music enchants, plainly, on first listen and more with each subsequent spin. It is a balanced record in tempo and mood with a confident smattering of sonic embellishments. I like it a lot. Most people who have heard it seem to.

But it could be damned, accurately, in a sentence, a shell-shot right to its cred-pumping indie heart. I could call it emo. You could argue against it, but we’d have a fight. (I’d win.) What’s most obviously wrong with liking this album, though, is how clearly the songwriting cues are stolen from other bands—noteworthy bands, ones that made a dent in the sonic landscape—and aped completely by Headlights. I can’t pretend to predict what type of reviews this record will get, but it seems safe to say that its artistic softness will sully a few scores, and this is justifiable. There is nothing new on this record. It is the easiest and hardest record to love of the gray new year. It sounds like Stars, but I fucking hate that band. My heart is saying yes but my brain is saying no.

By my score you can see which team is winning. Unlike other releases which wear their influences proudly the result is not a postmillennial cross-bred pop apocalypse, like (for example) the Avalanches, Devin Davis, Kanye’s second record, or whatever else. This band sounds at times like the Wrens, Bjork in a spot, and in one wrought case Elliott Smith, but it’s just that: at times Headlights sound like these artists, and remarkably so, and for that one track and no longer. They are jagged and unashamed rip-off artists, cons playing to our collective nostalgia, and at least one CMG compatriot has remarked about feeling “fooled” into liking Some Racing, Some Stopping.

It’s a tricky record, for sure, and the lyrics are uniformly forgettable, stuff about hearts pattering and time marching on (seriously), which puts the burden of proof squarely on the songwriting, which is, again, immensely likeable and immensely derivative right to its very chord structure and dynamism. “Market Girl” falls into moments of withering orchestral circumspection before toughening back into careening bass-drum verses, tightening with handclapping finality and totally reminding you of the third track on You Forgot It In People (2002). (“School Boys” does the same thing again two tracks later and you will again feel duped in relishing it.) Erin Fein sings with a lovely quiver over a simpering Brill Building bloom on “On April 2,” and you will think your iPod shuffled to “Pull Shapes” the first ten times it starts. “Catch Them All” sounds like the Get-Up Kids would’ve if their attempts at maturity had contained within them an iota of actual maturity.

But there is an unequivocal romanticism in these sounds and in these lyrics, if we do dig a bit, and it pulls through to the title, which is about (yes) hearts racing, hearts stopping, so love and death but mostly love and life, and so if these guys and girl are rip-off artists, they are of the highest order. Hard criticism be damned and this is a gorgeous thirty minutes of music. They skirt close to other bands, uncomfortably so for my stolid critical brain, but in so doing they extract that which is most stirring and put it toward their own purpose, which is to simply induce longing within you. It is a slender, limber album, blissfully aware of itself and not daring to overstay its welcome. It does what it comes to do and is gone in a Figure 8 (2000) hush. It will smelt your reservations if you give it the chance to and you, like me, will find yourself a happy, keening puddle by its warmth. It’s February; give in.