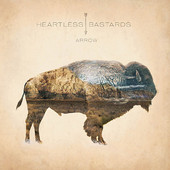 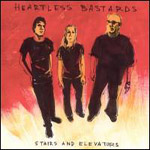 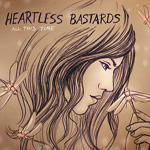 In lieu of writing another introductory paragraph tracing the paths of all of the post-millennial American buzz bands, let me just say this: Heartless Bastards have followed exactly none of their peers, neither the Black Keys’ reactionary path toward purity nor Liars’ didactic catapult toward guttural infinity nor anything between. If Stairs and Elevators, the Bastards’ 2005 debut, was noteworthy for its lived-in authenticity, for Erika Wonnerstrom’s quivering howls, and for its deft tunefulness, then All this Time finds the band sacrificing all of that album’s appeal at the altar of unabashedly populist songwriting. To be sure, Wonnerstrom still wails, but where the vocals were the lynchpin of the debut, here they function as a rarely used embellishment. In “Brazen,” for example, Wonnerstrom coos the song’s rolling melodies, letting the rhythm guitar crash and burn and steal the show, raising her voice only to chant, “I’m wide awake!” -- which she only does as a build-up to a song-closing guitar deathmatch.

Indeed, it’s the rhythm guitar (of all fucking things, right) that deserves the most credit for All This Time’s success. But the chord changes aren’t complex, and there’s nary an ostentatious riff or flamboyant solo on the record. These songs rest upon simple, sturdy progressions, played with muscle and grace and infused with a large humanity — a songwriting principle that’s more Coldplay than Casablancas, which means that the album has the potential to be hugely moving (Parachutes) or maddeningly out of touch (X&Y).

Obviously, I’m buying into it. These songs are meant to be played loud, driven to, listened to passively for months but sung passionately all the same, believed in, memorized. These ten songs are anthems, if only because the Heartless Bastards will them to be. From the echo-laden, crystalline pianos that start the album to the thumping, triumphant pseudo-solo that closes it, All This Time strives — and mostly succeeds — to soundtrack your life. The lyrics have been excruciatingly pared down, so that vague ideas of “home” and “longing” and occasionally “relief” surface, but always couched in such general terms that a real connection is inevitable. To wit: “All this self-destruction / It is keeping me from functioning / And I try to build things up / I build things up and I tear them down,” from “Blue Day,” could relate to anything from relationships to, like, The Elder Scrolls 4, depending on when you (I) listen to it.

Now, none of this would mean much if there weren’t hooks. Fortunately, they’re all over this record, and what they lack in immediacy they make up for in skin-tugging tenacity. It may take a few listens to notice them, spread wide as they are, but they’re there. “Searching for the Ghost” isn’t an outright thriller or anything, but the chorus is a fine little run, full of peaks and downhill sprints, and it all turns sublime when Wonnerstrom nails a higher melody on the last iteration before a thunderous rhythm guitar carries the song away. “I Swallowed a Dragonfly” rocks a slow, wordless whistling, all lilting oohs and chirruping strings; a quick minor key switch proves positively cataclysmic in this cavernous setting. I could point to more examples, but to do so I’d probably end up picking the track at random. And it’s perhaps this — the album’s consistency — that is its truest triumph. Unlike Stairways and Elevators, All This Time holds no clear standouts and no obvious duds. Pick a favorite; you’re not wrong. Which, by some definitions, means the album is perfect.

But a universalized record has no edges, and though the Heartless Bastards deserve recognition for making music so benevolently wide-reaching, a question remains: who gets more credit, Jack White, following his marimba muse toward uncertain treasure, or these eager-to-please Bastards? We could debate the point, but, honestly, let’s not. A lot of the argument would rest upon a hypothetical third album, and I’d rather just enjoy this one. Because while this may not be the best album of the year, it is the best album the Heartless Bastards could’ve possibly made right now. Which is a hell of a lot more than most bands can claim.