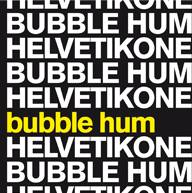 Darn those diligent Germans. They’re the first country in Europe to officially point out the world’s in financial recession, then they pull a complete flanker by squeezing the history of beats onto one fifty-minute CD. Not-so-spanking new kid Helvetikone—I’m guessing the lovechild of a typeface and an elevator repair line—has been squirreled away in his Berlin workshop for a full five years now, going Michelangelo while he tries to keep time on his circuit boards and futureproof mixers. Sheesh…five years is a long time in electronica. You go in thinking you’ve got a future “Born Slippy” on your hands; you come out one president later and it’s already yesterday’s ringtone.

The ambient nuts have got it right in their approach: soup. Something fluid and scalding that historians could attribute to possibly more than one decade. The only problem comes in the final edit, when it’s time to work out what’s flotsam and what you should stir in the pot. How do you mix all those train journey eurekas into one medium hot turkey chilli? Behold Bubble Hum, and prepare to feel a bit bloated. The flair and thinking on Helvetikone’s debut are incendiary, but they hit you so thick that, at times, it’s like swallowing a bowl of tequila worms. You need a strong lining not to start stumbling.

Helvetikone could easily be the most upfront graduate from the grand old school of mischief to date. He concocts a dark chrome tangle that occasionally delves into rainbows and turns out a parade of eleven little arrow frogs as his signature: deadly, colourful, thumbsize. The blocky anger and baby jungle are all a bit mid-nineties FSOL, but there’s enough melodic light tinges and Autechre channeling to get the clear-headed seriously interested. This is not just another itchy bedroom adventure, not exactly anyway—“Dark Star” revs like a pumped-up Prodigy, and the slushy stupour of Disney strings that keel into industrial on “Phobia” are worthy of anyone’s video-making skills. If you like your IDM to arrive with a squirt of the rough stuff, you’ve come to the right yard. Equally, if you want to take in a steroided chiptune loop and watch it bare its teeth at electro, you only need to go as far as “Cis (Dev)” to get your perfect fill. Its neat and lively editing is almost tangibly German (you can hear the ghost of Kraftwerk rattling a few old doors), and show off the grey matter of their earnest and beaming creator. It really is pretty much all in there for you—from Paul Van Dyk scratching in a library (“Nothing”) to a greetings card cover of the Knight Rider theme (“Mosquito”).

So why does it at times feel clunky? Bubble Hum is a bright, hard and intelligent album, and anyone with an hour of study time and an urge to clear cobwebs will in all likelihood dig it. All I’m saying is, be careful. Think of those instructions that fell on deaf ears when your fingers first curled round that illegal speckled tablet. The world is about to get filtered into a shiny and relentless program, and if you’re not careful you’ll end up unable to piss for four hours, jiving like cell phone interference. It’ll rattle you, and chances are the close-eye visuals will have you thinking you’ve just glimpsed the elixir. You did, but just remember that it may become cloudy tomorrow when the lasers hand over to sunlight. You’ve got to watch out for those choppy prisms and the beats that follow them like cloaks. They’re a bastard.