1. The New Kid Revivial
2. The Truth Hurts So This Should Be Painless
3. The Heartbreak Moment
4. The Year In Review
5. No More Good Ideas
6. The Boys And Girls
7. Sleepy Tigers
8. The World Will Deem Us Dangerous
9. My Crooked Crown
10. Four Tapping Shoes And A Kiss
11. The Telescope
12. Two Tin Cans And A Length Of String
13. The Day In Review
14. One For My Soul (Good Night) 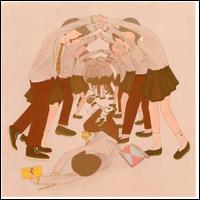 Well isn’t this just adorable? Vaguely Halsey-esque cover art and song titles so cutely precise you’d think Marc Bianchi had picked Conor Oberst’s pocket. It even starts off with its own innocent little mission statement: “Let’s start the New Kid Revival / Make it up as we go along / And if you tell us we’re doing it wrong / We’ll just turn up the sound of our songs.” All of this is a little nauseating, but that’s not terribly surprising coming from the solipsistic mind of Bianchi. The one man band has adopted a new moniker (XOXO Panda) for this sun-drenched romp, and, given the pith here, it’s easy to picture Bianchi hunched over an acoustic guitar lazily strumming, conjuring adolescent-isms, and trying to tap into his inner teddy bear. And perhaps that solitude is the problem, since it seems there is no one to tell Bianchi to tone down the inanity a bit. He is—apparently not obviously enough—an abysmal self-editor.

So, here I am, covering the rounds: Like most any adult attempting to compose campfire fodder for the Death Cab demographic, Bianchi’s sentiments ring hollow, his tenor’s earnestness bordering on ridiculous. The arrangements vacillate between simple acoustic strumming to simple acoustic strumming with some effects and the occasional harmonica tossed in here and there. To say the writing properly matches up with all of this isn’t really a compliment, but: “Laughing like two little kids / Sitting in the back of class / Only thing that’s on my mind / Is how to make this last” accented by a few multitracked “oohs.” Yeah, it fits.

To compound matters of awfulness, Bianchi beats all of this thoroughly into the ground. Head trauma or not, I swear that several of the tracks here are only vague variations on the same melody, slightly different chords augmented with chintzy clicks or plastic organs. And when there is actual deviation from the tried formula of knee-slapping sing-a-longs, it results in “My Crooked Crown,” which features hushed vocals and naked, blushing hopefulness (“Just keep on walking / Towards that sweet, sweet sunshine”). Believe it or not, in the context of its thirteen obnoxious siblings, “My Crooked Crown” serves as a somewhat pleasant respite from all the cuddliness, even if it’s just muted, wide-eyed non-sentiment. A collection of songs like this would be mercifully innocuous, some beige, somber pining blending into the walls. Or, even better, the track that follows, “Four Tapping Shoes And A Kiss,” which admittedly just rides a mildly sludgy guitar line, a staid piano, and some clacking percussion, but it could at least plausibly incite some hip-shaking. But after the two song, um, peak, Bianchi returns to composing music over which plastic dolls are forced to rub blank nether regions together: yuck.

I’d like to think my cynical curmudgeonliness is preventing me from enjoying this and I’m just raining on a gleeful, wonderfully spiritual parade with my dour nitpicking, but lazy cheer isn’t any less lazy due to its lightheartedness. Standing dick-out in the middle of the street isn’t any less stupid just because it’s whimsical. And I relent: perhaps I just don’t get it, and I can’t feasibly enjoy music that wishes so fervently to be enjoyed, to exist as a soundtrack for me to meet pigtails and adorable floral dresses and coyly whispered seriousness or some such. But all I hear is vague honesty in place of actual emotion or considered writing, and frail vocals smeared across the whitewashed wall doesn’t compensate for a severe dearth of substance.