1. Agnes of the World
2. Postpone
3. Circumstance
4. Burning Up So Badly
5. Nothing’s Bound
6. How You Feel About Traveling
7. Albert Hash
8. Hildebrand
9. Writing Letters in the Morning
10. Just Because It’s Quiet Doesn’t Mean There’s Peace
11. Which Side Are We On? 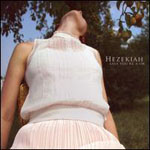 The great thing about indie labels, particularly small ones, is the consistency of their curators. If you’re a fan of Explosions in the Sky, for example, clicking through the rest of the Temporary Residence Limited roster will probably turn you on to Eluvium and Mono. A glance through the Sub Pop website will take you from the Shins to the Fruit Bats, Beachwood Sparks and, well, Wolf Parade, but Sub Pop’s stable is a little larger than average. The still-young Yer Bird Records, on the other hand, has three proper albums to its name. All of them are quality and all of them are so much in the same vein that they could be triplets separated at birth; Sounds Like Fall’s The Wolf Is at The Door (2005), Nic Garcia’s The Desperate Ones (2006) and now Hezekiah Jones’ Hezekiah Says You’re A-OK are all warmly recorded, somewhat mysterious-sounding folk records that conjure up campfires, deep woods and full moons.

Like any set of siblings, each of these albums has its quirks: Sounds Like Fall’s leans a bit heavily on country music and Garcia’s is dark and murky. Hezekiah Jones adds humor to its stoically performed acoustic folk, and that’s what makes the album stand out. Sure, the trappings of traditional folk are all here -- quietly, quickly plucked acoustic guitars, careful harmonies -- but the songs aren’t afraid to make fun of themselves. “Writing Letters in the Morning,” a song that bemoans a summer that hasn’t “been the greatest,” is so bored with life that it self-awarely narrates the actions of the song’s piano: “I’m playing one chord / One chord in my right hand / The descending bass line in my left hand.” “Hildebrand” is also wittily meta, spending the verses between the chorus of “How long can we not say what we’re thinking?” goofing around with mock Tom Waits can-banging and yes, avoiding whatever it is that’s really on frontman Raphael Cutrufello’s mind.

There are plenty of more somber tunes. Tracks such as “Agnes of the World” and “Burning Up So Badly” recall early Iron & Wine in their simple aesthetic. The harmonies are sparse and spot-on, with just enough added to keep the songs at the campfire and out of the church. Five of the songs are under two minutes, and the brevity allows them to make themselves noticed and leave the listener wanting more. “Agnes of the World” might be the album’s best in this regard, its form mimicking its content as it describes a romance over too quickly (“Grounded for the summer / Trouble with your mother / I couldn’t have been much dumber / So I left you for another”) just before its final strum. But there’s more going on here than just clever songs and articulate fretwork: “Just Because it’s Quiet Doesn’t Mean There’s Peace” echoes Simon & Garfunkel’s use of speaking samples on “7 ‘O Clock News / Silent Night,” laying talking under its hypnotic titular evocation. “Hildebrand” opens with a sample that would seem at home on a Wu-Tang record.

Hezekiah Says You’re A-OK is a balancing act, paying homage to the beauty of traditional folk even as it winks to the listener. By the time “Which Side Are We On?” reaches the end of its eight minutes and the album comes to a close, the question is moot: the band can play both sides equally well. More credit to Yer Bird, then, for giving Hezekiah Jones the chance.