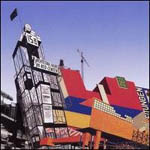 Maybe if a four year-old told me that “Bunnies are Full of Magic,” I would find the misunderstanding cute. The misunderstanding’s just a misunderstanding, though, when stammering off the mouth of staid avant-indie, Ben Lanz’ bleary trombone and a decidedly un-jaunty drum waltz hitting the CNS like a bottle of Nyquil.

Press dudes tout: Item! “Asymmetrical”! “Prog-jazz” meets “indie rock” on a bed of “no-wave dissonance”! “Post-punk” and “krautrock,” too! Do you like Battles?

Guys, magic’s not in the item, it’s in the execution. That Architectural Failures ends, begins and is comprised of misunderstandings (on the band’s part or mine or maybe the confused both of us) makes its title too appropriate; the blueprints are fucked, ambition’s crumbling all over, and the listener stands at ground zero beneath that Stanley Donwood-channeling cover art.

These cats just can’t get enough of the discordant, the atonal, the obtuse, but instead of an electronic-ambient cousin who’d, at least, be those descriptors in an atmospherically arresting context, Hi Red choose to baffle the world with a jam band set-up that makes like, “This shit’s complex and fun.” It’s truly just complicated, though, and it’s a chore, requiring too much good will from the person on the receiving end. Outside of the misguided meander of “BTTLS,” Battles don’t so much task their audience as sucker-punch them in the gut. Hi Red Center perhaps think that the blow should be softened, that the process of destruction could be endearingly traded for its shambled results, that they can put some slacker vox-kitsch lyric on top like college radio maraschino, that there are pop ways of making difficult music tasty while keeping it difficult: good intentions contrary to a style that thrives on bad ones. Sharpening the visceral and heightening the violent, Battles know how to maximize the appeal of their music. They tightly batter our brains, and we’re thankful for the intensity of the cerebral sensation. See, HRC, I’m not interested in a distended corpse accompanied by nonsense elegies. If you’re gonna be nice guys, sign to Barsuk.

“Red/Green” pancakes a guitar line with the buzzing white spaces of Russell Greenberg’s electronics, drums frothing away recklessly in the background until in break those “asymmetrical” vocal harmonies, stopping everything, talking about how “humid air is extremely hot” in a disembowelment of the melody to Pearl Jam’s “Elderly Woman Behind the Counter in a Small Town.” It’s ugly, it’s awkward, yet one does get a vague idea of how Hi Red’s mad method might just work. But then try enjoying the stunted, trebly vibraphone equivalent of a punk riff on “Captain Waltz,” or that song’s lyrical virtuosity: “1,2,3… me / 1,2,3… you / 1,2,3 … we.” “Evildoer” toys with squashed polyphony, stuffed fat with fill percussion, like the half as listenable prodigy to the completely unlistenable back-end of Danielson’s “Two Sitting Ducks.” In fact, Architectural Failures centers many of its songs around the same unmotivated perversities of Quirk that Ships at least had the decency to relegate to aesthetic trappings and vocal hysterics. “Eureka” may only be 1:56, but its meaningless compost of exclamation points feels interminable.

I take no pleasure in panning a small, earnest band like Hi Red Center, but if there were only one point to this review, it would be to ask these fellas, “Why?” Because I dig on some of the fragmented ideas tumbling around in the ruin, I find myself half-nodding along to the fuzz-chunk and splayed measures of “Alarm Will Sound,” or I swallow a “pretty?” at Eno-nephew “Hollow Buttons,” and I have to wonder why this possibly talented band insists on making music that lies predominantly on the other side of entropy. Perhaps all it would take for a successful sophomore effort is a square answer to that question – and a cocked hammer.