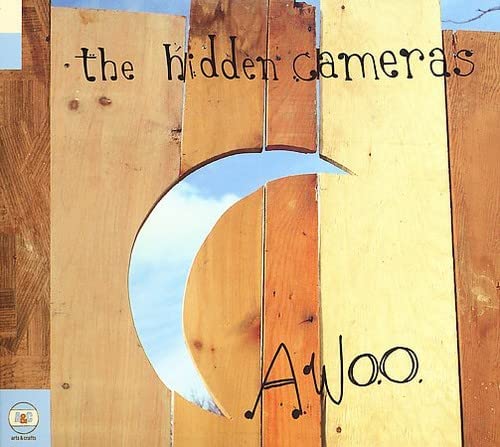 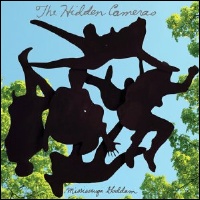 Whether we know it or not, bands like the Hidden Cameras are the ones who inspire that collective yawn from the mouths of critics when we hear some indie act trying to sneak their release past us by throwing straight up the middle. We’re going to call them out on that shit if only to make the money paid to make those feckless shit heaps pay dividends in belly giggles. But, as aggravating as this mewling practice is, it is also confusing. Why should an indie artist want to sneak one by us at all? Making inoffensive music can’t be your highest aspiration, can it? Has the time-honored art of the cash grab record really insinuated itself into the hallowed subterranean?

For the Hidden Cameras it has clearly not, because it is records like Origin: Orphan that jar us awake—awkwardly, imperfectly—to the weird and circuitous possibilities of indie pop. True, Orphan is something of a down-tempo departure for the Hidden Cameras, but it retains most of the sprawling idiosyncrasies that have come to characterize the group’s chamber-psych-folk indie since they signed with Rough Trade in 2003. The marginally more somber tone of the individual songs (there are many walls of forbidding horns on this record) doesn’t mean that the tenor of the album overall is less frenetic. It isn’t. In fact, no matter which touchstone you’ve been using to appreciate past Cameras albums by, it’s here.

A counterproductive example: HC fans are well aware of Joel Gibb’s fixation with his own falsetto hoot, which is akin to Andrew Bird’s ubiquitous whistle, and sometimes—like Bird’s affectation—does more to distract than to add. The hoot is worked into the playlist on Orphan as actively as ever, and as always it can grate, but like Bird’s these songs are just too sturdy and forward leaning to be knocked far backward by a few petty annoyances.

More substantively: The effortless kitchen-sink craftsmanship is here too on almost every track. “Ratify the New” has a Middle Eastern flair that appears nowhere else on the album. The brooding horns in the verses and breakdowns of “Walk On” pump with the big band energy of a hellish university fight song. “Silence Can Be a Headline” sounds like your mom’s prom night slow dance if the soupy, tuxedoed hired guns were really, really on their game that night. “Kingdom Come” is pure Shins.

I mean, for fuck’s sake: “Underage” is both a male choir showpiece and a Joy Division homage, which actually kind of makes sense while you’re listening to it. Then the horns and the hyper-crisp drumbeat lend it a tang of world music. That doesn’t make quite as much sense. Then throw in lyrics that are explicitly to do with a problematic preteen sex fantasy and I promise you haven’t heard anything like it this year.

Which leads me to: The jubilant prurience is here. It’s just that the naughtiness has been sublimated a little, pruned back and pocketed into concentrated stanzas on “In the NA” and “He Falls To Me” instead spilling and frothing all over every track. That particular kindergartner has been sent briefly to the back of the band class so that his yelping wouldn’t so effectively distract from the playing of the instruments. The instruments are played with a joyous aplomb as always, but there’s a new and genuine beauty in the swoon of “Colour of a Man” that reveals more explicitly than ever how talented musicians must be to create the trademark shambolic Cameras sound.

The title track also has a very Shinsian orchestration and pacing, except for Gibb’s insistence that the only point of identity for the song’s protagonist is the fact that he lives life as a whore. James Mercer doesn’t often swim in those waters, choosing to hover serenely, however closely, above them. But, hot damn, Joel Gibb does—he’s already in there waist deep and beckoning This guy’s a whore, ladies and gentlemen! In every sense of the word! In fact, he’s so much of a whore that he can’t even think of a single other way to describe himself! There were themes this jet black on Gibb’s other records, just buried under impulsive sprays of candy necklaces and finger paint. Here he lets some of that desperation bleed into his drawn out delivery and the siren call that bolsters the beat of the track.

The point is that all of the Hidden Cameras is in here, but it’s not all shined to a high polish and adorned with neon lights, and that works an interesting effect. They didn’t hedge their bets. They didn’t sacrifice their sound for dubious expansion. This record aims at an introspection that the others have never really attempted. The cover of The Smell of Our Own (2003) boasts a camera emblem drawn on a makeshift cape on the back of a naked man. There it is flapping in the wind, barely covering his buttocks, a proud standard bared for everyone’s benefit. AWOO (2006) presents us with a moon-shaped peephole in a wooden fence, all low-tech mischievous Tom Sawyer voyeurism. The camera on the cover of Origin: Orphan is wired directly to a human brain. It protrudes from the cerebral cortex, and that connotes an invasion more intimate and purposeful, one that may not be fit for xylophones and sleigh bells.