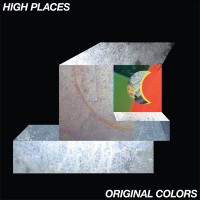 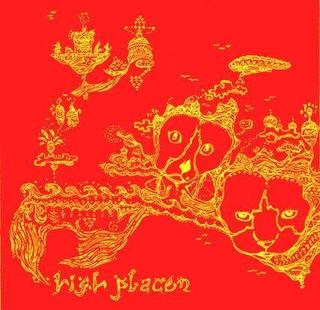 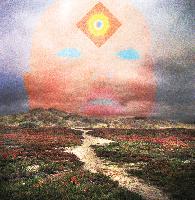 2008 has turned out yet another year in which music crit opens with statements both cane wielding and grayed for their tendency to mark dissimilarity if not recycled trends. Mine is no exception, but High Places, like 2008, demands such statements, considers them like the kitsch they turn out to be, and ultimately pegs good fashion sense across chiasmic divides. I’d like to think it’s an indication that music has become a way past articulating difference and is now comfortable being of it.

So here it is, my fist-shaking, doom-mongering opening statement: to the degree to which anything is allowed to be “long-awaited” these days—and one wonders if leakage, where losing patience over less than a two year wait, is returning us to the land of the 45 and yearly releases—High Places’ debut qualifies. A short series of excellent singles, compiled as 03/07-09/07, were released this summer as a sort of primer for High Places’ snapshot contemporaneity: their less-is-more insistence on being a duo, despite this music’s polyrhythmic and densely layered quality, evokes Byrne and Eno tooling around with meta-statements about making music. Except the rub is there’s no statement to it, no meta, no sociology paper waiting to be boringly birthed.

High Places may have been our contemporary concept of long-awaited, but only because it seems like this is the only year in which it could have presented itself. It needed the Avalanches, the Go! Team, El Guincho, and Matmos to have exhausted the novelty of the methods and left the means to very familiar ends. There’s a build, a gradual, patient construction of tones and dynamics against which Pearson’s vocals, doled out with steaming ladles of reverb, are searing the atmosphere above Barber’s pseudo-World syncopation. And that level, probably the one which we should be most quick to give a damn about, means High Places is an indie dance album about rhythm rather than dancing, that’s danceable without pandering. It doesn’t sound anything like the music of its scene yet does sound like about a trillion things from elsewhere.

I’ll bypass lyrical analysis if only because like A Sunny Day in Glasgow, one of my favorite groups from last year for almost exactly the same reasons, the substance I’m concerned with here is in the easiness and fluidity of the aesthetic despite the seemingly cross-genre qualities that are (quite literally) at play. Suffice to say that Pearson’s lyrics are hardly ruinous, more so childlike, and seem almost entirely beside the point. Opener “The Storm” and closer “From Stardust to Sentience” are the defining tracks: the former for how it quickly elucidates the spaces and formula going forward with its perfect length and see-saw percussive tones, and the latter for how it culminates each gradually revealed molecule—percussive folk instruments, found sound, sampled guitar lines that are twisted into barbed twine—into the album’s most smoothed-out electro-pop song. Between those two pillars the songs elaborate and refine, completing a picture that sounds like it was wholly realized before a note of it was committed to hard drive.

The ease with which one finds oneself listening to High Places belies nothing of the kitchen-sink approach to percussive collection that formed it, that wondering and childlike impetus for using household objects as the backbone for a song that must result in nine aberrations for every one learned result. And if that’s the context then we’re on track to something (dare I say it) pure here. Cue the contention, I know, but I don’t mean pure as in “natural” or “responsible.” I mean that High Places is, in 2008, purely of its time. It doesn’t try to evoke some canonical adherence that’s inherently elitist. Style as gesture, the joyous place from which High Places are writing sounds suspiciously like rebirth for an art world exhausted by documenting the horrors of tumbling towers, burned out cities, and the trudge of exhausting complexities.