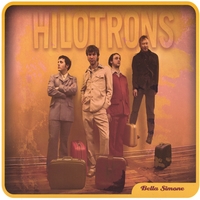 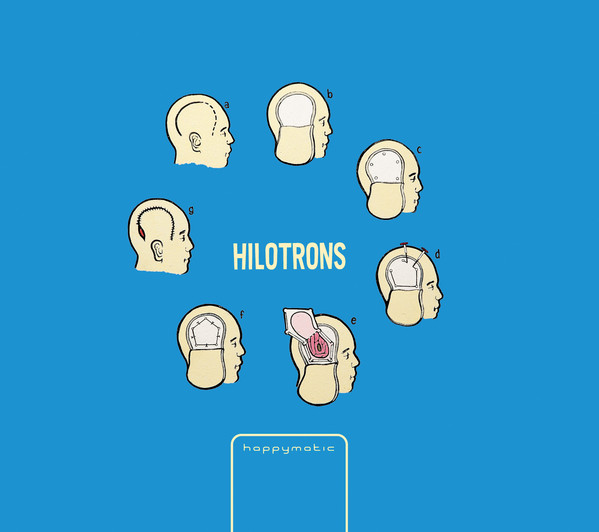 When writing music reviews I typically try to do what everyone else tries to do: come up with something that no one else has said on the subject. In this case, untypically, I’ll simply be honored to echo and amplify the central thesis of every review, interview, and puff piece I’ve ever read on HILOTRONS: this band is so flat-out incredible that I‘m frustrated to the point of shaken faith at their anonymity. With this I retell a familiar story, one told since time began by critics who fancy themselves countercultural. We spit our impotent venom at an industry that makes stars of dilettantes while the truly talented languish in obscurity. Nothing happens, most times, and life goes on. Where my predecessors had the Velvet Underground and Alex Chilton, in the era of the long tail I have HILOTRONS, and I would wipe every copy of every record on CMG’s top 50 albums of 2007 off the face of the earth to save one copy of Happymatic.

No matter how much I protest that HILOTRONS are unparalleled masters of their craft—never a misplaced note or misshapen tone—or that band leader Mike Dubue’s (along with guitarist Paul Hogan’s) songwriting is utterly singular without resorting to experimentalism, it won’t do any good. That some band members, particularly Hogan, are among the most impressive musicians in terms of pure instrumental prowess that I’ve ever witnessed doesn’t matter. Whether the band is as stupefying live as it is on record (it’s a tough call) won’t change anything. And I don’t think it’s because they don’t tour widely (i.e. much at all outside of Ottawa) or that they’ve been screwed by labels and/or distributors. It’s not a got-to-pay-your-dues thing. Bands are plucked out of nowhere all the time, and plenty with far fewer hard knocks than these folks. No, these guys just can’t catch a break, and I could include them in podcasts, interview them, and write online webzine love letters to them for the rest of my life without changing their luck one bit. Yes, we live in a world where the popularity of Wolf Parade is enough to sustain not one but three yelpy moustache bands, yet the Horseshoe doesn’t even fill for HILOTRONS’ CD release. There is no God.

And so it is with a heavy, disappointed heart that I love Happymatic, the third installment in the HILOTRONS consistently thrilling catalogue. I’m not too concerned here to make the usual distinctions between their last album and this one; they’re both great and my bet is that you haven’t heard either. Much of what I say here can be applied to both their self-titled debut and the heart-stopping Bella Simone. There’s also not much to say about influences or other bands in the scene because, what scene? (There are lots of kickin’ Ottawa bands, but none of them sound like this.) What influences? Sure, nothing comes from nowhere but this band’s take on the three minute pop song is so distinctive that there are few aural referents; comparison can only be drawn on the level of spirit or gesture. This is why the reviews, such as they are, struggle to place HILOTRONS by throwing handfuls of non-adjectives like “‘80s” or “new wave” at them. Their uniqueness is subtle—not announced with layers of obfuscating noise or deconstructed song structures. Initially the songs on Happymatic seem to fit squarely in pop molds, but further attention reveals that, like Neutral Milk Hotel, the band subsumes all sorts of left-field sounds into its own tightly controlled musical language.

Unlike a sprawling genre-hopping mess like Odelay, where a bunch of duds and silly moments are the cost of the wide musical range, Happymatic is able to cover the same amount of ground while sounding more like HILOTRONS than anything else. This is principally due to the supreme mastery over their gear that Hogan and synth architects Dubue and Mike Schultz constantly exhibit. Hogan’s angled surf interjections (lathered with warm tremolo) into Dubue and Schultz’s cold synth lines create one of the central tensions that keep this record so taut. Perhaps even more impressive is the restraint the band shows in their arrangements and production. Though they possess an absolute embarrassment of virtuosity and sonic imagination, the band lets some of their best ideas last for only a second. Witness in “Deep River” the huge drum pickups in the chorus or the three-note arpeggio after the vocal line at 1:53; these are almost chamber pop touches, changing the mood of the song abruptly, but they only last for a bar, if that. With ideas like this poking in and around every verse and chorus, you could imagine some sort of Olivia Tremor Control haze of overdubs. Not so for these high mages of restraint; Happymatic almost sounds like it was recorded live off the floor.

All these dichotomous tensions—between restraint and wild imagination, between the forward progress of the song and the lateral movement of the instrumental interplay, between the dark subject matter and the incessant beat—exist in such a perfectly flexed balance that your ear can never rest on any one shiny bauble for long. There’s rarely anything secondary like a rhythm guitar part or synth chords. In nearly every song there are intertwined guitar and synth hooks, melodic and robotically funky basslines, background vocal chants as catchy as the lead line, and all the time you’re wondering if the ass-shaking beat is the real star of the show. It’s perfect pop, and yet it’s far-flung from the model of song = chords + melody + embellishment. Everything is the hook, and each element weaves together to form the song in which one instrument, mood, or gesture rises to the forefront only to immediately fade back into the network.

“Emergency Street” is equal parts paranoia, futurism, and fractured disco inferno. The frantic energy of the band is encapsulated in the stop-start instrumental interplay here. The first measure goes to the robofunk bass and shuffling kit. The bass then rests for a bar, the second beat of which sees a split-second guitar chord and two beats of handclaps. Bass in the third measure and handclaps in the fourth. Repeat bars one and two and in the seventh measure a descending set of staccato guitar chords meets four synth eighth-notes to close out the eighth measure. All this before the vocals have even entered, and the song will see Dubue’s kinetic lead, a girl-pop chant, a detective monologue, and an all-sing na-na chorus before it even passes the two minute mark.

Dubue and Hogan’s lyrics are difficult to parse, but there’s a dark longing that reaches both toward and away from the dystopian buoyancy of their sound. Hilarious and poignant images rise to the surface out of his relentlessly rhythmic diction. Moving beyond his hyperbolic sci-fi lyrics about samurai robots, astromen, and dancing to science fiction music, now Dubue offers wry gems like, “I bought bought bought the rights / to morning noon and night / you should come over and check them out sometime.” This, from “Comrade Elvis,” is sung half through vocoder, and the amazing thing is that it’s not a joke. Campy and funny, yes, but “Comrade Elvis” kills on stage and off, and is delivered with the same severe deadpan as the rest. Then there’s his penchant for the non-nonsensical lyric; not content with the basic “la,” Dubue litters the album with non-words of all sorts. He and his ad-hoc back-up choirs are incessantly chanting, yelping, or otherwise yipping along, often imitating the sound of the Korg lines they’re doubling. The whole thing adds up to some compact cyborg of life-affirming enthusiasm and claustrophobic paranoia that mirrors the even split between organic rock and robotic dance sounds happening on the sonic side.

The universe of HILOTRONS is ever-expanding. Whether it’s the bouncy pop of “Lost in Yichang,” the almost-Caribbean bop of “Lovesuit,” the maniacally cyclical “Girls,” or a Kepler cover that’s even slower than the original, Happymatic’s accomplishment is generous enough to gather all this diversity into an intensely cohesive record. It’s a staggering achievement, and one that may never leave the Ottawa valley. When all my grandstanding has the anticipated non-effect and the world spins along blithely in its ignorance, there will still be some good done by these cyborg wizards in their home town. In a scene stuck between Toronto and Montreal, a scene constantly berating itself for being too boring, too conventional, and too bureaucratic, there is yet pop music of the highest caliber, music that effortlessly encompasses the extremes of ambition and accessibility that bands so often pay lip service to yet so infrequently occupy. And if we need to wait for the next generation of Ottawa bands—bands who know what it means to be a great pop band because of the one in their home town—to tell us about it in their liner notes, so be it.