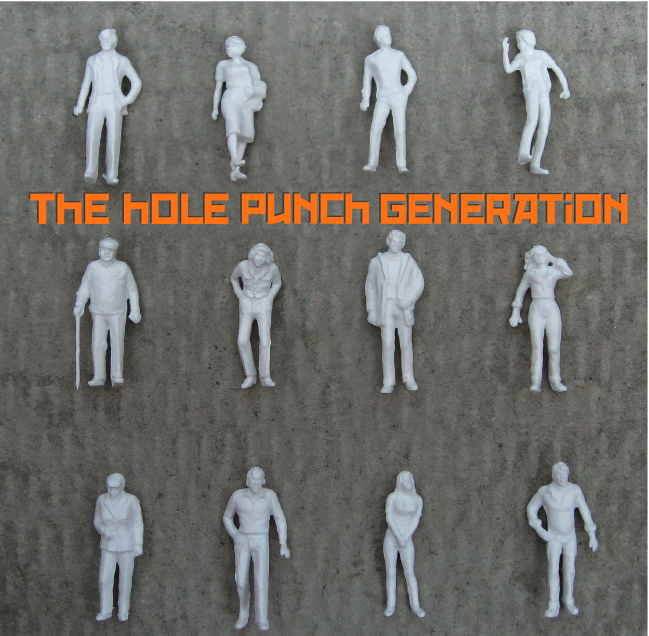 Boston trio the Hole Punch Generation formed five years ago, and since then have been fine-tuning their “sounds like” radar to nail as many big names as possible. A quick look at their Last.fm web reveals impressive icons: Sigur Rós, Arcade Fire, Radiohead, and Coldplay, plus 24 pages of unsigned duos who vaguely sound like M83. With a lure that big they need a pretty good hook, and luckily they’ve got one in the form of vocalist Patrick Balthrop, who howls like someone’s bored two 4mm holes in him using penetrative office equipment. How ironic. While he plays guitar against the synth, drum, and video tracks of Caleb Ebbs and Adam Sturtevant, the Hole Punch Generation identity takes form: break-up songs drowned in neon gloom, or Cut Copy channeling Gordon Sumner as opposed to his friskier dance cousin Bernard. You’re given seven seconds to imagine how that kind of fusion could possibly work until “Don’t Go” explodes, bursting into life with a sledgehammer of shoegaze that hits you and vibrates for forty minutes. Welcome to the world of the Hole Punch Generation: everything thrown at you, kitchen sink first.

Surprisingly, everything that follows the kitchen sink actually sounds pretty good. Balthrop’s falsetto can easily handle the drum crunches and giddy keyboards like the pained teenager he’s mimicking, and as he screams, “Don’t Go / Don’t Go / Never forget” on the intro, you get an inkling of sincerity, and not just the notion these are razor blades he’s half-heartedly leaving for his family to discover. It helps that his bandmates can match his voice for intensity; the blasts of dejected guitar on “Shallow” are just the job for first-time runaways, and “Masquerades”’ chiming riffs paint summers as cruel as anything Bananarama dreamt up. Balthrop’s singing is only part of the Hole Punch Generation’s arsenal—they take a surgical approach to songwriting, with each track’s breathy neurosis carefully dissecting Roxy Music’s Avalon (1982) and everything on Type Records. If you want disheveled symphonies, you’ve come to the right place. If you want Richard Ashcroft’s solo career crossed with the sounds of an interrogated unicorn, you can come in too.

The one thing THPG isn’t is bland, which is odd considering the apparent lack of restraint in its try-anything formula. People halfway out the door will pause by the time “The Mornings After” kicks in, because it’s not often you get to hear a three-piece band attempting Squarepusher drill beats (especially when the singer’s just stunned you with a “Wish I could kill them all”). It’s the same story on single “Conversations,” where a slightly less-than-Squarepusher drum loop still kicks the bejesus out of a hangdog guitar line. Every time you think HPG are defaulting to conservative pop-rock, they lunge in a spontaneous direction, and force you to go with them and attempt to keep up or have your arm violently dislocated.

Occasionally they swap their energy for something more dreamy, such as the folk leanings of “They’re On To Me,” where Balthrop steps five paces back from the microphone, but there’s the suggestion that these are just dips in excitement rather than a slump or distraction. If you want their manifesto in one easy nugget then look to the finale, “Coyotes.” It’s here where, after eleven previous passes, Balthrop’s indecipherability winds itself beautifully around Ebbs’ electronica and Sturtevant’s patter of drums. It feels right that you can’t tell what he’s singing. The sane people out there might question the intentions of a band who put only six clear lyrics on a forty-minute pop album, but the sane people are not to be trusted. They haven’t digested 250 bands to make one album. Or named themselves after a desk utensil.