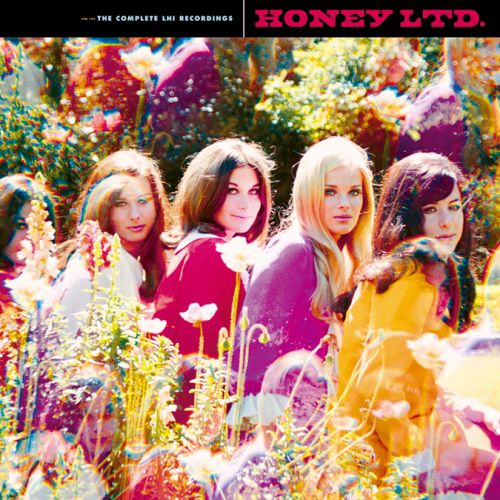 The Complete LHI Recordings is a strange sort of compilation: every studio recording (thirteen in total) by Honey Ltd., a group that was over almost before they began, with only a handful of singles and television appearances to their name. Active in 1967-69, Honey Ltd. is a group that probably few would remember, a fact that, along with their minor key harmonies and strangely sophisticated sound, lends them the mysterious out-of-time air of a dusty flea market find. The Complete LHI Recordings is not really an album so much as a relic, but treated as lost-and-found artifact, it’s a surprising, engaging, and at times haunting listen.

Honey Ltd.’s story has the easy-accidental feel of many music stories of the era: right place, right time, right connections, right sound. The group’s members—sisters Joan and Alexandra Sliwin, Marsha Jo Temmer, and Laura Polkinghorne—met as freshmen at Wayne State University in Detroit, all with musical backgrounds and inspired by the now-legendary Detroit music of the era. When harmonizing together in their college cafeteria, they realized they has something unique, and pursued it first by auditioning for Bob Seger’s manager, Punch Andrews, who named them the Mama Cats and booked them supporting gigs all over the city. In 1967, the girls took the next logical step and headed to L.A. in search of a record deal. They scored one, and on their first try, too: with Lee Hazelwood’s label LHI.

The members of Honey Ltd. themselves, despite writing many of their own songs and arranging their own harmonies, are earnest yet not that interesting, which partially explains this collection’s lack of gravity. Light in the Attic’s extensive liner notes paint a portrait of intelligent, good-girl coeds dipping their toes into the L.A. music scene of the late ’60s. The off-kilter bluesiness of the group’s songs mirrors the strange situation they found themselves in: plucked from a life of fraternity parties and local Hullabaloo-style dance shows (Temmer was the professional dancer of the group) and suddenly knocking around Hollywood, “a little stoned” and attending parties with the likes of the Bee Gees, all before the tumultuous backdrop of 1967-68.

The music of Honey Ltd. is more interesting than their backstory, particularly the roughly half of it that is original. The Complete LHI Recordings works best on vinyl; not only because it is in mono, but also because of how neatly it divides between sides A and B. Side A features mostly original compositions by Polkinghorn, and it’s where the group really shines. “The Warrior” catches fire instantly with its combination of mystical-psych verses and a thumping, dark chorus that reminds of the Mamas and the Papas and even Dusty Springfield. That it’s an anti-war tune wouldn’t be immediately apparent, as the choir-girl harmonies are unexpected paired with such subject matter. But there’s something haunting about the way the members of Honey Ltd. harmonize with one another (constantly switching parts, legend has it) that really comes out here, as well as on highlight “Silk ’N Honey.” “Come Down” is similarly intense, with urgent verses (“There are people who love you”) and the vibrato-heavy coda (“I’ve got you now”) on “No, You Are” is equal parts trippy and chilling.

Much like Hazelwood’s most famous collaborator Nancy Sinatra, Honey Ltd. are at their best when stretching outside of standard girl group subject matter, and the few tracks on here that don’t (e.g. “I’ve Got Your Man”) are somewhat less memorable, as are covers that share about a third of the record (most notably Laura Nyro’s “Eli’s Coming” and the Kingsmen’s “Louie, Louie”). Though the group’s signature harmonies make for an interesting take on these songs, particularly the slow-motion outro on “Louie, Louie,” they are always more refreshingly weird when singing their own material. The record, which proceeds in more or less chronological order, unfortunately peters out after a strong start, delving into covers and closing with two instrumental pieces—unfinished compositions from around the time LHI began to struggle and the group dissolved. After a promising career beginning with heavily promoted singles and even a USO tour in Vietnam, Honey Ltd.’s career fizzled without fanfare, and The Complete LHI Recordings seems to do the same as it plays out.

Despite its unfinished feel, this record is one curiosity that’s worth a listen. There’s something about the sound of these four women’s voices—belting out and vibrating and switching parts—that captures a sort of intangible druggy strangeness that’s lacking in many girl group revivalists. The Complete LHI Recordings manages to maintain a sense of unease that was certainly more common during that era, but now sounds genuinely surprising, especially coming from a group of very young women with church-choir backgrounds. Honey Ltd. creates the feeling of the late ’60s bottled and released; and though their career was just a blip in a great decade of music, it’s something any self-respecting nostalgist won’t want to miss.