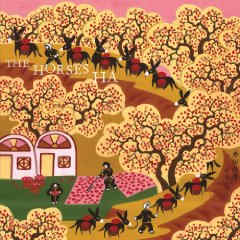 One gets the impression that they’re missing something important about Horse’s Ha. Scouting about the web for background information I see a number of interesting shreds and evocations: a Dylan Thomas short story, folk traditionalism, Freakwater and the Zincs, Chicago, Thrill Jockey, the creeping inevitability of death, etcetera. But Of the Cathmawr Yards never quite seems like the sum of this duo’s aficionado parts.

The album is an aching anachronism, not just in its folk throwback vibe or its forlorn melancholy, but its sluggardly pacing. And ultimately it might be this lethargy that lends one to feeling as if the point has gone whizzing by. The album begins where most albums enter their final third, “Plumb” dragging itself along without the pretense of engagement. “Wild’s Empty Bedroom” is drowsy enough to lose most listeners entirely; it’s easily the album’s least interesting (and interested) song, and its location in prime album real estate as the third track is puzzling.

The immaculate production and effortless performances simply struggle for breath under the coffee shop plinking and syrupy strings. Where “Left Hand” makes some amends by picking up the pace (barely), its jazz-lite shuffle and muted trumpet convey white people clinking glasses of red wine over expensive dinners rather than the tragedy and foreboding the lyrics may have hoped to embody. In fact, by the time one gets to “Rising Moon,” one wonders if the constituent referents of Horse’s Ha shouldn’t be Chicago subculture but the Mamas & the Papas playing dreamily in the background of a Boomer business.

But hey, Mama Cass never hurt a soul. And if Of the Cathmawr Yards is anything, it’s as inoffensive and placating. But it’s hard to imagine anything so disinterested in anything beyond its own plodding pace making much of an impact on a person’s listening regime. The best the band could do is take this folk stance and make it somehow relatable to the sort of listeners like those in Chicago, blessed as they are with one of the most storied and diverse stocks of bands in the country. What Of the Cathmawr Yards ends up instead is a cold catalogue of personal taste and increasingly diminishing scope.