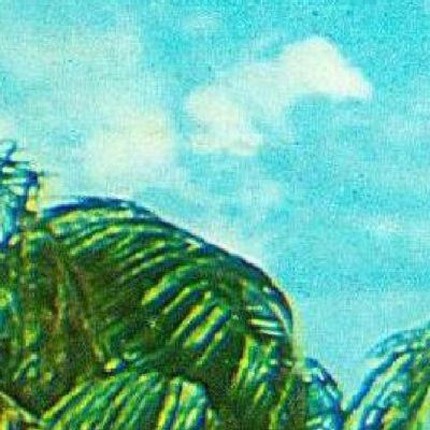 Hairdryer Peace is like that bit in “Gareth Brown Says” when Falco drops the c-bomb (just six words in!) and things momentarily seem ok/not ok till you realize that this would only be insulting, if it wasn’t already so fucking insulting. That’s Hairdryer Peace in a nutshell, which, admittedly, I’m being sort of pointless and sort of reductive and sort of really totally fucking missing the point, OK, but I do think you’re gonna want to know that this record takes its title (and amazing cover art) pretty seriously. Like, storm samples and everything.

This is a record on some difficult, challenging trip—doing (it seems) pretty much everything over its half-hour to break the listener and push all kinds of tolerance thresholds—and none of it, really, based on noise or mechano-vibration or any of the other reverb-y sleights you’d expect from a band called Hospitals, whose last record (I’ve Visited The Island of Jocks and Jazz) seemed to endlessly dwell on the more hostile aspects of its sound. Hairdryer Peace is partly like that—it is noisy—but there’s nothing trivial or trashy about that noise, and the sorta smugness that can plague scene records has been ushered out for genuine invention.

That said, this is a psychedelic record through and through: taut, and chalked over by soundbites and re-takes and overdubs and the sort of heavy, humidified mixing that centralizes you in on whatever this stuff is without ever really revealing itself. Case in point being the title track and opener: all sliced feedback and barking volume cut so you don’t so much hear the bounding drums fade in as feel the skins go straight for the incinerator. And this is before Adam Stonehouse goes on his “I feel queer!” tangent, at which point the thing really goes goose: taking a full swing turn into blues rock territory, except a blues rock built on stray licks and prolapsed introversion loaded with Dylan-baiting and funky keyboard dissonance and the kind of bruised rumination that suggests wasteful existence.

Elements of the mix overlap, and then those overlappings encircle and damn if I’ve heard another record so insulated, so bent on its own person; like an exacting antithesis of Weezer (2008), Peace takes its elements of noise and pushes them to giddy extremes before arranging all the pieces into something aesthetically memorable, and weirdly (weirdly) catchy. There’s “Getting out of Bed,” which cycles through a surf-rock bass and aggressively panned horns, all blithe to its bedroom juxtaposition, the bubblegum pop of its vocal that weights stoner cadence and finally cedes to what I guess is the sound of tape eating tape. Which is a really good sound and, like the rest of the more “out” elements of Peace, is used sparingly in audacious, genuine what-the-hell moments. “BPPV” takes infolding tubercles of noise and mashes it to horrorhouse keys and mantra drums as Stonehouse slurs and shouts “I feel dizzy / I feel stoked!”, like a cartoon character lost in an environment he might have just made himself. “Rules for Being Alive” is a dada take on the talking blues, caught in embryo and situated on some straight borderline between tenderness and something bats. Bum-notes and woozy, oversexed keys move through it like a migraine aura.

The breadth of this record is something special: the breadth of its sound, the fearlessness of its style, the relentless (and winsome) way it wields its own indefinable ambiguity and sets it on constructs not totally there, song-forms that aren’t so much open as they’re crazily boxed-in and prevented from developing. A lot of Peace sounds disorientated (check: “Sour Hawaii”) and undifferentiated, but its sounds—the way it recycles its own riffs and fucks with context—retain a sense of direct purpose. Each instrument—and take—seems to fit only insofar as its reach allows; reciprocal identities get smudged and everything, finally, builds to a whole that seems to be witness to its own absence.

So this isn’t so much fourteen songs played together fast as it’s fourteen tracks so relentlessly and colourfully inventive that it’s almost as if this thing we called noise music finally came of a piece; as if these undescended psyche fragments got pulled together by the sheer, swirling momentum of applied trauma and finally congealed into something smooth, consistent, and maybe even frickin’ balmy. As a sound map of a uniquely messed-up consciousness, it has the capacity to frighten and puzzle and maybe even mind-alter. More than anything, when (if) it’s over, Hairdryer Peace feels like it “works.” It’s a genuinely inspired take on the bedroom wigout.

By the way: you have to hear this thing I did on Goldwave yesterday. It’s insane.