1. An Introduction to the Album
2. The Scope of All of This Rebuilding
3. In Framing
4. Your Deep Rest
5. Among the Wildflowers
6. Life in Drag
7. Housebroken
8. Discomfort Revisited
9. Dendron 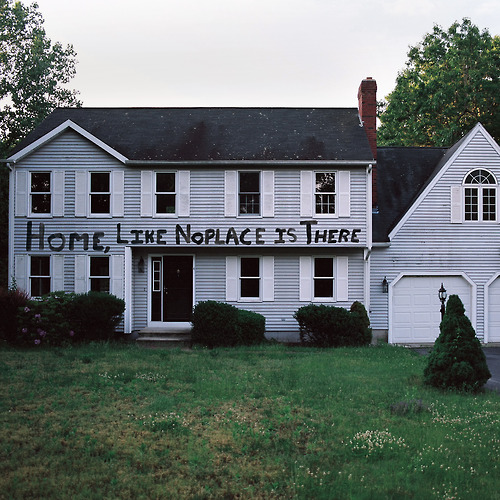 I grew up a huge Brand New fan. This was pretty unavoidable. Half my teenage years were spent in an online music community where Jesse Lacey was on par with Jeff Mangum and the other half were spent as a bookish teenager in the subfaction of the tri-state area’s pop-punk community where it mattered whether you were team Brand New or team Taking Back Sunday. Especially on their first two albums, Brand New were perfect for a sixteen year-old fuckboy. They were wordy and had a tongue-in-cheek façade of macho-douchebaggery that they occasionally let drop to reveal the sensitive douchebag underneath, all with massive choruses that you screamed along to like they were the goddamn truth. I wrote about their Deja Entendu (2003) when I was nineteen as part of a “Top 100 Albums of the 2000s” feature and the blurb paints the record like the quintessential document of the Sensitive Alternative Boy, the thing that got “us” (as a writer, I was still totally under the impression everyone in the world was a white boy from Poughkeepsie) better than any of the dime-a-dozen emo records that defined mid-‘00s pop culture. The point is, Brand New were the band that I wedded myself to, as they were one of the closest approximations of “me” I could identify in a musical group. And one day they didn’t matter anymore.

This is how it went with bands like Brand New or Taking Back Sunday or Fall Out Boy or whichever was your poison during those formative years when FEELINGS were culturally the most important thing ever. They got left behind. Their fans got older. Feelings changed, priorities shifted, and the Livejournal-esque metaphors in songs like “The Quiet Things That No One Ever Knows” just didn’t resonate the same way they did to sixteen-year-olds in the mid-2000s. No amount of nostalgic scab-picking has worked to bring them back, either. Brand New stayed somewhat relevant by expanding into darker, more mature territory, but Taking Back Sunday shit the bed after reuniting their original lineup, Fall Out Boy’s comeback felt cheap, and pretty much every other “it” band from that generation I can think of either disintegrated or left the pop-punk aesthetic behind. As trends from formative years tend to do, the whole emo thing got put in a box in an attic, to be looked upon as a gentle reminder of an embarrassing but sentimental time, but assuredly dead.

So it’s 2014 now, and here’s this Hotelier record packing melodrama in the form of motherfucking whoa-ohs in the first song. You’d be forgiven for brushing it aside. I mean, it almost feels cloying when you put it on. Singer Christian Holden comes in a-wailing “OPEN THE CURTAINS, SINGING BIRDS TELL ME TEAR THE BUILDINGS DOWN!” and the fortress of cynicism goes to work picking it apart. For starters, the opening track of Home, Like Noplace Is There (lol) is called “An Introduction to the Album” (lol), and by the time those aforementioned whoa-ohs rear their sentimental heads The Hotelier have essentially hit every point on the “teenage nonsense” checklist. The first time I listened to it, I got to the chorus of “Your Deep Rest” that goes “I CALLED IN SICK FROM YOUR FUUUUUNERAL” and I put it away as a record I’d outgrown before it even grew on me. It was meant for a self that I’d left behind. Most likely, I wouldn’t come back to it. Only I did. At first, in what I perceived as moments of weakness (“Boy, I could really use some whoa-ohs right now”), then with comfortable familiarity, and then with fervor, because Home, Like Noplace Is There is not a record that brings me back to being sixteen, but rather a record that breathes life into memories, uses the grand-scale emotions of mid-2000s emo not to talk about girls or parents just not getting it, but about some serious-ass shit.

There’s a ghost hanging over Home, Like Noplace is There in the form of a friend who committed suicide. He’s the “you” addressed in every song, in apologies (“I called in sick from your funeral / The sight of your family made me feel responsible”), accusatory diatribes (“You cut our ropes, left the umbilical / Now I’m lost and I can’t take this path back home”), and simple recitations of the events leading to the end. It listens like hurt expressed via pop-punk cliché, but the giant choruses, anthemic shuffles, and voice-shredding octave jumps feel like musical motifs revisited to evoke a shared past. On “In Framing,” we get this lyric packaged in a galloping chorus: “With your nature reversed and our home as our cage, you caved and you asked is this coming of age?” It’s a short, stark scene, packing the turn from adolescence into adulthood with the appropriate anxiety. One turned back, leaving the narrator to make sense of it all using the means he knows. “I’m sorry. This isn’t easy. I don’t know,” he yells in the middle of a long, bitter screed against his friend. It listens more like “Where the fuck are you, dude?”

Home, Like No Place is There is one of those records, the kind that either don’t really affect you or turn you into a blubbering pile of jelly depending on whether or not you ever thought “pop-punk” was something that actually needed defending, but less disputable is the fact there is a fuck-ton of heart in this impeccably written record. Holden delivers lyrics like anxieties piling up on top of each other, bending thoughts around the ends of musical phrases so that the next idea is already half-expressed by the time your ear catches up. From “An Introduction to the Album”: “You felt blessed to receive their pleasant / Sound of things that break / Make you cringe inside yourself / There’s a child counting stars in their time / Out of their day, in the corners of their frame,” and so on until an appropriately cathartic climax. And while we’re on lyrics, my god, the way Holden can evoke a character: “What’s that note you’re writing there? Why are you giving me this back? This was a gift from when we met back when you weren’t so upset!”; “I’m just jealous because I tried mapping out your mind’s inconsistent ways / Tangled and untied, I watched your ends start to fray.” It’s melodramatic, yes, but the layers to the narrator of Home, Like Noplace Is There are vast. This guy cycles through a series of emotions, each feeling valid, each feeling like an appropriate result of confusion in the wake of a huge loss.

Observe how it concludes: the emo record for the sixteen-year-old concludes its narrative with a bow, generally something poignant and either sweepingly epic or fittingly somber to put a definite “The End” on things. American Idiot (2004) has “Whatsername.” The Black Parade (2006) has “Famous Last Words.” Taking Back Sunday always would swing for the fences. Brand New, too. But things don’t quite resolve for Home, Like Noplace Is There. With a story this heavy, one expects a resolution where the narrator reconciles the events and moves on. Instead there’s “Dendron,” wherein we get an ambiguous admission of responsibility (“I felt the noose tighten up on your collarbone and I felt the gun in the small of your back”), a suggested nod to the appeal of suicide (“You were right to doubt”) and a final lyric that throws the whole situation back on those who, in the face of mental sickness, did all the wrong things: “Engraved in the stone by request and recurse of friends dead: ‘Tell me again that it’s all in my head.’” It’s an end that doesn’t suggest peace but continued disillusion.

Home, Like Noplace Is There is about a lot of failures, but the most egregious is that of a world that didn’t understand the record’s narrator or his friend. And in this style, where so many “parents just don’t get it” screeds have been laughed off as asinine prepackaged on the shelves of Hot Topic, it hits like a truck. It’s about the narrator’s failure to understand his friend, and it’s about the friend’s failure to adjust. Both positions valid. There are no winners in this record. It’s a tragedy about the confusion and hurt of getting old in a world that still refuses to understand you, and experience tells us the best way to capture that emotion is through some motherfucking whoa-ohs.