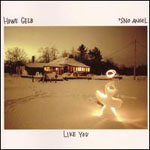 At a blues festival in Ottawa three years ago Giant Sand frontman Howe Gelb had a revelation. As he awaited his time on stage, he listened to a series of performances by local gospel choirs. One group in particular, Ottawa’s Voices of Praise, impressed him. “When you get to my age and something grabs your heart and head like that,” he says, “you celebrate and bask in it. I was physically moved.”

Gelb was moved, indeed. Moved enough to pack up from sunny Tucson to Ottawa in winter (no adjective required.) Eight of the tracks on ’Sno Angel Like You were written with the Voices of Praise in mind. Gelb and future Arcade Fire drummer Jeremy Gara laid the drums and guitars down first then the choir arranged the harmonies themselves. Three of the tracks are Giant Sand songs and the remaining three were written by Tucson musician Rainer Ptacek.

Called experimental, unique, weird -- Gelb’s music hasn't tended, necessarily, toward the transcendental. Though at moments brilliant, Giant Sand often don’t seem able to resist the electric guitar flourishes and wank-off distortion that, by and large, render their music less interesting. There is a focus to this album that, on its own and when considered in the context of Gelb’s career, is captivating. I know, I know. Gospel choir = sounds transcendental, right? Well, basically. But what’s most compelling about ’Sno Angel is how Gelb and the choir play off one another.

Taking the advice of the Voices of Praise choir leader, who thought the collaboration could work as long as Gelb could “keep it positive”, the songs' themes don’t veer too far what one might expect of the gospel genre. Just give the song list a quick gander and words like “Paradise” and “Enchantment” pop out at you. Through their delivery, though, you get the sense that Gelb’s lyrics might mean something a little different to him than to the choir. On the album’s opener, “Get to Leave”, for instance, when they sing the lyrics “get to leeee-eeave” the choir seem to be relishing the “better place” Gelb mentions while he seems to be celebrating just that there is an end to life on this “planet made of rock, hard liquor and discomfort.” On “But I Did Not,” Gelb reels off a list of things he felt inspired (by the devil?) to do in a desperate moment: “felt like burning down the home / felt like buying me a gun.” With the repeated incantation “But I did not” the choir attempt to sway Gelb, who sounds increasingly conflicted, down the straight and narrow.

Gelb was smart to take the gospel route on ’Sno Angel Like You, a group of songs that ask a lot of questions but offer a fair amount of counsel too. Weighty and authoritative, the gospel backings help convert Gelb’s often world-weary musings into straight-talking wisdom, the kind of stuff you want to listen to on a bad day. Even with a god-fearing choir behind him, Gelb is too thoughtful to ever come across preachy. It’s a thin line to toe but the contrast between his insightful lyrics, his gravelly croon and the Voices of Praise’ wholesome harmonies produces a sound that’s surprisingly three-dimensional. Even the album’s most presciptive anthem, “That’s How Things Get Done,” a list of instructions toward better living, communicates enough depth to leave you wondering whether Gelb’s got the keys to the kingdom or whether he’s mocking the person who professes to: “Ain’t no way for yourself to get fed / You don’t get up, get out of bed.”

Who ever thought gospel could sound so sexy?