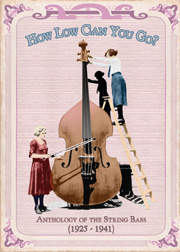 Fans of Melrose Place might remember an episode from the soap’s boring, earnest, unsoapy first season where newly-hired writer Billy, after lying to Jake and Matt that he’s had dangerous experiences, struggles to write his first column for a local paper. He wants to write about his adventurous life, he sits at the computer, but it quickly becomes one of those awesome moments where anachronistic film conventions overrule the realities of technology. What’s the universal signifier for “frustrated, unsuccessful writing”? Billy keeps crumpling up pieces of paper and throwing them away in disgust, and though there would be absolutely no reason to do that with a computer, the director was obviously at a loss for a new way to convey this.

Similarly, I was reminded of how tentative we are with new things when I was browsing through this collection’s lush and informative book. Many of the photos of these stand-up bassists show them in formal attire, bearing bows and cradling their instrument like they’re about to perform a sonata. None of this music sounds like that. But it’s the same issue as the problems with showing technology on television (or, hell, with music criticism)—we constantly explain new things in terms of what you already know.

Of course, this collection is about old things, or rather a thing that isn’t new anymore, but was once incredibly new. The basic rationale for this project—beyond the normal Dust-to-Digital MO of restoring ageing tape and vinyl to digital sound—is to explore the interwar world of the stand-up bass. The source material all dates from this period, book ended roughly by the introduction of the stand-up bass as a louder and more versatile alternative to the tuba as an anchor in dance and band arrangements and the instrument’s eventual decline after the introduction of the electric Fender Precision Bass in 1951. There’s something interesting there: as the liners point out, the electric bass was adopted so quickly because of the stand-up bass’s inability to compete with drums and amplified guitar (in everything ‘cept jazz, of course), which is the same reason that the stand-up bass itself was adopted over brass.

I think you can look at this collection three ways, then. First, there’s the basic idea: the kinds of bouncy, walking bass lines that proliferate here just don’t sound the same on electric bass, and therefore don’t exist anymore. What we have here is a lovely document of that string-slap fingers-cranked-across-the-frets head-bobbing sound that is rarely employed as anything more than a gimmick in today’s low end. Second, this set is a loosely chronological survey of the demands placed upon an instrument by practitioners of several genres of music over time, which means we can hear how an instrument evolves over a relatively short period of time.

Third, and I think this is the point, the stand-up bass is used as a way to look at a period of music we all don’t know much about. Sure, we know the big bands and blues artists, but this collection takes the obscure musicians of Gershwin and Joplin’s era and tosses them center stage, so even though the conceit is that we’re focusing on the stand-up bass, the result is a collection of popular music recorded around technical and performative innovations that resulted due to the bass’s introduction. Or, to phrase it another way, the bass playing is great on this album, but what’s more important is that this music exists at all because the stand-up bass allowed it to. The mingling of ragtime, blues, and jazz in the twenties—where western and diatonic scales were interchanged by white and black jazz musicians—created new compositional jazz modes dependant upon rhythmic syncopations that were not possible on the tuba. (Additionally, although this may only appeal to the history geek in me, this collection shows that the process wasn’t simply occurring in Harlem, but across the country.) The stand-up bass stood at the center of Modernist dance music that would pretty much dominate through Elvis.

Accordingly, the main focus of the collection is United States jazz where the stand-up bass would dominate until the late sixties, but we also get country, blue grass, world music, and musical numbers. It’s quite a variety, and even if the instrumentation tends to blend a lot of this stuff together (that’s not quite a complaint, but it probably isn’t surprising that a lot of this stuff sounds similar) the scope gives the implicit arguments a weight that matches the heft of the collection’s titular instrument’s body.

It is, as the previous Dust-to-Digital sets have been, an incredibly engrossing document. The first two discs run chronologically, highlighting one or two tracks from each artist. The sound, as much as possible, has been restored admirably, with a special emphasis on the low end. Each piece is accompanied with a band bio (hee—the bass played is listed first for each band), which makes this one of those documents you can read with while listening. Towards the end of the second disc, we get our Cab Calloways and Jelly Roll Mortons and Duke Ellingtons, but the real delight is recovering the innovators of the stand-up bass and their orchestras, musical brownies, playboys, boyfriends, ramblers, and sanctified congregations. Most of the material is instrumental, though we get the occasional singer. The final disc highlights the contributions of slap-bass innovator Bill Johnson; it contains a fabulous collection of the various work Johnson did in Chicago for two years (1928-29) before abruptly retiring from session recording. Within those two years he played country, jazz, ragtime, and gospel, in small and large band incarnations, and his playing is versatile and exciting enough that it makes the collection worth it on his merits alone.

Consequently, this is a phenomenal document in the academic and aesthetic sense (the packaging is beautiful, like something you would find in Laura Ingall’s bathroom, or the actual matchbox that Sebastian’s unnamed friend is arranging). Musically, I think Dust-to-Digitial has done a brilliant job curating and sequencing, although it’s tough to gauge how much staying power this has as a record. Although I could listen to the four Rev. D.C. Rice tracks everyday until the end of time. They’re enough to make me religious by proxy.