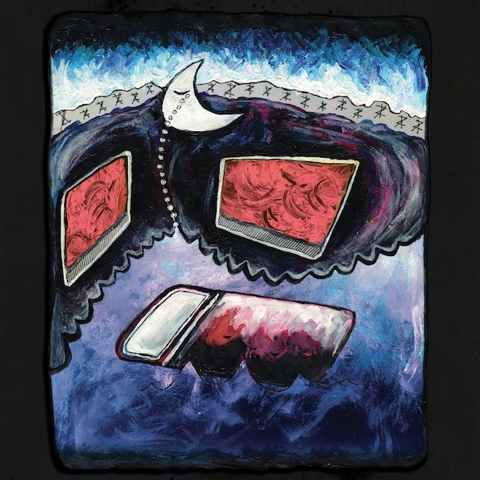 You haven’t really been listening. That seems to be the message of Hundred Waters’ new album, The Moon Rang Like a Bell. That’s super pedantic on its own, but imagine that message was conveyed almost subliminally, gently like a lover whispering into your ear while you’re sleeping. It begins with vocalist Nicole Miglis singing, a cappella, a literal incantation (“Show me love”) and ends with a simple entreaty (“Can you hear?”), but this is an album where lyrics split their time between mantra and prayer, blurring into stunning abstraction then reaching out in earnestness, in and out like waves. It is an album that beseeches, humbly. “Entices” might be the word, because it draws you in with simultaneous vulnerability and confidence, a snake shedding its skin under the glare of bright lights. In the way that only a soft voice can linger, it lingers.

Reaching out for comparisons, the word “folktronica” comes up a lot, but can we all just agree to retire the term? It’s a neutered, slight name for a genre, evoking a pedestrian interest in electronics and, without the vast history of folk and all its accompanying iconography behind it, a temporary flirtation. Not to mention that saying you make “electronic” music in 2014 is another way of just saying you make music in 2014. But most importantly, it seems destined to be limited in scope. Björk—who justifiably gets brought up in most discussions of this band—doesn’t have to be called “folktronica” (though her producers circa the turn of the century were Matmos, a band that epitomized the intersection of noodly IDM and live instrumentation), mostly because she gets to join the grand pantheon of pop music.

The Moon Rang Like a Bell is not exactly R&B, but it does belong in that conversation between indie artists reaching for a massive, populist sound and pop artists re-casting themselves as bedroom producers. It slips its head in the crowded door, listens, absorbs, and comes away with something bearing both a slew of recognizable touchstones—Aphex Twin’s more playful, nostalgic beats, Björk’s vocal acrobatics, Gang Gang Dance and Paavoharju at its fringes, tourmate Julia Holter’s deeply-personalized musical theatre—and something completely beyond reference. A helpful, but less obvious comparison might be Dirty Projectors: not because they sound exactly alike, but because they both aim for a rather lofty goal, which is to make something sinewy and defiantly unpredictable that can still achieve the immediacy of the best pop music. The difference being that Hundred Waters succeed in a way that the other band never could. Their ability to translate intimate moments into grand gestures and vice-versa is their virtuosity—and if you don’t believe “virtuosity” is the right word, watch Miglis actually play that dizzying, Debussy-ian piano part of “Out Alee” live.

But let’s return to Björk. Not Vespertine (2001) but Dancer in the Dark (2000). Not just the music, but that movie, and the whole idea behind it, that music as escape is both relief from tragedy and tragedy made manifest, a spiral of oblivion and fatalism where the cocoon you create to block out the cruel nature of the world also precludes any chance of defending against it. This album isn’t that dark, but it shares both the innocence and theatricality. It wouldn’t surprise me if the music video for “Murmurs” has exactly that movie in mind, even, with its slow-motion army of indifferent-looking orange-vested construction workers converging on a luxurious summer home under renovation, ending with Miglis caging herself in a small square of lawn with that orange, plastic fencing. It’s the choreography of working-class banality, pitched up to a tragic, and transcendent key. At the beginning, she looks directly at the camera, looping the line “I wish you / I wish you / I wish you” over and over again before finishing the thought, making sure that the viewer looks straight in her eyes long past the point where run-of-the-mill pop would have shifted gears. On the one hand, it’s mechanical to the point of abstraction, on the other, it’s direct, confrontational and uncomfortable; one of many points on this album where careful, even pro forma composition and emotional intuition operate in some kind of deep symbiosis.

Finally, she finishes that line: “I wish you would see what I see.” A lyric delivered with such purity of intent it seems self-fulfilling, melting every barrier between voice and eardrum. If the “you” spread liberally throughout The Moon Rang Like a Bell is a recipient for whom Miglis failed to establish this kind of direct connection, then it’s you, the listener, who takes his/her place. She tried to host you a birthday party on “Murmurs,” and then later, on “Broken Blue,” a massive homecoming parade, but neither made it, ending in a terrible accident, or maybe just postponed because of exhaustion and ennui. The latter is remarkable for how it shifts tones so organically. At the beginning, it seems destined to plod along with its flanged-out piano, until the vocals yank the song upward, cramming as many lyrics in between the drooping chords as can be managed, before the song collapses again under its own weight. Then, when you think it’s out of gas, it rushes up suddenly again—“Did you hear that? Someone’s singing in the backyard”—before the equally sudden disillusionment hits again—“Just wind blowing through.” These dramatic shifts sound like the stuff of Andrew Lloyd Webber on paper, but in practice, they chart the natural, inexplicable cycles of hope and disappointment.

If the “you” is, in fact, you, the listener, then what is ostensibly commiseration gets transformed into grace. At any rate, it doesn’t go quietly. As with much of Julia Holter’s Loud City Song (2013), I often wonder if prog would be more easily evoked in discussions of tracks like “Seven White Horses,” were there not a female vocalist in front of them. But with its gradual crescendo of militant drum-beats, its sudden break in the middle for glassy, off-tempo synth runs, the fact that it generally sounds exactly like what The Lamb Lies Down on Broadway (1975) would sound like if Peter Gabriel hit his peak forty years later, it’s hard to avoid the comparison. Likewise with “Down from the Rafters,” perhaps Miglis’ greatest vocal accomplishment here. At the beginning when the track drifts beatlessly through an almost backwards-sounding melodica, her voice seems to be stretching out time. Before I looked up the lyrics I felt the vague sensation of her attempting to pull and spread something viscous and wet and a little uncanny just to find out she’s singing “I woke free / From something clutching me / Pulled its awful, leaden, cold, clammy body / Out away from me.” That is uncanny, and if you’re not convinced that’s an utter triumph of music perfectly mirroring lyrics, then perhaps the latter half of the song, where she sings about climbing from the rafters and her voice ascends gradually upwards just to see-saw precariously back and forth on a massive interval, will. Call it scalable concept rock: you can either hear it as operatic and colossal or hushed and confessional, but either way it seems to transcend its own humble origins, carving emotions into something greater than themselves.

From the other end, even The Moon Rang Like a Bell’s most obviously lump-in-throat, glacially-paced moments betray a kind of playfulness; that lump-in-throat reaction itself being not to the obvious sadness of the content, but the struggle, the defiant push against loneliness and isolation. Take “Chambers (Passing Train),” the literal beating heart of the album, a track so celestial it would be impossible to close your eyes and imagine anything not moving in ultra-slow-motion. (Here, let me help you, play it while watching this video from photographer Adam Magyar). Even here, after notes seem to stretch out into infinity, she suddenly intones “Every yell it longs for you,” spiraling melisma up and up and curlicueing around like smoke. Imagine Mariah Carey guesting on one of the more slow-burn Sigur Rós tracks and you get a sense of not just how beautiful it is, but also how bloody far it is from pretty much anything anyone’s doing right now. Even at its most seemingly ascetic, The Moon Rang Like a Bell is among the most generous, tender, radiant albums you’ll hear all year. It just wants your ears.