1. The Appearance of a Wise Child
2. Serious like a Pope
3. Add an Key of Humanity
4. Melon 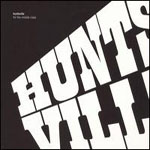 For the Middle Class

I’m sure this experimental trio’s Norway has its fair share of bedroom communities, but none of them, as far as I can tell, are called Huntsville. On the other hand, like the ubiquity of a white bred “Smith,” “Huntsville” might as well stand in for “shady little town” in North America—or at least all the ones that come up on a Google search that seem to equate community theatre and sleepy universities with “things people will want to visit our ‘where the fuck is that?’ town for.” Is that how the band name and the album title are related? That this music could cause parties that shat on a middle class sense of decorum in every single Huntsville at once, and a satellite view would show that if we connected the newly-funky dots littering the land we could spell out “Ap + SV + Sp = BFF”? I love socialist conspiracies! Especially ones that sound pretty.

This is harsh and inviting experimental work, lush artwork that feeds both upon itself and upon the temporal and tonal presumptions of its audience. And even if the political character is only literal as explained by the title (“we’ve written a lovely song for you, bourgeoisie, and it will pulverize your face”), divorce the music from the nomenclature and you still get some blistering ideology manifested in the way this sound affects your body. Ostensibly a guitar/bass/drums unit, all three band members exploit electronics and clever approaches to their instruments, but the biggest appeal here is the way they arrange themselves, running different time signatures and tempos at one another like “beat” is as loosely defined, self-serving, and contingent upon circumstance as “middle class moral values.” With only four tracks—really, two long pieces, their segue, and a simmering denouement—Huntsville somehow manage to sound like a whole lot of other bands while never straying from their propulsive and progressive electronic free jazz cycles. This should sound like Krautrock, given what it seems they set out to do. Instead, it sounds like Supersilent and Fennesz and Tim Hecker with a pulse.

The first of the extended pieces, “Appearance of a Wild Child,” starts with high-pitched synth squeals and a chugging surge of low-end bass treatment underneath. It shudders for about half of the track, but its tempo is not the track tempo; the real beat is a combination of quick repeating strikes from one of percussionist Ingar Zach’s electronic Indian synth boxes (I assume it’s a tabla machine; it sort of sounds like really tight gamelan heads) and his incessant, flippant high hat riff. It’s a marvelous juxtaposition; the low bass synth is leveled and sorted perfectly to skirt the actual tempo without disrupting the flow, causing a disorientating sensation similar to Ricardo Villalobos’s work. Meanwhile, guitarist Ivar Grydeland employs a whole arsenal or electronic, finger, and bow-based stringing techniques to color the mix, effortlessly evoking drone-based ambience and Ornette Coleman’s polyrhythmic approach to free jazz (first seen on The Shape of Jazz to Come [1959]) at the same time.

And when everything drops out except for the tabla machine—to give the track some space before it morphs into something else entirely, of course—the sudden “correct” time is drawn further into relief: nothing is competing with your tapping fingers anymore except for the fact that the riff is probably too quick to keep up with. And so the whole thing morphs into an anthemic, star-gazing piece the Clogs would be proud of, and even when a stray synth rises somewhere around one o’clock in the right channel to again offset the rhythm, the effect is to send the music soaring, tearing loose from the anchors of signature as the only vocals on the album are intoned: “the appearance of a wild child” only happens, apparently, after everything else is laid to ruin. Bassist Tonny Kluften starts to play ascending notes on a stand-up (and his sense and touch are fine throughout) as Grydeland switches to acoustic. The band begins to work towards the end of the track with a brilliant improvisational fervor, even as that tabla soldiers on.

“Serious like a Pope” marks a transition; it’s superslow jazz that relies on drones and portamento to slide quietly by. Kluften’s bass is a miracle of old fashioned string-slapping, restrained and thick as it underpins the mournful reverb of Grydeland’s sighing electric. Even though the track’s resolution is, well, the imposing weight of “Add a Key of Humanity,” it gets there by slowly expanding, ballooning from a quiet duet into a ghostly ballad. It’s also the reason why describing this album as “jazz with electronics”—which makes it sound like St. Germain or some such bullshit—just doesn’t really work. This track is plenty experimental without really employing anything besides some basic jazz components.

Zach ascends on a rolling military snare riff to begin the album’s 22-minute opus. Surging out of some ambient cyclic clatter that surfaces between it and “Serious like a Pope,” the drums are complemented by what sound like vocal accents—think Mike Patton’s “hup” in “A Small Victory”—as the bass begins to descend again and Grydeland just plays plaintive arpeggios on his high notes in the corner of the mix. Kluften’s sense of space is really important here; with the other two musicians remaining fairly static, his constant shifts through tones and genres coupled with his ability to make it all sound solemn really propels the early minutes of the track. The clouds clear, Zach plays alone, and then a thunderous synth riff scores the mix. The interplay throughout this section is absolutely fantastic, like different sections of a serrated knife. Grydeland provokes some incendiary noise from his guitar as Kluften interacts with a repeating piano figure. Zach’s drum changes are so subtle you might not notice anything, but he carefully plays with tension and signature and velocity throughout—he realizes “good drumming” isn’t the same thing as “big fills”—and even when he starts grinding to get the band into the next section, he is still centered in the space of the band’s sound. Which is more scary than if he had let loose, I think.

And then: I’ve figured out what the key is! It’s a banjo! “[Banj]oh the humanity!” Grydeland and Kluften totally switch gears as Zach takes a break from the sticks, undulating at different paces until the banjo and bass lock into an insane workout over Zach’s renewed and vibrant drum patterns. Stray guitar noises, synth squalls, and liberal guilt can still be heard in the background (there’s obviously loops being used throughout); the banjo starts chugging on chords; the bass takes a fucking bass solo of all things; and suddenly, from what seemed like a corny break, we find ourselves in the midst of one of the most intense and interesting jams recorded last year. Grydeland takes his time switching back to guitar, and he builds his textures carefully, looping some parts and randomly inserting others (there’s some surf guitar, and some beautiful distortion work). And yeah, the feedback that closes the track is kind of cheesy, but the road there was so vibrant they’ve earned it, especially since the banjo returns with some awesome drunk picking, closing out the track in a bed of subsiding violence.

“Melon” is a closing shot; it’s a nightcap; it’s lame and entirely awesome; a drunk guitarist trying to pick us up but unable to play; a fallow machine still sucking on binary code to provide a “beat” in the background. If you took minimalism literally, there’s nothing moreso but silence. I don’t know if I love it (especially relative to everything else) but I do know that making up fictional stories about why the band thought this was a good way to end the album makes me giggle. Because it’s pretty, but it goes on maybe a bit too long, and it keeps pretending to be over but it isn’t, but maybe the point is just that, for being so simple, it’s still pretty lovely.

I heard this album right after we submitted our lists for the year-end, but this would have almost certainly been in my top ten. It’s gorgeous, adventurous, it covers a wicked amount of ground in the space of four tracks, and it’s just another reason why Rune Grammofon rocks. This doesn’t sound like much else on that label, although it’s obviously influenced by other RG groups. It certainly doesn’t sound much like Humcrush or moHa!, the other two fabulous RG free improvisation groups. Huntsville are a wonderful new edition to the experimental ranks of jazz and electronics, both in their seasoned instrumentation and the obvious joy they take in created music with character, soul, and humor, as well as a lot of broken middle class dreams.