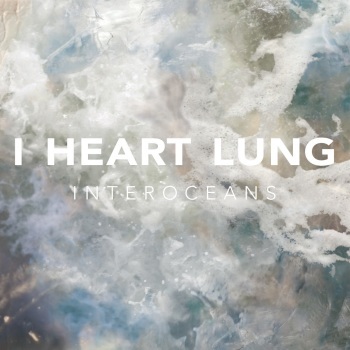 The way those anticipatory drum rolls and lightly distorted, ringing guitar chords open I Heart Lung’s Interoceans, almost anything could happen. As it stands, the pronounced intro isn’t so much a false promise as it is a carefully controlled swell that could break at any time. A lot of artists have employed large bodies of water as extended metaphors but few are as suited to the comparison as I Heart Lung, the duo of Chris Schlarb on guitar/electronics and Tom Steck on drums. And it’s not just the occasional sample of waves or birds flapping their wings that does it but the way the band fashions these natural phenomena into something serene just as it seems to be morphing into violence—focused on the moment the impending climax disperses rather than the climax itself. Time on Interoceans is circular: the development of each of the four tracks seems to lead right back to the beginning.

Which isn’t to say that there isn’t at least a hint of development over the course of the album itself. “Upwelling” only really works as the opener that it is and then “Overturning” seems obsessively concentrated on anticipation, even as it unfolds layer upon layer of gorgeous instrumentation. The pivotal moment of the album may be around the 3:30 mark of “Overturning” when Kris Tiner’s trumpet enters with some of the most liquid and anchorless playing I’ve ever heard. But while the playing is fantastic the overall sound of the album obviously has everything to do with the approach that the core duo takes to recording: start with a basic guitar/drums drone, get musicians to improvise over it, then cut and paste everything to keep it from being a free jazz-lite experiment.

The production can be as frustrating as it is gorgeous: the sense of natural beauty that the band taps into is so obvious from the outset of listening to Interoceans that it doesn’t really have a lot of places to go after multiple listens. So I find myself drawing back to the individual musicians; particularly Nels Cline, who dominates the second half of “Overturning” with slide guitar and most of “Undercurrent” with sitar. Steck’s drumming, which revolves around clusters of sound rather than any actual “rhythm” (at least from a Western perspective), and the droney guitar do what they need to even while Cline gets most of the focus.

It’s odd that, as rootless as a lot of the music feels, it’s a far cry from the non-idiomatic playing of a lot of the free improv bands that I Heart Lung are sometimes associated with. They obviously have a lot in common with the electronic/jazz crossover that bands like Supersilent have pioneered, though as a whole come a lot closer to Arve Henriksen’s solo work. Like Henriksen—or much further back, Alice Coltrane—they find the commonalities between jazz and Japanese and other Eastern musical forms, which embrace different modes but rarely straight-up atonality.

The only time the band seems to shed both the focus on individual parts of jazz and the relatively comfortable density of drone/ambient music is on closer “Outspreading.” Here they manage to at least hint at an edgier side with more unhinged electronic oscillations but also allow for more conventional rhythms to occasionally seep in. Ironically, this actually makes the music more unpredictable, allowing organic shifts between free-form ambience and more coherent, propulsive sections, like the last few minutes of the album where the band finally embraces an emotionally driven post-rock climax. After a slow multi-tracked trumpet plays over rumbling static, thundering toms peal through the air as several guitars seem to bend woozily around single notes. It’s an odd ending to an album that otherwise barely hints at a build-up. Perhaps the next album will be tsunami-themed?