Bonus Tracks (from the Mute release):
12. The Painter
13. Glasses 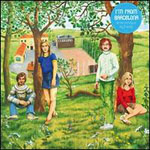 Let Me Introduce My Friends

This is a backlash. I mean, technically, I am lashing back. This review would not exist had Pitchfork not decided to give this band coverage; one wonders if bands like this would exist at all if Pitchfork did not give them coverage. I realize bitching about Pitchfork is old-hat, and that’s why I don’t really do it much. The Fork’s done their share of good for the universe, and me complaining about their ongoing cultural domination is pathetic like Joey Fatone asking for a guest spot on Futuresex. They ain’t listening, and for all my gripes with the site -- the neutered writing, Schreiber’s well-fed sycophancy, their ability to talk to Lupe Fiasco -- I still find myself wondering what they’ve got to say about, say, Modern Times, and I cheered for the oddly appropriate overenthusiasm they directed at the new Thermals record.

But seriously, what is this I’m From Barcelona shit? And why would the Fork lavish such praise on it? This review, that fuck-you score above it (a “Terrible+,” according to our ratings), are a kneejerk reaction, my physical human response to this sickly fucking sugarwater music, and an admission of my willingness to function as a cog in the internet criticism megamachine. When Pitchfork drops an 8.3 on a record, the laws of e-bullshit demand that when the bandname gets Googled a review somewhere comes up calling it, oh, let’s say, a “self-fellating fuckwedge of oozing sentimentality.” You are reading that review. I am writing it, fulfilling a function. Come with me.

The music eats itself, demanding hate, as tirelessly obnoxious as an alcoholic that finds himself funny. “We’re From Barcelona” is an insipid trumpet line, that’s it, as spicy as but unfortunately less tasteful than an El Rodeo burrito; the verses and choruses are just repetitions of this line, and when the song strives for transcendent overdrive, this same fucking line is repeated in Kidz Bop! chorale Technicolor grandeur. The music lacks any functional dynamism or tonal complication; it swells and grows limp as demanded in turns by the production only. This zero-sum anti-policy carries over to the lyrics, where everything is what seems, which is, of course, nothing. Thus “Collection of Stamps” is about “badaba” and stamp-collecting, “Treehouse” is (wistfully) about treehouses, and “Oversleeping” is surf-rock Christmas music about oversleeping. Had I not stolen this album off the internet like everyone else that’s ever heard it, I would here ponder how a jewel case could be pressed for an album that, when both sides of the equation are evened out, doesn’t even exist.

Of course, the band is real, all 29-gimmick-loving-members of it, and I refuse to do any research on this, but I assume they all wear robes or dress like animals or state mascots or something. Which reminds me of a joke: who would win in a squirt gun fight between I’m From Barcelona and the Polyphonic Spree? Answer: Danielson, because they’d bring paintball guns. See, I’m not an entire sourpuss; Ships (2006) revealed itself to be one of my favorite records of the year, demanding repeated listens despite my initial distaste. But Danielson packed more songwriting depth into the chorus of “Time That Bald Sextant” alone than these noxious fuckwits can stuff into the entirety of Let Me Introduce My Friends, an album which, at thirty-four minutes, is fuckin’ pushing it as is, padding a few minutes of silence after pensive bed-wetting closer “The Saddest Lullabye” before the insult-to-injury native-tongue secret track finale.

I’m oversimplifying here, but Michael Chabon makes the point in The Amazing Adventures of Kavalier & Clay that “low” escapist art serves a calling as high as any other. Chabon’s ruthlessly personal book traces the unbearable hardships that dot his characters’ lives, but he is unflinching in their portrayal as a direct contrast to the art (comicbooks) that those characters create. In theory, that’s what I’m From Barcelona is -- something pure, something fun and unchecked and free. It’s a cute aspiration, but these sentiments don’t work on their own. Chabon couched his in a greater interpersonal melodrama, the Beatles checked Paul’s twee fiddlings with Lennon’s brooding seriousness, Danielson’s core point is one of survival. I’m From Barcelona’s core point is stamp-collecting and treehouses and marshmallows. They are a handful of shit, of wan, barely extant songs and feeble musings, of worn gimmickry and careful over-production, aping Sufjan and a dozen others, flung against a cultural brick wall. I’d like to hope that this won’t happen again, but you and I both know it will.