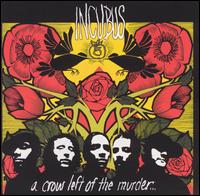 A Crow Left of The Murder

See that percentage on the left hand side of your monitor? Not too good. Considering the subject matter here, I would forgive you for thinking that the underwhelming rating foreshadows what's going to be a series of potshots at an easy target; a cheap way for an indie snob to blow off some steam. But that ain't our style here at Cokemachine, and the 59% reflects actual disappointment from an Incubus fan that the band's fifth album isn't very good. They've been a guilty pleasure of mine for some time, but the bizarrely titled A Crow Left of the Murder finds the band out of touch with what attracted me to them in the first place: surprisingly solid songwriting and a degree of warmth seldom found in the unassailably bleak, third rate metallic shit that comprises much of mainstream radio these days.

My relationship with Incubus began back in college when a friend insisted I borrow his copy of their 1997 album S.C.I.E.N.C.E., despite my insistence that it was likely rap-metal junk. In fact, it was far more interesting than I had originally envisioned, being an extremely schizophrenic metal album that managed to incorporate visible elements of jazz and funk without sounding embarrassing. I liked the fact that the lead vocalist sounded a hell of a lot like Mike Patton, and to its credit, S.C.I.E.N.C.E. often had a serious Faith No More vibe going on; maybe what the follow-up to The Real Thing would have sounded like had it been merely very good, as opposed to the completely mind-blowing document that Angel Dust was.

So when I heard 1999's Make Yourself, I was a little confounded as the album was sooooo toned down from their previous release. The vocals didn't sound so much like Patton anymore, and the manic energy had been replaced by a series of basic modern rock tracks, relatively inoffensive and primed for maximum radio play. But after accepting the fact that the band was aiming for a wider audience, I still found myself liking a majority of songs on the record. "Stellar," "Pardon Me," and especially "Drive" were all huge singles, and surprisingly, they're all very well written songs, containing extremely catchy choruses and tight musicianship while avoiding the refried grunge, faux-Vedder sound. The band's success can largely be attributed to the charisma (and good looks) of frontman Brandon Boyd. While his Tony Robbins-esque self-motivation lyrics were a touch cheesy, at least he didn't hate on his dad, and his vocal yearnings painted the warm picture of a sort of California everydude. Anyway, few men would be able to make forehead slapping lines like "don't let the world bring you down/not everyone here is that fucked up and cold!" sound more like sympathetic encouragement than lazy clichés (homeboy would probably make a great politician should the rock thing ever grow tiresome). But despite some more decent singles, 2001's Morning View ramped up the wuss factor too much, resulting in a dull record that my roommate once said sounded like "it was written just so the band could get laid." Magazine articles about Incubus were now mostly focused on non-musical topics like Boyd's loving relationship with his mom, which while nice, isn't too…uh…rock n' roll.

Incubus would want you to think that A Crow Left of the Murder is their "experimental" album that they've written to prove that they're a relevant band not entirely comfortable with being MTV megastars. In reality however, the only discernable differences between Crow and the last two Incubus records are faster tempos, crappier songwriting, and a noticeably "political" aspect to the proceedings. It's not as if Brandon Boyd's lyrics are any more or less clichéd than they've been in the past, but they sounded better when he was singing about earnest confessions as opposed to social ills, and his writing style doesn't really shed much light on what he suddenly seems so angry about (if nothing else, he's not voting for Bush). Furthermore, his vocals lack the inviting warmth evident on older Incubus releases, sounding strangely distant and often lapsing into smugness ("Talk Shows on Mute"). But perhaps the most frustrating aspect of Crow is that barring opener "Megalomaniac," it suffers from a lack of anything that could be considered a hit single. While I applaud the band for making a conscious effort to leave their comfort zone, there's also something to be said for playing to your strengths, and an ability to write quality mainstream rock singles is not always something to be ashamed of. Crow has precious few hooks to grab on to, leading me to wonder how many of these songs will actually be incorporated into Incubus's live show.

Regardless, I've been enjoying a handful of the songs, but not for reasons I would normally associate with this band. The weaker songwriting has actually allowed me to fully recognize what an accomplished guitarist Mike Einzinger is. He's equally adept at jazzy soloing and effects-driven atmospherics as he is power chords, and many of the songs contain extended bridges that merely serve as an excuse for him to go off. Furthermore, he appears to be on a serious Alex Lifeson kick, which I'll never mind being the cheesy-ass Rush fanatic that I am (the bridge on "Pistola" sounds enough like "Secret Touch" from their recent Vapor Trails album you'd think they had cut and pasted it with Pro Tools). "Sick, Sad Little World," "Priceless," and the title track all feature similar proggy moments that guitar dorks will enjoy. But whereas the accomplished guitar work used to take a backseat to excellent songs, now it's the main reason to listen, which probably won't bode too well for album sales considering how many 17-year old girls own copies of 2112.

Incubus has commented in recent interviews about how they think the Crow material hearkens back to the olden days in terms of heaviness, but this too is wishful thinking. While tracks such as "Leech" and "Priceless" definitely seem to be consciously aiming for a more S.C.I.E.N.C.E.-like sound, the band seems unable to get off the fence straddling maximum rockage and radio friendly pop-metal, and the music sounds watered down as a result. It doesn't help that mainstream rock guru Brendan O'Brien's immaculate production has a tendency to cast a haze over the proceedings, forcing the music to sound strangely muted when it should be jumping out of your speakers. Ultimately, A Crow Left of the Murder features enough decent bits to be respectable, and I actually like it more now than I did two weeks ago, which is a good sign. But the drop off in songwriting quality is too noticeable to be ignored. Granted, Incubus's fan base is large (and rabid) enough that Crow would have likely gone platinum even if it consisted of the band taking turns shitting into a microphone. But the heart of a 17-year old is a fickle one, and I'm guessing that after a few listens, Incubus's primary fan base will have likely cast Crow into the used bins in favor of the new Lostprophets record. Unless Incubus has a burning desire to play the state fair circuit, the songwriting will need to return for album number six.