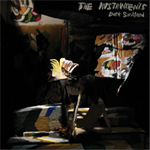 Spring has finally sprung my small suburb from the corroded bear trap of another profoundly disheartening winter. Streetlamps now provide pleasantly romantic lighting conditions rather than serving as desperate beacons amidst blankets of hostile precipitation. The world is a lot more amiable, at the very least ambiguous; in flux rather than outright mean. My cynicism is probably too strong, but I’ve long thought nothing could live here.

But then came Dark Småland, a record clearly synthesized in the glow of the streetlights that line this purgatory-on-earth, a manifestation of quiet dissatisfaction with the ills of a perceived normality: a handcuffed housewife sobbing into a pillow, surrounded by the earth tones of her bedroom, suppresses discontentment, which has long since rotted and reconfigured itself as a morose acceptance of monotony, an acceptance that can only seep out in subdued catharsis, kind of like heartburn.

The Instruments’ third full-length—built seemingly on the breasts of E6 cameos like Jeff Mangum, Will Cullen Hart, Peter Erchick, and John Fernandes—not only encourages the (ab)use of numerous intoxicating substances (its deliberate pace and gorgeous arrangements practically demand it), but takes steps towards explaining why any of us might need them in the first place. It’s like the album emerges practically whole from existential filth wrung and collected from the sweat-drenched hands of angst-stricken teenagers turned malcontent adults.

In the fore is Heather McIntosh, of the Japancakes, Circulatory System, and costumed Gnarls Barkley tour, and here she leads an aimless walk into the twilight that makes more sense than your morning commute in purpose and method. So, discontentment pervades Dark Småland: when surrounded by concrete and the confines of an overcrowded metropolis, it yearns for open space; when provided with acres of green, it wishes not to be so lonely. It is a manifestation of perpetual depression; a feeling of entrapment that can subsume the human consciousness. But it also avoids predictably overindulgent wallowing, mostly because of its measured sequencing and many of its songs’ interplay between anxiety and expectation. It seems to be perpetually in motion, always in search of something more interesting, more meaningful. The arrangements bustle, never feeling oversaturated but instead unabashedly complex, as complex as the impossibly large concepts they attempt to explore.

“Ode To The Sea” is a morning of ambitious thoughts and unmoving lips. McIntosh’s voice is multitracked, her measured, somber tone clashing with a sweeter, more hopeful self, throwing off sparks and illuminating an existence consumed by neither, comprised of both dread from past failures and the sense of hope required to pry open one’s eyes in the morning. Thankfully, there are no bold proclamations here, at least not in a traditional sense: no banners, no indignation, and perhaps its unassuming nature is a detriment because this feels every bit as urgent as Falco’s thunderous denouncements of man on Curses (2007) or Costello’s sexual frustration on This Year’s Model (1978). And yeah, one could argue this is all yearning and no action, but, while the album’s sense of urgency is draped in layers of desolate overtones, its exigency is apparent in that it seems to hold something larger in its robust arms: it doesn’t require propulsive basslines or swelling choruses because its exhaustion, its fucking depression, is heartbreaking enough. No crying out in pain; it quietly licks its wounds and soldiers on because repression is a necessity of life.

The existential bent of this is so severe it may cross dimensions, but it still carries a visceral wallop because, in the context of “Early Lights”’s tumbling pianos and subtly moving electronic accents, fits of nostalgia and a return to a more naïve, hopeful self is inevitable. The track is a photograph of more desperate moments; the sentiment is driven home by trembling strings that highlight McIntosh’s pleading tone. And for all the weariness inherent in Dark Småland, there is a profound sense of curiosity in its complexion. Perhaps a majority of the album could be filed under “morbidly curious,” but I’m speaking of inquisitiveness in its purest form. On “Papillon,” lilting guitars wander over frantically fluttering strings, pushed way to the back of the mix, troubling clouds in the distance, as McIntosh lies on cracked pavement, exploring the folds of her own squishy brain as passively as what hovers above. There’s an affecting innocence to all of this that’s instantly relatable, simple queries aiming for big questions.

But the ability to relate to Dark Småland and its virginal pining doesn’t make it a great record in the same way For Hero: For Fool (2006) wasn’t so stirring solely because it tackled concepts startlingly close to this middle class white kid’s reality. Overarching concepts aside, the music that the Instruments (I feel like I’m making a bad pun here) craft on this collection is astounding. Their propensity for dense, intricate compositions frequently yields beautiful results, but it also deepens the album’s nuanced veneer. A resolute cello, occasionally joined by muted horns, provides “Pastorale” with sordid overtones, but beneath the melodrama are heartening guitars accompanied intermittently by a piano, breaking through when the strings are dropped out at the song’s conclusion (as close as Dark Småland ever comes to a triumphant coda). “Paths of Low Flying Birds” takes a similar approach, propitious strumming beneath a foreboding cello, clashing sentiment forming a delicate balance, like a disaffected teen on the edge of a nervous breakdown, the ugly and redeeming qualities of life commingling.

God only knows what circumstances besotted McIntosh to culminate in something so starkly dissatisfied, so quietly mournful. Perhaps it really was just nothing: a common humanity, a typical life, but parsed out in debilitating facets, capturing the cyclical and paradoxical nature of a sad, claustrophobic existence in stunning detail. For any full-length, especially one of so few words relying so heavily on repetitive intonations and careful instrumentation, this is a feat of awesome proportions; a sterling achievement that captures the ineffable, rendering it indescribably glorious.