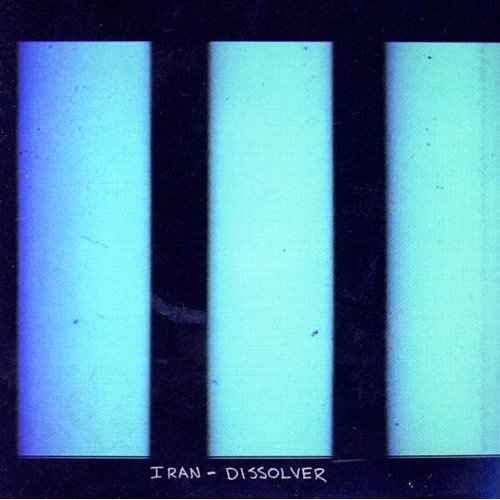 Well, here’s a disappointment so mild I can barely taste it. I think I’m disappointed, maybe, but I’m not sure how much or wherefore. It’s not really a matter of expectations, either, because while Iran’s first two lo-fi records were noise-pop discoveries, the tracks that preceded this album by over a year (“I Already Know You’re Wrong” and “Buddy”) prepared the listener for a change in direction that, though no less valid, was perhaps less bracing than the caustic gleam of a “Four Armed Star,” less base than the gutter flow of “Pick Up” on through the “/” and out into the static scape of “Stillborn,” more fully assed than an accidentally great track like “San Diego.” But I really liked “Buddy” when I first heard it and just about loved “I Already Know You’re Wrong,” hoping that Iran would birth this new version of themselves fully-formed where before they made art out of unfinished states. Unfortunately, Dissolver only takes them halfway there, ironic since halfway was where the band once sculpted its peaks.

Part of the issue is just how much better suited the band’s previous aesthetic was in clothing the front man. Lead singer Aaron Aites’ whispering and murmuring would be buried in the heavy, scratchy fabric of the track, his head waiting to push slowly out from under the sweater only when he had some heartbreaking knowledge to drop. The cleaner, more “lyrical” Dissolver exposes Aites as the kind of guy that can manage about two or three poignant lines a song that he accentuates with a lot of other lyrics that feel tossed-off or incidental. The titular lyric of “I Already Know You’re Wrong” followed by “but I’m not letting on” makes for an excellent coda but allowing the bland verse describing a concert mishap (“I watched you drop / I saw your head hit the stage”) to be so clearly intelligible reveals a band that seems less self-aware. Because right now Aites’ lyricism is only half worthy of being fully heard. I really wish I couldn’t hear the punchline at the end of “Buddy,” in fact.

The other part of the issue is how much better suited the band’s previous aesthetic was to, like, being an aesthetic. Or at least their aesthetic. This doesn’t really sound like TV on the Radio (with the exception of the first section of “Can I Feel What?”), which I think was the concern for some when we found out it was gonna be more plush and knew going in that mutual band member Kyp Malone and producer Dave Sitek were gonna have their mitts all over this thing. But who knew that Iran wanted to be a poor man’s Pavement? “I Can See the Future” is the awful opener, Barenaked Ladies vocal melodies and chintzy guitar riffs and woohoos on the chorus. That’s like a bad band’s concept of Pavement, see. “Where I’m Going” would be a good band’s right-on Pavement impersonation, but here’s the thing: why is a good band wasting time imitating something else? Setting aside their past work for a moment, there’s more than enough craft and inspiration in Dissolver itself to prove that Iran are indeed a good band. I keep going back to “I Already Know You’re Wrong” because, seriously, the way that song unfurls is a thing of beauty. Even there and on tracks like “Buddy” and “Where I’m Going,” though, it’s Iran working wonders with linear progressions whereas before they were careening down detours and sidewalks (their road less traveled often not even a legitimate road)—or thrashing in one place like suicidal assholes who found some sand to sink in, forcing us to reach out because of the pretty songs escaping their suddenly filling, gargling throats. Forced to reach because we were afraid we’d never hear those ditties again and we knew we’d quickly forget them. All the dirt was impetus for us to care; Iran’s music is only half worthy of lamination.

On Dissolver “Digital Clock and Phone” is a slice of mannered chaos thrown into the mix with no song to call home. It is the grime off Iran’s boots as they stand now on solid pavement. Here they are, showered off, safe and sound. So right now it’s much easier to turn away.